How Have Fillies Fared In The Preakness? 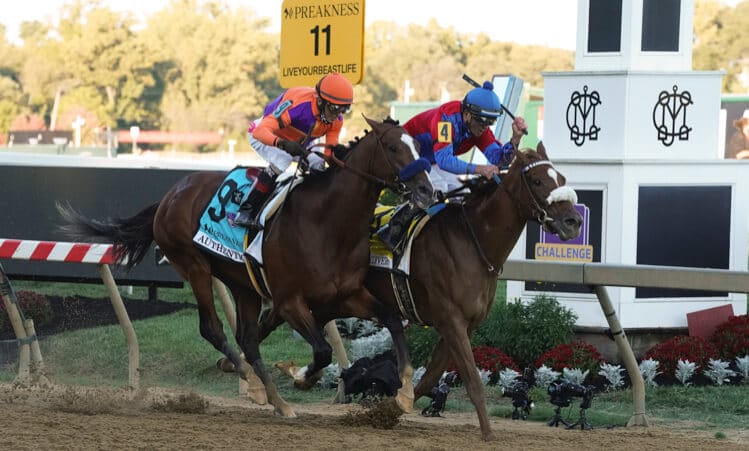 On Saturday in Baltimore, the legendary trainer D. Wayne Lukas will attempt to tie a horse racing record by saddling his seventh Preakness Stakes winner at the age of 86. If he pulls it off, his horse, Secret Oath, will become just the seventh filly to win the Triple Crown’s second leg, which was first contested at Pimlico Race Course in 1873.

Six female champions in 147 races may not seem like much, but the Preakness’ Triple Crown counterparts, the Kentucky Derby and Belmont Stakes, have only seen three fillies apiece cross the wire first over an equally long span. Up until 1939, it was fairly common to see fillies entered in the Preakness Stakes betting field, with females winning four times in 49 starts until that point. But then the race went 41 long years without a female entrant, a drought that ended when Genuine Risk came into the 1980 race as a 2/1 favorite after a Kentucky Derby win.

As Genuine Risk rounded for home, the eventual winner, Codex, veered far outside and bumped the filly, which finished a game second. Genuine Risk’s connections sought to have the result overturned on account of interference, but stewards rejected the claim.

Codex’s trainer? None other than D. Wayne Lukas, then entering the Preakness winner’s circle for the very first time.

The next time a filly entered the Preakness was in 1988. And, once again, this filly, Winning Colors, was a Derby champion who went off as the morning-line favorite at odds of 9/5 at Pimlico. Ridden by Hall-of-Fame jockey Gary Stevens, she stalked the pace just outside the race’s early leader before getting overtaken by Risen Star shortly before the turn for home. She finished a spent third.

A ‘super filly’ holds on

After finishing fifth against the boys in the 1999 Kentucky Derby, the Bob Baffert-trained Excellent Meeting tried her luck in the Preakness, only to pull up before finishing. Another decade would pass before a bona fide “super filly,” Rachel Alexandra, entered the Preakness fresh off a Secretarian Kentucky Oaks victory in 1999.

So talented was Rachel that her jockey, Calvin Borel, elected to ride her instead of Kentucky Derby champion Mine That Bird in the Preakness. He chose right: Going off as the 9/5 favorite, Rachel held off a charging Mine That Bird down the stretch to become the first filly to win the Preakness since Nellie Morse did it in 1924.

The next female entrant was Ria Antonia, who was entered against the boys even though she finished a pedestrian fifth against her similarly gendered counterparts in the 2014 Kentucky Oaks. Despite Borel taking the reins and contesting the early lead, the filly faded in the far turn and finished a distant 10th.

A stretch duel to remember

Six more years would pass before the Preakness would play host to another filly, Swiss Skydiver, who’d finished a game second in the fastest Kentucky Oaks ever two weeks prior to Baltimore’s biggest race.

Like Secret Oath, who overcame a troubled trip to finish third in this year’s Arkansas Derby before winning the Kentucky Oaks, Swiss Skydiver challenged the boys in a Derby prep, bested only by Art Collector in the Blue Grass Stakes in Lexington, Kentucky. At morning-line odds of 11/1 in the Preakness, she was considered a serious threat to finish in the money, but not to win, what with the Baffert-trained Derby champion, Authentic, going off as the 3/2 morning-line favorite.

What ensued was one of the most scintillating two-horse stretch duels in Triple Crown history. After stalking a modest pace, Swiss Skydiver collared Authentic just before the far turn, leading by a neck heading into the stretch. Running away from the rest of the field, the two horses went stride for stride all the way to the wire, with the jockeys exchanging appreciative fist bumps and Swiss Skydiver winning in a photo finish.

2020 was unique in that the Triple Crown races were run in the fall, after the Saratoga summer series, on account of the pandemic. This meant that Swiss Skydiver had a few extra months to mature, but so did her male counterparts. Scheduling anomalies aside, among all the fillies who’ve run in the Preakness in the modern era, Swiss Skydiver is clearly Secret Oath’s closest comp.

Unlike Swiss Skydiver, Secret Oath will not have to defeat a Derby champion come Saturday, what with the stunning decision by the owner of longshot winner Rich Strike to skip the race and bypass a chance at a Triple Crown. At competitive odds of 9/2, Secret Oath will be in tough against the favorite, Derby runner-up Epicenter, who was the pre-race favorite at Churchill Downs on the first Saturday in May before Rich Strike motored by on the inside in the nick of time.

Both Swiss Skydiver and Secret Oath finished in the money against male horses in a Kentucky Derby prep race, and neither entered the Kentucky Oaks as the favorite before impressive showings. But if there is one distinction between the two fillies, it’s that Swiss Skydiver posted far swifter speed figures prior to the Preakness.

Speed’s not everything in horse racing, but it means an awful lot. Hence, much like Rich Strike in the Derby, Secret Oath will likely need a perfect trip to secure her spot in Preakness lore.