Using the combined reach of WSOP.com and GG Poker, a 50-year tradition has a chance to continue 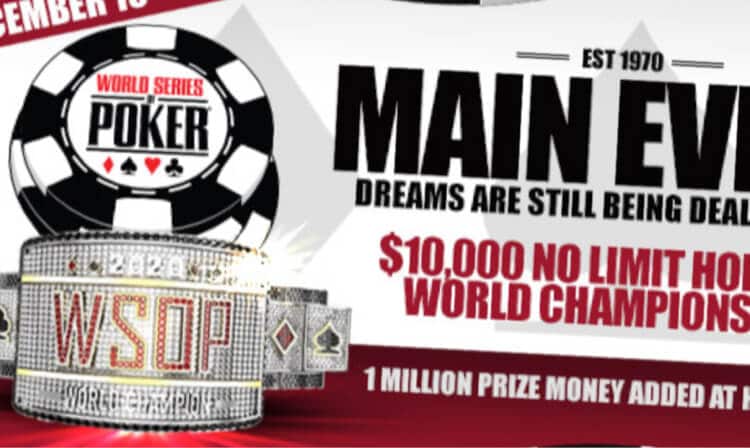 The COVID-19 global pandemic held a strong hand before the flop, on the flop, and on the turn. But the World Series of Poker isn’t folding. Instead, WSOP organizers decided to check-raise all-in on a draw with one card to come, knowing they have a few ways of getting there even if the virus doesn’t toss its hand into the muck.

Yes, there will be a WSOP Main Event in 2020, the venerable tournament series’ brass announced on Friday. Whether it will reach its conclusion and crown a champion during this calendar year is uncertain; that’s the plan, but COVID, which is spiking again and will soon force three casinos in Detroit to close, has proven itself a potential impediment to even the most carefully considered of plans.

In theory, though, here’s what the WSOP is aiming to do:

The WSOP has built very intelligently on the proposal offered by US Bets in June, which included an international online tournament hosted by GGPoker, a domestic online tournament hosted by WSOP.com, and an in-person conclusion at the Rio in Las Vegas for ESPN to televise. World Series organizers tweaked that plan by keeping the two tournaments separate until each has crowned a winner, a practical way to avoid a final table with extreme chip imbalances between the international players and the U.S. players.

It’s still not perfect. It will still have an asterisk attached. It will still piss off poker purists and those without convenient legal access to either WSOP.com or GGPoker.

But as Phil Hellmuth said when we first suggested the hybrid model to him in July, “I think it could be great … NBA’s doing a bubble. Why can’t we?”

Is it possible to have a live WSOP tournament this year? Maybe an online event with a live final table? @phil_hellmuth says the NBA model could work for poker.

How main is your main event?

One person who isn’t exactly thrilled with the idea is Stoyan Madanzhiev, who won the $5,000 buy-in “main event” of the WSOP’s online-only series that was completed earlier this year.

Madanzhiev seems more playfully irked than genuinely angered, but some have suggested a three-handed final match including the Bulgarian would be a better way to crown a world champion. In fairness to the WSOP, though, the $5,000 main event of the “WSOP Online” series was never quite advertised as the equivalent to the tournament that traces its lineage from Johnny Moss to Hossein Ensan.

This hybrid event, with the traditional $10K buy-in, is.

“We are so excited to crown a ‘World Champion’ of Poker for the 51st Consecutive Year and it could be you,” reads the promotional email sent from WSOP.com to its players.

What sort of players will this event attract? There will be online satellites, of course, to beef up the field with players who can’t afford the five-figure entry. But for the most part, we’re looking at whales and pros — and possibly a steep drop from the 8,569 players who competed in 2019.

Then again, maybe not. In the U.S., the field might be modest, as only players located in Nevada or New Jersey on Dec. 13-14 will be able to play. Will mass quantities of players who live outside those states travel for a single, expensive tournament? It’s hard to say. Maybe there will be 3,000 entries in the WSOP.com event. Maybe there will only be 500.

The Detroit News interviewed the two 21st century champs from Michigan, and Joe Cada told them he’ll probably skip the tournament, while Ryan Riess said “it’s better than nothing.”

The international version appears a prohibitive favorite to garner more entries than its U.S. counterpart. The GGPoker tournament that Madanzhiev won in August tallied 5,802 entries. This one is twice as expensive … but arguably much more than twice as prestigious. And there will be a million dollars added to the prize pool for the heads-up match at the end (for which the players will begin with even stacks, regardless of the respective sizes of the fields they overcame to get there).

As poker pro Daniel Negreanu noted on his podcast on Friday, a significant imbalance in the field size could create a situation where the player crowned world champion earns less money than not only the player he or she defeats heads-up, but perhaps even the second-place finisher from the other bracket of the competition.

Shuffle up and deliver programming

This “better than nothing” version of the WSOP Main Event is a theoretical positive for the players who want a $10K tournament on the calendar, for the bean counters at Caesars, and for poker fans who would rather not see the championship lineage broken.

It’s also a positive for ESPN and its tradition of airing the Main Event.

The TV element is a major part of this plan. Viewers will get to see almost-live final tables (slightly delayed to protect the integrity of players’ exposed hole cards) accompanied by the familiar voices of Lon McEachern and Norman Chad during the relatively slow TV week between Christmas and New Year’s Day.

As with the soon-to-air new season of High Stakes Poker, there will be strict COVID testing to make the poker bubble as safe as possible and to enable players to compete without masks, plexiglass dividers, etc. In other words, it will look like the usual WSOP final table, minus the fans in the stands.

So, expect something that sounds more like the famous 2004 “Tournament of Champions.”

Of course, part of what made that tournament so memorable is that it was nothing but superstars — 10 hand-picked top players, most of whom had TV-friendly personalities. The World Series is facing the opposite challenge with this one. Every player who makes it to the televised portion of the tournament(s) will have gotten there by playing online.

Will any familiar names or faces make either the GGPoker or WSOP.com final tables? ESPN surely hopes so.

Well, there’s a plan in place that crowns a world champion and gives fans a small taste of televised tournament poker before 2020 ends. We agree with Ryan Riess: That’s better than nothing. A lot better.