North Carolina State offensive lineman was bumped up to No. 1 in The Athletic's mock draft 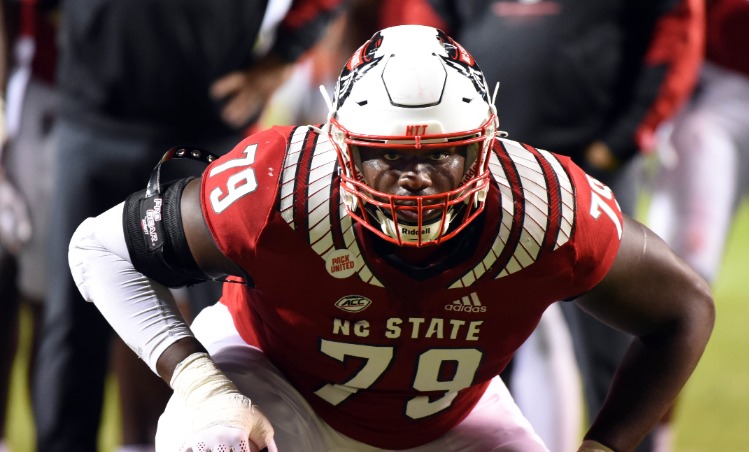 The NFL draft won’t take place until baseball season is a month in, tulips are in full bloom nationwide, and middle-aged men are once again donning their cargo shorts across the entirety of the continental United States.

But it was 100 days away when the sports betting market got its first shock to the system for this year’s draft, when Dane Brugler of The Athletic dropped his second mock draft. In it, he had North Carolina State offensive lineman Ikem Ekwonu – projected by others as a potential top 10 pick – as the No. 1 pick off the board, headed to the Jacksonville Jaguars.

The first round of the 2022 NFL Draft is expected to be even more unpredictable than usual.

Brugler, who noted in his write-up that he has “no clue how the Jaguars feel,” said his decision to place Ekwonu there was two-pronged: one, there is no consensus top pick this year, and two, scouts he spoke with prefer both Ekwonu and fellow offensive lineman Evan Neal of the University of Alabama over edge rushers Aiden Hutchinson of the University of Michigan and Kayvon Thibodeaux of the University of Oregon. Not only that, the scouts Brugler talked to all said they prefer Ekwonu to Neal.

Ergo, Ekwonu was escalated. And when Brugler’s paywalled mock draft dropped, Ekwonu was sitting at 100/1 to be the first pick at DraftKings, FanDuel, and PointsBet.

FanDuel quickly took Ekwonu off the board, but both PointsBet and DraftKings had the +10000 odds up for the better part of a quarter-hour. Then his odds started dropping, eventually settling for the day at +390 on FanDuel and +500 on the other two sites.

Currently, Ekwonu is +440 on FanDuel, +500 on DraftKings and PointsBet. FOX Bet has also gotten in on the action, posting Ekwonu at a market-best +600 to be selected first.

The first round of the 2022 NFL Draft is expected to be even more unpredictable than usual.

“It happens in this particular market,” said Johnny Avello, the director of the DraftKings sportsbook. “What it comes down to is not only handicapping the best players, but what do teams need? And then a guy puts out what he thinks the number one pick is, everyone jumps on it, we react and lower the odds quite significantly.”

And the odds keep moving.

“It’s funny how these things work. Like, we have a power rating for a football game, we put up our power rating, and we’re comfortable with a number. It may move a point, but we’re comfortable,” Avello said. “But with this, we rely on what we think the draft is, and the news. And the news moves this stuff around. A few days ago, Thibodeaux was -110 and Hutchinson was +110. Now Thibodeaux is +135, Hutchinson is +160 because Neal has been a number one pick in some mock drafts, and Ekwonu is now a number one pick. Those four guys are the four who people think might be the number one pick.”

Already discord at No. 1

To give some example of how volatile the NFL draft market is, at the time of this writing Hutchinson is the favorite at FanDuel at +160. But he’s +150 at PointsBet and +135 at DraftKings, while Thibodeaux is the runaway favorite at FOX Bet at +100.

“There’s already been big swings, and I expect more big swings as we go on,” Avello said. “I also expect this draft to be our biggest betting draft ever. I think we’ll get a ton of action.”

Avello said DraftKings posted the No. 1 odds market earlier than it ever had, and it hopes to get the other markets up and running in the near term. And for longtime bettors of the NFL Draft, it’s a well-known fact that eagle-eyed watchers will take advantage of news breaks and arbitrage opportunities right up until Roger Goodell takes the mic and says, “And with the number one pick …”

Last year, the biggest swings took place with the No. 3 pick, which the San Francisco 49ers acquired via trade. At various times during the process, Mac Jones, Justin Fields, and eventual pick Trey Lance were all the heavy favorite to be grabbed by the Niners.

Life comes at you fast in the NFL draft markets. Buckle up.