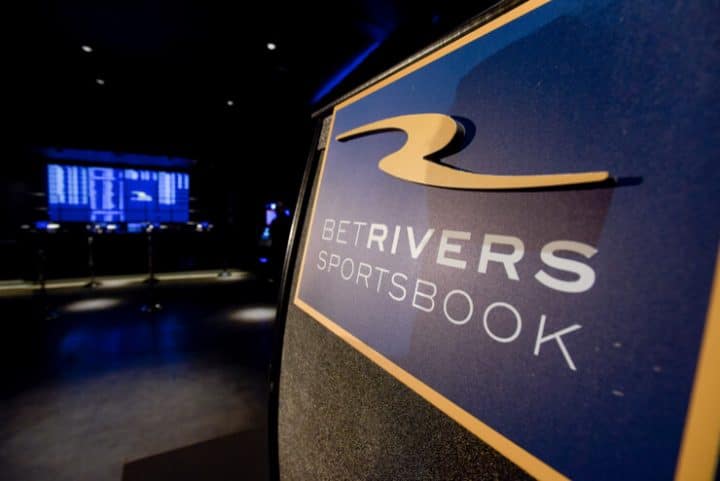 Sports betting became legal in the Land of Lincoln last June when Governor J.B. Pritzker signed a massive capital improvement bill containing gaming expansion into law. The momentum to launch picked up pace in December when the Illinois Gaming Board unveiled the sports betting license applications and its first rules package, and then released a second package of rules in January.

“I’m an optimist. I believe sports betting will be very successful and the Rivers brand will continue to do well,” Rush Street Gaming owner and Chairman Neil Bluhm said at the unveiling of the BetRivers Sportsbook area, which is nearly 5,000 square feet and was designed by DMAC Architecture. “We have a great staff and a lot of loyal customers. They know Rivers stands for quality and integrity.

“People like to bet on sports and they’ll always do so. Now they can do it legally and it will be highly regulated, which we’re totally in favor of, and create a lot of jobs and revenue for the state.”

Rivers Casino, which is one of five Illinois casinos currently with a temporary operating permit while waiting on the IGB’s rules to be codified by the Secretary of State, beat out the Argosy Casino in Alton to be the first to offer sports betting in Illinois. The Argosy tweeted Monday it would begin taking sports bets March 16, one day before the First Four of the “March Madness” college basketball tournament that is one of the marquee betting events on the U.S. calendar.

Should the final testing go as planned, the Argosy would become the second casino in Illinois to have a sportsbook provisionally accept wagers. Elgin Riverboat Resort, which runs the Grand Victoria Casino, and the Hollywood Casinos in Joliet and Aurora all have temporary operating permits while waiting on approval to accept bets. Two other groups have filed for a sports betting license: the Par-A-Dice Gaming Corporation, which operates out of Peoria, and Fairmount Race Track in Collinsville.

No mobile, but a “Betbuilder” offered in the interim

There is no current mobile betting available in Illinois, though Rush Street Gaming co-founder and CEO Greg Carlin noted in-person registration would be available starting Monday for when the BetRivers mobile app becomes available, which is expected to be during 2020. In the interim, Rivers Casino is offering a “Betbuilder” tool in which bettors can build their play on a mobile device to generate a QR code for wager entry at a ticket window.

Online operators DraftKings and FanDuel cannot enter the market for 18 months due to a “penalty box” provision unless they partner with an existing casino and operate under that casino’s brand, and Carlin sees advantages to Rush Street offering both retail and mobile.

“It’s important to the business itself,” he explained about mobile betting. “If you look at other states and you look at the data, like New Jersey, for example, 80% of the handle [actually, closer to 90% now] is coming through mobile devices and 20% is coming in retail.

“Retail is great because we’re adding one more product line to the casino, and the thing about our business is that we have a fixed cost. We have a certain number of team members who come to work every day and our electricity, and the more different things we can offer the customer, the better the experience, and the better it is for our business.”

To mobile or not to mobile

Opinions on how much the current lack of a mobile betting platform matters varied among the first people to place bets at BetRivers Sportsbook. It is the first Illinois-side challenge to the northwest Indiana sports betting market, which has received plenty of people crossing over from Illinois to place wagers at Ameristar Casino in East Chicago and Horseshoe Casino in Hammond.

“I’m very glad it came to Illinois,” said Paul Rogers, who lives in the northwest suburb of Wauconda and had been making the 60-mile drive into the Hoosier State. “It’s a long drive to Indiana, where I’ve been sports betting for the past six months. It cuts down an hour of time, and [BetRivers] is very close to where I work, so I’m very happy to see the sportsbook open.”

Rogers, who specified that where he works, in Rosemont, is less than two miles from Rivers Casino, expressed a preference to bet in person. He bet $100 for Gonzaga to cover against Saint Mary’s in the finals of the West Coast Conference tournament.

On the other side of the debate was Anthony Craven, a 26-year-old who was pleased with the in-person experience but lamented the lack of immediate availability of the mobile app since he has also been driving into Indiana.

“I was really disappointed in the bill when it said it would be years later after the retail launch,” Craven said. “If there was an app right now, I would still be here today, but I’d be much more likely to hop on the app, especially for the live betting.

“That’s something a lot of people at least my age have been more interested in, and you can’t really do that unless you’re in the sportsbook going to the kiosk live. So once the app comes out, it’ll be a game changer.”

Craven opted for a futures bet as his first wager, taking Auburn to win the SEC title in football at 14/1 since he felt there was more value than the daily lines being offered.

Though the state is nine months removed from Pritzker signing sports betting into law, there were still some nervous moments for Bob Rita and Mike Zalewski, who were the two primary Illinois state representatives to shepherd the bill through the state’s General Assembly.

“It was a roller coaster, ups and downs, but it’s an exciting day, to see this happen,” Rita said. “It was an unbelievable process. It was all over the place, and to bring all the different interests together so that we can finally put something up there that can pass, it was a lot of ups and downs.”

“At various times in the spring, I wasn’t sure it was going to get done,” Zalewski noted. “But it is done. It’s a good day for Illinois. It was hard, but we had momentum on our back, we had a gaming bill for a very long time. I think the pent-up emotion of trying to get a big comprehensive bill done is what helped get this through.”