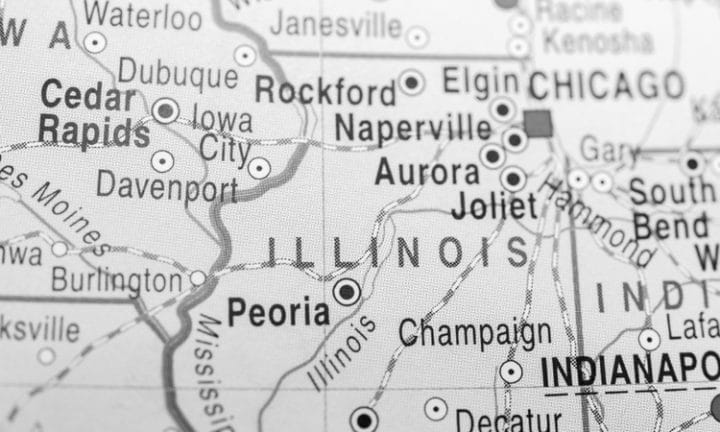 ELGIN, DES PLAINES, AURORA, and JOLIET, Ill. — Less than one week after Gov. J.B. Pritzker moved his state into Phase 4 of his Restore Illinois plan, which included limited indoor dining, it was the state’s 10 casinos’ turns to open their doors to the public on Wednesday.

The Illinois Gaming Board issued protocols for social distancing and cleaning requirements June 9, and the casinos also had the “benefit” of watching neighboring Indiana, which opened at 50% capacity June 15. With the Land of Lincoln essentially restarting sports betting from scratch — it was live less than one week before being shut down due to the COVID-19 pandemic — there is an opportunity for a new revenue stream, though it is uncertain if Pritzker’s executive order to suspend the in-person registration for mobile sports betting will help or hurt brick-and-mortar operations.

The following is a series of observations at various venues made over the course of the first day of action.

Hand wipes but no handshakes in Elgin

Grand Victoria Casino in Elgin is in the western suburbs of Chicago, and was one of the few casinos to open at 9 a.m. There was not much of a line to enter the gaming area, even when arriving approximately 10 minutes prior to open, and the first notable contrast — at least in relation to neighboring Indiana — was the absence of temperature checks as patrons entered the gaming area.

As seen in adventures across the Hoosier State, social distancing cues were visible throughout the lobby while waiting on line, and the Grand Victoria also used its screen signage to maximum effect pointing out face mask requirements and reminding patrons to use hand sanitizer. Multiple employees were present wiping down slot machines, with one telling a patron that chips for table games would be disinfected daily.

It was a quiet opening. Almost all the patrons gravitated to the slot machines, which were properly blocked off in alternating fashion across the banks of machines. One interesting touch was a solitary hand wipe placed on the chairs in front of the machines that were in use. The sportsbook that is currently under construction near the table area looks to be a way from completion — there were six ceiling mounts that could hold two screens apiece, and only one of the six had screens mounted.

Grand Victoria has a friendly feel, with multiple patrons interacting with employees who readily recognized each other despite wearing face masks. The casino also made the most of its gaming areas as any bank of slots that had an odd number of machines (e.g., three or five), had social distancing via interior units unavailable. So there would be two units available on a three-slot bank and three available in five.

Perhaps the early start time was a factor, but very few people were partaking in table games. Twenty minutes after the opening, there were four people playing. An hour later, that total had only increased to nine.

Plexiglass and face shields in vogue at Rivers

If Grand Victoria is the “mom and pop” casino of the Chicagoland area, then Rivers Des Plaines would be the “professional grade” casino. The biggest revenue generator in Illinois, it was also the first to market for live sports betting and the first for online sports betting via BetRivers, which launched approximately two weeks ago. The BetRivers Sportsbook was a fairly empty place, with only a few patrons watching English Premier League action on the video wall.

Rivers Des Plaines also had the benefit of watching Rush Street Interactive properties in other cities open, though the Pittsburgh casino had an employee test positive for COVID-19 shortly after reopening last month. Still, general manager Corey Wise sounded a note of optimism for Wednesday’s reopening via statement:

“We’re excited to welcome back guests and team members, and we’re doing everything possible to ensure their health and safety. We are looking forward to entertaining our guests once again and our Rivers Clean Team will be hard at work continuously disinfecting surfaces and equipment.”

The “Clean Team” was visible on the casino grounds, but more striking throughout the property was the extensive addition of plexiglass. Every bank of self-serve kiosks had partitions that went the height of the display screens, which was approximately six feet. There were also partitions at various places among the banks of slot machines, which allowed some banks of five to have four spots available with the middle idle.

But it is the plexiglass on the smaller table games that is a definite attention-grabber. In some ways, it has the look of a bank teller window, except that it is curved to accommodate the table’s contour. Those tables did not have as many patrons playing as those without, but with action picking up throughout the lunchtime hour, it seemed likely those tables would be populated in short order.

The face shields also did not seem to faze patrons all that much in terms of interaction with dealers. Rivers also had multiple drink servers walking the casino grounds, with again a split of masks and face shields near 50-50.

By mid-afternoon, downtown Aurora had some signs of life along West New York Avenue, where Hollywood Casino is located. There were no waiting lines, and the entrance staff was laid back while going through protocols and screening patrons.

The layout at Hollywood is very spaced out, which helped in terms of creating uniform social distancing for slot machines. Some of the older models were also bunched together in terms of spacing, so it was not surprising to see banks of five with three machines turned off or some in which only two of six were active.

For the more modern slots, it was the more customary half-on, half-off that has been common throughout casinos operating at 50% capacity regardless of state or venue. With a smaller area dedicated to table gaming at approximately 20 tables, one half was not in use, while the other area had half its tables in use.

The hope, according to one of the managers, was that business would pick up throughout the week and he would be able to call in reinforcements as needed as opposed to the opposite approach of potentially overstaffing and having dealers idle. One interesting tidbit was seeing all dealers and pit bosses sporting face shields in the table area.

It may not have the white-hot intensity of Duke versus North Carolina, but there are two casinos in the city of Joliet doing battle for business. Getting to Hollywood Joliet at approximately 5 p.m., there may have been a lull of sorts in terms of attendance, and there were few patrons taking part in table games.

This Hollywood did have a few distinctions. It was the only one of the five casinos visited to request I lower my mask to make my whole face visible before entering the physical casino area. It was also the only casino not to have a craps table running upon reopening. The expectation is it will be available at some point soon, but it was noticeable to not have any movement around either of the two tables.

Additionally, all of the table dealers were sporting both face shields and masks underneath the shields. There was a concerted effort to place hand sanitizers in high-visible areas throughout the gaming area, whether they be attached to redemption machines or at a place where it makes sense to utilize them before doing something with touch.

Harrah’s was the busier of the two casinos with plenty of bustle at both the tables and slots. It was a more laid-back approach as all the dealers wore masks, with no one visibly seen wearing face shields. While Harrah’s did have one section of five table games cordoned off, it was also the only casino that did not cut off an entire section.

Instead, they opted to alternate tables throughout the area. It was also the only casino that appeared to have its high-limit table games running, but there was no one sitting at the three tables being offered at that point.

One interesting point was a statement that cards would be “refreshed more often.” When inquiring what that meant to a pit boss, he explained the carnival games, which use more cards at a more frequent rate, would have those decks swapped out at more often intervals.

With the holiday weekend coming up, it is all but certain these five casinos — and the others across the state — will come close to reaching the maximum 50% capacity allowed by the IGB protocols. That means there will likely be lines at peak times, so gauging social media traffic may be a wise idea before heading out to play.

Lastly, some tips to remember: