The likelihood of a casino in downtown Chicago looks brighter since Illinois passed a state budget that revised tax rates for such a plan. 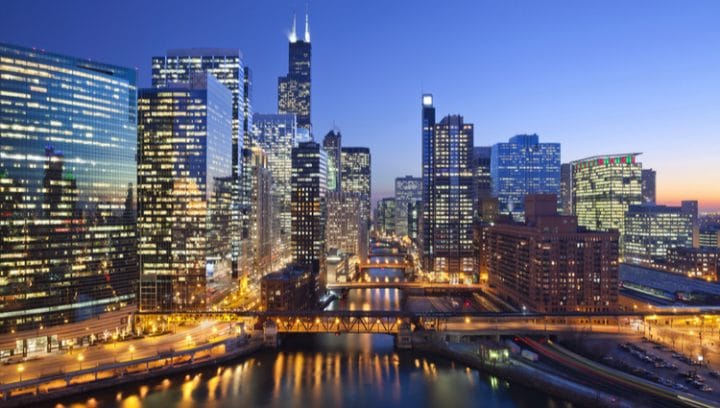 The possibility of a casino in downtown Chicago received a measurable boost in the early hours of Sunday morning when Illinois lawmakers approved a $40 billion budget for the fiscal year starting July 1.

The downtown area in the nation’s third-largest city was one of six locations approved for a casino when Governor J.B. Pritzker signed a gaming expansion bill into law last June that also legalized sports betting. The current closest casino to “The Loop” in Illinois is Rivers Casino in nearby Des Plaines, which opened the BetRivers sportsbook March 9 before being closed less than a week later due to the COVID-19 pandemic.

Indiana also has a pair of casinos — Horseshoe Hammond and Ameristar in East Chicago — located within one hour’s drive from Chicago. According to the Indiana Gaming Commission, Horseshoe had generated $89 million in adjusted gross revenue in slots and table games in the first two-plus months of 2020 before being shuttered due to the pandemic, while Ameristar reported slightly more than $45.4 million.

“After decades of attempts to build a Chicago casino, I’m proud that by working together this administration and General Assembly has secured its future and paved a path forward for hundreds of millions of dollars annually to repair our schools, hospitals, and higher education buildings across the entire state of Illinois,” Pritzker said in a statement following the passage of Senate Bill 516 by a 42-14 vote with three no votes in the Senate after getting approval by a 77-32 count in the House.

“I look forward to signing this legislation that provides a reliable funding stream to our historic $45 billion Rebuild Illinois capital program, and I thank the bipartisan members of the legislature as well as [Chicago] Mayor [Lori] Lightfoot for bringing this bill across the finish line. Together, we are creating jobs and rebuilding our state.”

BetRivers and the Argosy in Alton are currently the only two sportsbooks in Illinois to have been provisionally approved to accept wagers for sports betting. Another five have been granted temporary operating permits, while two of the state’s three horse racing tracks — Hawthorne and Fairmount Park — have applied for both casino and sports betting licenses as part of the expansion bill.

Arlington Park has opted to apply for only a sports betting license.

Mayor Lightfoot was able to get a significant change to the city tax structure for any casino that opens downtown. In the original gaming bill, there was a 33.3% privilege tax for the city of Chicago on adjusted gross revenues in addition to other casino taxes. As a point of comparison, Detroit’s three casinos pay a combined 19% in city and state taxes on slots and table games.

A study done by Union Gaming Analytics released by the Illinois Gaming Board last August said a potential casino downtown would “not be feasible due to the onerous tax and fee structure” and estimated an effective tax rate of 72% on the highest-earning potential of $800 million in AGR before factoring in the casino’s additional operating expenses.

The new tax rates are lower at both the state and city levels but move progressively higher based on the amount of AGR generated. The state of Illinois previously had a progressive tax rate from 15% to 50% from slots that increased every $25 million, and a tax of 15% on table games for the first $25 million and 20% on all money above that. Those are replaced with the tax rates for both Illinois and Chicago listed below:

“The idea is to make this work for Chicago so that we can fund our vertical capital [construction program], put people to work, not only for Chicago but for everywhere in the entire state of Illinois. This is good for everyone: for jobs and development, and for having a Chicago casino be real,” said Illinois State Representative Bob Rita, who was a driving force behind legalizing sports betting in Illinois, prior to the vote.

More time to pay, no movement on mobile sports betting

In an acknowledgement of the challenging economic conditions created by the pandemic, the bill lengthened the amount of time for casinos to make a reconciliation payment from two years with interest to six without. It also delayed payments on applications for gaming license fees to July 1, 2021.

Two areas that remained unchanged, though, were in-person registration for mobile sports betting and the 18-month “penalty box” provision for online-only applicants for sports betting licenses. Rush Street Interactive, which runs BetRivers, appears close to being the first in Illinois to have the ability to offer mobile betting after its partner GeoComply received a temporary operating permit as a supplier in late April.

The “penalty box” provision, which is referred to as a “regulatory waiting period” in the text of last year’s bill, was directed mainly at daily fantasy sports companies DraftKings and FanDuel following a 2015 opinion handed down by Illinois’ attorney general that both illegally operated DFS sites. Both, though, could be looking at ways to circumvent that waiting period — and the $20 million online-only license fee charged by the state.

DraftKings, through Crown IL Gaming LLC, has applied for a management services license according to the IGB’s official website, and FanDuel is reportedly in talks to partner with or purchase Fairmount Park. It is unknown who DraftKings would partner with as only three existing casinos in Illinois — Harrah’s Joliet, Jumer’s Rock Island, and Casino Queen — have yet to apply for a sports betting license.

But partnering is a significantly less expensive route for the two DFS giants since the sports betting license fee via casino is $10 million.