Betting On The NFL Preseason Doesn’t Make You A Degenerate 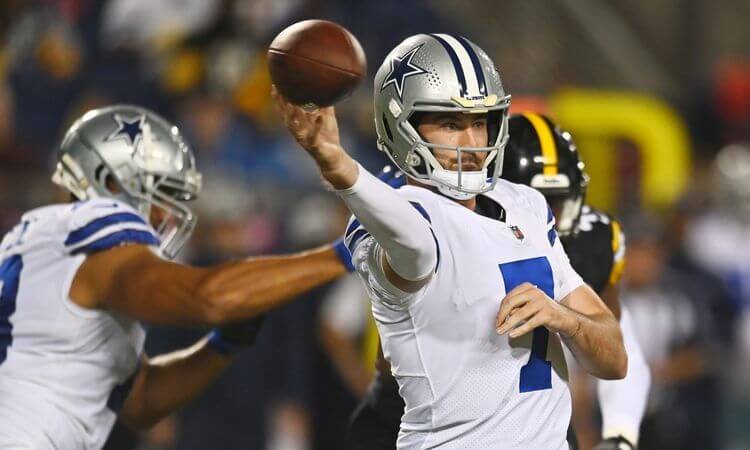 Next week’s NFL Hall of Fame Game signals the start of the NFL preseason, and sports bettors will eagerly place wagers on the game. In turn, people will inevitably tweet in disgust about how anyone betting on the NFL preseason is a degenerate gambler.

That blanket statement isn’t quite the case, just like those who bet on the NBA Summer League aren’t automatically problem gamblers. Betting on exhibitions does reveal a couple things about sports betting, though. First, there are betting edges out there, even for exhibition events. Secondly, sports fans will wager on just about anything.

“People bet on a lot of things,” DraftKings Content Specialist Julian Edlow said with a laugh. “I just go back to the pandemic when there were no sports and people were betting on ping pong and darts, whatever. These summer months can be slow.”

Indeed, if you’re tired of betting Major League Baseball games or PGA Tour events, the summer months can be boring for recreational bettors.

But while NBA teams aren’t throwing parades for Summer League championships, and NFL teams aren’t retiring the jerseys of players who starred in the preseason, that doesn’t make the exhibition-style events meaningless for fans and bettors. The summer months are a slower period for professional sports leagues in the U.S., and preseason action gives fans a chance to see future stars competing against other professionals. NBA Summer League isn’t quite the same as the regular season or playoffs, but former collegiate stars battling in their first professional games still attract attention.

“It’s cool because it’s right after the draft, and you don’t have to wait until October to see some of these guys play with an NBA uniform on,” Edlow said.

Summer League basketball is somehow 500x more fun than mid-February actual NBA. Not even sure that’s a thing that needs fixing, it’s just great for me right now.

On the NFL side, preseason games give fans a chance to see players battle for final roster spots, which can be enjoyable. Stars don’t usually play much, but roster squabbles and heralded rookies getting their first NFL reps make for quality entertainment. It also helps that a football-crazed nation hasn’t seen NFL action since February, and some fans will watch any NFL game, even if the stakes are minimal.

“Everyone loves the NFL, right?” PJ Walsh, director of subscription content at The Action Network, said. “Everyone wants to bet on the NFL.”

Other seemingly meaningless sporting events like The Match still generate fan and betting interest. While the made-for-TV golf showdowns might not have important stakes, viewers won’t complain about a chance to see the best professional golfers – and sometimes non-golfers – compete in an entertaining format during a slow sports day.

Sports offer entertainment, and the majority of bettors wager recreationally. Putting a few dollars down on an NBA Summer League matchup or NFL preseason game can make for a more riveting experience, even if the bettor didn’t necessarily research the matchup and may be essentially guessing at a possible outcome.

For professional bettors, there are edges to be had in preseason exhibitions. In the NFL, coaches are often open about their plans for preseason games. A coach may tell the media days before a preseason game that they plan to rest their starting quarterback and only play other starters for one series. The opposing coach may plan to let his starters play an entire half.

“That’s basically where the value can be found, is if you can determine or project which team is going to play their starters more based on news,” Walsh said.

Finding success using that strategy can be a challenge, however, as sportsbooks move their lines as information becomes available. According to Walsh, some bettors research tendencies of coaches well before preseason lines are up to understand how long a coach likes to keep key players in preseason games and if they value preseason results.

Some bettors might find a personnel edge in a matchup. For example, one team could plan on playing multiple starting-caliber quarterbacks to help determine the winner of a quarterback battle, while a team with a proven starter might only play younger, subpar quarterbacks battling for a practice squad role. That’s a type of situation when a professional bettor may feel confident enough to wager on a preseason contest.

“They’re not going to bet on the Hall of Fame Game just because they miss the NFL,” Walsh said.

Edlow says he often looks at first quarter or first half NFL preseason spreads, using news about player availability to find a potential edge. Like Walsh, Edlow believes roster management decisions can create the occasional “imbalance” in a game, giving one side an edge.

Casual fans might frown on bettors putting money down on games with seemingly meaningless outcomes, but for professional bettors, it doesn’t matter if an edge comes in Week 2 of the preseason or in the playoffs.

“Bets on preseason games or bets on Horizon League college basketball in the middle of the day pay just the same as Duke-UNC or Bills-Chiefs in the playoffs,” Walsh said.

Walsh noted lower-level games can have smaller betting limits at sportsbooks, and there are typically fewer edges in limited exhibition games compared to a full regular season of a sport, but that doesn’t mean there aren’t good opportunities to bet. Edlow shared that he limits his unit count for exhibition games and rarely went above a one-unit play during this year’s NBA Summer League, but both Edlow and Walsh agreed that just because a game doesn’t matter in the standings doesn’t mean the matchup is irrelevant to bettors.

“There are fewer edges, but if you can find one, there’s stuff worth betting,” Walsh said.