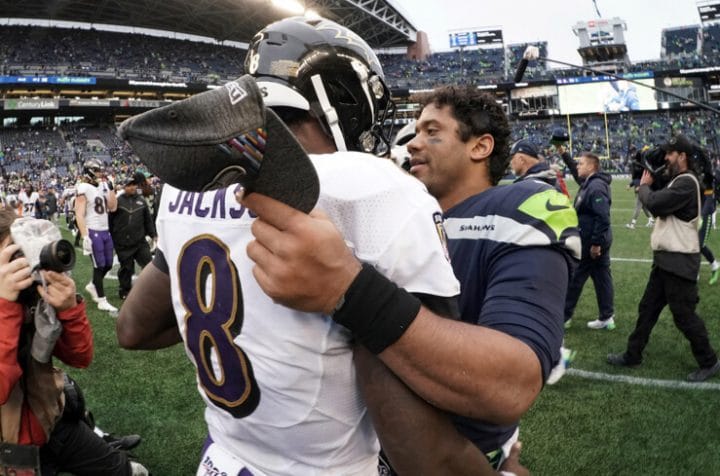 It’s close, though. The distance between Jackson and Russell Wilson is such that you’d need to bring out the chains to measure it.

The separation between the Ravens QB, the Seahawks QB, and the rest of the candidates, however, looks like prime Randy Moss getting free down the sideline.

The exact prices vary depending upon which sportsbook you’re looking at, but the message is the same everywhere: It’s Jackson, then Wilson, then … (long pause)… everybody else.

At FanDuel Sportsbook in Pennsylvania, as of Tuesday morning, Jackson is +140 for MVP (bet $100 to win $140) and Wilson is +150. At PointsBet in New Jersey, Jackson is +130 and Wilson has odds of +170. At DraftKings Sportsbook in Indiana, as of Monday (updated odds weren’t posted Tuesday morning), you could find more bettor-friendly prices of +170 for Jackson and +200 for Wilson.

That Super Bowl-winning veteran Wilson, a perennial MVP contender, is in the thick of this is no big surprise. But Jackson? He opened the season at 66/1 at DraftKings. At those long odds, he was the 18th-most-bet player to win the award before the season began. But his number has gradually come down, and in the past two weeks, bettors have been pounding the sophomore signal-caller; this past Sunday and Monday, 90% of all handle on the MVP market at DraftKings has been on Jackson.

Who else is in the mix?

The next shortest odds you’ll find on anyone at any sportsbook we checked is +900. Still, with six weeks to go in the regular season, there’s time for someone in the longshot field to make a push, especially if Jackson or Wilson falters or misses time.

Here’s a list of the other candidates with some semblance of an MVP shot, and their range of betting odds:

(Want a laugh? FanDuel and DraftKings are both offering odds on Steelers quarterback Mason Rudolph, at 250/1 and 500/1, respectively. If avoiding suspension for playing a key role in a fight for which everyone else got suspended was part of the MVP criteria, maybe those odds would make sense.)

Let’s focus first on the quarterbacks. Here’s a statistical breakdown:

Looks fairly close, right? By those measures, Wilson is best, and Mahomes likely would be if he hadn’t missed 2½ games due to injury (and he might end up leading the league in passing yards anyway).

But there are two key stats missing: rushing yards and rushing TDs. Jackson has 788 yards through 10 games, on pace for 1,261, which would smash Michael Vick’s record of 1,039 by a quarterback. And he has six touchdowns on the ground — not a record pace (Cam Newton scored 14 in 2011), but a differentiator from the field just the same. The next closest this season are Kyler Murray with 418 rushing yards and Watson with five rushing TDs. Wilson has 256 yards and three touchdowns with his legs.

Especially for a quarterback, team record matters when determining the MVP. The last time a non-QB won was 2012, when Adrian Peterson came up nine yards shy of the single-season rushing record and averaged an absurd 6.0 yards per carry. That was also the last time a player on a team that finished with fewer than 11 wins and did not win its division captured the MVP.

For recent QBs, 11-5 and at least a division title — if not the best record in the conference or the whole NFL — has been the bare minimum.

Jackson’s Ravens are 8-2, a virtual lock to win the AFC North, and probably headed toward a first-round bye. If he keeps producing and they finish 13-3 or better, the award is likely his.

Wilson’s Seahawks are also 8-2, but they trail San Francisco by one game in the NFC West. As magnificent as he’s been in willing an otherwise ordinary team to success, Wilson probably needs more than a wild-card berth to win the MVP — unless Jackson sputters down the stretch.

It’s surprising to see Watson’s odds as short as they are with the Texans at 6-4. Prescott’s Cowboys are also 6-4. Either QB needs to lead his team to a torrid finish to have a realistic chance at MVP.

Rodgers seems a better longshot bet, given that the Packers are 8-2 and there’s a certain comfort level in voting for a beloved all-time great like him. Particularly at +1600 at FanDuel, there might be value there.

What about Mahomes at +1700? It’s tough to win the award with only 13½ games of action, but if he can march the currently 7-4 Chiefs to a 12-4 finish while leading the league in passing yards and passing TDs, he’d have a chance.

The extreme betting longshots, Brady and Garoppolo, are both mildly intriguing because of their teams’ success. The iconic Patriots QB and his former understudy are guiding the league’s only two 9-1 teams. At odds of 80/1 and 50/1, respectively, you’re banking on a guy with good-but-not-great stats leading his team to a 15-1 record that bests anyone else in the NFL by at least two games. And even then, it’s difficult to see either one getting the votes. The 49ers’ defense will get more of the credit than Garoppolo, and Bill Belichick figures to get more praise than Brady if the Pats finish with just one loss.

Can a runner or receiver score?

Cook has been outstanding this year for Minnesota, but there’s nothing unprecedented about his numbers. McCaffrey, on the other hand, could break Chris Johnson’s record, set in 2009, for yards from scrimmage. The record is 2,509 yards; McCaffrey is on pace for 2,522. The problem is the Panthers are only 5-5, three games back of the Saints in the NFC South. A player on a non-playoff team isn’t winning MVP, even if he sets an all-time yardage record.

But speaking of those NFC South-leading Saints, wide receiver Thomas might actually be the most appealing of the non-QBs.

The team is 8-2 and has a shot at the best record in the NFL. Thomas leads the league in receiving yards with 1,141 (the runner-up has 993) and receptions with 94 (the next best is 75). Thomas is on pace for 150 catches and 1,826 yards. The records are 143 and 1,964. And the Saints have shuffled quarterbacks due to injury, making Thomas the obvious common denominator in their success, the glue that has held New Orleans together.

He’s 125/1 at PointsBet. If you don’t want to play it safe with Jackson or Wilson, Thomas is the most exciting Hail Mary play you can call.