"Jeopardy James" and the only player to beat him were both victorious in the Tournament of Champions semis, setting up his shot at revenge. 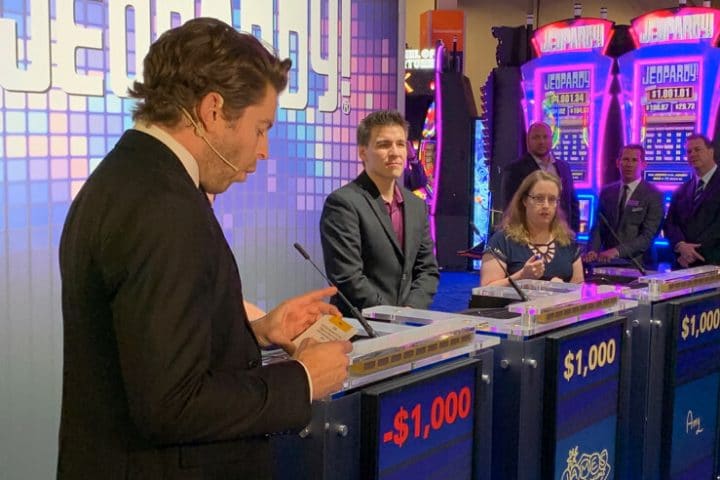 In terms of hype, marketing, and public excitement, you can’t go wrong scheduling a rematch to a major upset.

Fans spend months, maybe years, wondering: Was the first time a fluke? Was it a matter of styles? Or was the underdog really just better?

A rematch provides the opportunity for answers.

Sometimes we get that rematch: The Eli Manning Giants and the Tom Brady Patriots met in a second Super Bowl six years later, Muhammad Ali faced Leon Spinks again as the challenger seven months later, and, albeit with an entirely different group of players, Michigan got its revenge on Appalachian State seven years down the road.

Sometimes we don’t get the rematch: There was never a Buster Douglas-Mike Tyson II, Joe Namath only played one more playoff game after Super Bowl III and it wasn’t against the Colts, and it seems highly unlikely that we’ll see a Trump-Clinton II.

This Thursday and Friday, fans of the game show Jeopardy! will get the rematch they’ve been waiting for. James Holzhauer, the professional sports bettor from Las Vegas who rewrote the Jeopardy! record book over the course of a 32-game winning streak this spring, and Emma Boettcher, the Chicago librarian/giant-killer who shook up the world (and inspired idiotic conspiracy theories) in an episode that aired June 3, will again test their trivia knowledge and buzzer speed in the two-day finals of the 2019 Tournament of Champions.

As the Jeopardy! super-nerds surely know without us telling them, this is the first rematch in a Tournament of Champions final to a regular-season pairing since Vik Vaz vs. Bill MacDonald in 2006.

In that showdown, Vaz and MacDonald both lost to Michael Falk. And therein lies the complication in hyping Boettcher-Holzhauer II: There will be a third contestant on the stage. This is like if Douglas and Tyson signed to fight again, but as a triple-threat match with Evander Holyfield in the ring also.

Holzhauer got here with a pair of runaway wins, first in the quarterfinals last week and then in the semifinals on yesterday’s episode.

Host Alex Trebek had to apologize mid-show for introducing Holzhauer as “our champion” during the interview segment, when in fact, all of the contestants are champions but, until Friday’s game is complete, none of them are the champion of this two-week event. It was an understandable mistake. It’s hard to not to think of Holzhauer, the public face of sports betting in 2019, as the champ — even when the woman who dethroned him was victorious on that same stage immediately prior.

In any case, “Jeopardy James” played like a champion in the semifinals. He uncovered two of three Daily Doubles (including on the very first clue of the game) and nailed them both, and he buzzed in with only one incorrect answer as compared to 27 successful responses.

In a fun twist for the guest on the most downloaded episode of the Gamble On podcast, one of the categories in the opening round last night was “Fantasy Football.” But it wasn’t what you’d think. The clues were about NFL “what ifs,” such as what team would have won the Super Bowl if Scott Norwood’s kick hadn’t sailed wide right. Holzhauer buzzed in with the correct response on three of five clues, all of which were easy for any sports fan.

Entering Final Jeopardy, Holzhauer’s $30,466 put him out of his reach for both Steven Grade ($11,400) and Rachel Lindgren ($7,200). So it goes down as, well, trivial that Holzhauer got the answer wrong, breaking a streak of 28 straight correct Final Jeopardy answers.

In Monday’s game, Boettcher was leading but not a lock heading into the final clue, having gotten 21 answers right and two wrong without landing on any Daily Doubles, and she nailed the Final Jeopardy answer to advance.

The real star of that episode, however, was Trebek, who got uncharacteristically emotional in the wake of Dhruv Gaur’s Final Jeopardy entry:

Alex Trebek getting choked up at a heartfelt final jeopardy answer. The instant welling up of tears and emotion no viewer expected to have tonight. 🥺 what a moment. #weloveyoualex pic.twitter.com/DVcMGKl8wj

In her relatively limited Jeopardy! career, Boettcher is now 149-9 overall in terms of right and wrong answers, batting an outstanding .943. She’s also 7-for-7 on Daily Doubles, a key statistic relating to her upset of Holzhauer, as she uncovered both such clues in the Double Jeopardy round of their first meeting.

Despite his 0-1 record vs. Boettcher, he has to be viewed as a massive favorite entering the finals.

But we say that not even knowing who the third player will be. For what it’s worth TheJeopardyFan.com sees Francois Barcomb, an 11th-grade physics teacher from New Paltz, N.Y., as the no. 2 player in the tournament and, by a slight margin over Boettcher, the biggest threat to Holzhauer’s title aspirations. So whether or not Barcomb prevails in tonight’s semifinal game will influence the championship odds of both Holzhauer and Boettcher.

If we were running a sportsbook, how would we set the odds? For argument’s sake, let’s assume Barcomb wins tonight. If our goal is to balance the action and make sure the house has the edge, we’d go with something like this:

No matter what the result, we’re getting Boettcher-Holzhauer II. And that’s about all that a Jeopardy! superfan, or a casual who only tunes in when Jeopardy James is playing, could ask for.