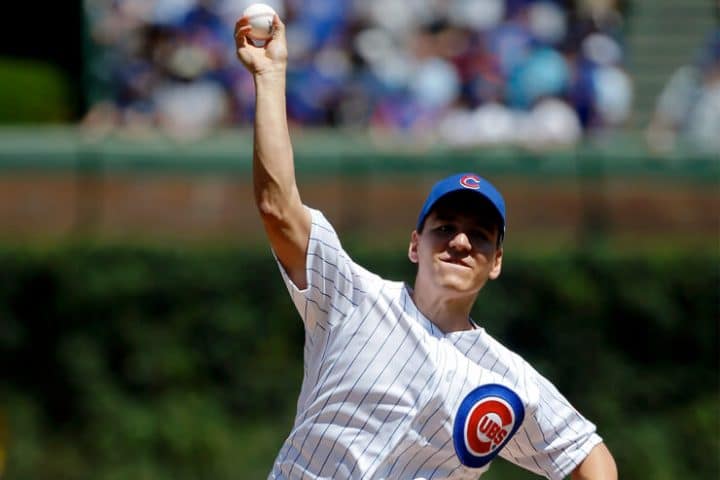 It might be akin to putting Muhammad Ali, Joe Louis, and Rocky Marciano in the ring together on national TV and letting them duke it out to determine the greatest heavyweight champion of all time.

That ‘s what Jeopardy! is doing on ABC Tuesday and successive nights when sports betting pro James Holzhauer (pictured above throwing out the first pitch at a Cubs game), who in 2019 reinvented the approach to the popular trivia game show, takes on past champions Ken Jennings and Brad Rutter.

In a rare multi-game format in prime time (8 p.m. ET), the trio will compete on Jeopardy! The Greatest of All Time on multiple nights with the winner receiving $1 mm and the losers $250,000 each.

It is a chance for unusually famous sports gambler Holzhauer to prove that his unique methods combined with uncanny abilities don’t just outclass a cross-section of America’s smart schlubs but two prior contestants with their own unparalleled success.

The three players and a small number of other Jeopardy! insiders already know the outcome, as the shows were actually taped in December.

That’s one reason you won’t find any legal wagering taking place on the competition in the U.S. Regulators frown upon betting action tied to events that have already been recorded, as it would be unfair for those with inside information to profit from it.

The same restriction doesn’t necessarily apply to offshore betting sites, and ESPN reported that the Jeopardy! wagers they allowed in November and December have led to controversy.

Both Pinnacle and BetOnline shut down action on the event last month after a curious number of wagers came in on the same contestant, according to ESPN, which did not identify the betting favorite. While there are unusually tight dollar limits on such events — including the Oscars — so no one in an advantageous position can walk away with thousands in profit, the offshore sportsbooks still did not like what they were seeing.

The contestants themselves joked about the secrecy, while giving nothing away, during a segment on ABC’s Good Morning America Monday.

Wearing purple ribbons in honor of game show host Alex Trebek’s battle with pancreatic cancer, they talked about the challenge not only of competing against two fearsome peers but of the tougher-than-normal questions thrown their way.

“I would say that they definitely stepped them up a notch for the competition,” Rutter said.

America’s sports bettors with an interest in the high-stakes trivia night competition are likely rooting for “Jeopardy James,” as Holzhauer was dubbed during a 32-game winning streak that aired last spring.

With a smiling, clean-cut demeanor and a whip-smart way of playing the game unlike virtually any predecessor, Holzhauer created a new image of the American gambler. And it was the type of gambling that paid off, too.

He established a single-day record of $131,127 and the rather unbelievable mark of holding the top 16 daily payouts in the history of Jeopardy!. His regular winnings, combined with a $250,000 prize for winning the Tournament of Champions in November, provided the Illinois native with more than $2.7 mm from the game show. In the tournament, he bested Emma Boettcher, the contestant who months earlier had ended his winning streak at 32.

A professional sports bettor in Las Vegas since 2008, Holzhauer drove up ratings for Jeopardy! with wins employing a go-for-broke strategy. He opted for high-dollar questions early, trying to build up a bankroll that could then be utilized to full effect when successfully finding Daily Double questions to answer.

And he was rarely wrong at anything, missing about one question per show, on average. The former math whiz in his youth basically spent his life acquiring the type of knowledge that has informed his Jeopardy! success, he told GMA.

“Every time you learn something new, you just file it away — might be useful one day,” Holzhauer explained.

Jennings and That Other Guy actually have won more

Holzhauer’s competitors are hardly slouches themselves, having in fact won more on Jeopardy! than he did from his wildly successful run. They’re just known to be a little more traditional in playing style, and it will be interesting to see if they adopt any of Holzhauer’s techniques in order to offset him.

The better-known is Ken Jennings, who holds a record from 2004 of 74 straight wins. His total winnings of regular play combined with tournaments amounts to nearly $3.4 mm.

And then there’s Brad Rutter, who’s only the highest-earning American game show contestant of all time with almost $4.7 mm won, yet has never come close to being a household name. That’s because his initial success in 2000 came when champions were limited to appearances on five games, so most of his Jeopardy! money was won in special tournaments.

Holzhauer jokingly referred to Rutter as “That Other Guy” on his Twitter account when asking followers to predict who will win.

The trio are all so knowledgeable, of course, that the competition could come down to a question like in the Old West of who’s the fastest draw – only with a buzzer, in this case, instead of a pistol.

Due to the importance associated with proclaiming a GOAT, the winner is to be determined differently from in other Jeopardy! competition.

The trio will be shown three consecutive nights playing two games on each night. The total winnings in the two games determines who wins that night’s match. The first player to win three nightly matches is then declared greatest.

It means the competition could carry over to prime-time telecasts next week as well. Whether that’s the case, the contestants, Trebek, the Jeopardy! producers, and ABC aren’t saying.

That’s why you may want to tune in — unless you’re the person who bet all that money offshore and already knows the answer.

Gary is a longtime journalist, having spent three decades covering gambling, state government, and other issues for the Pittsburgh Post-Gazette, in addition to stints as managing editor of the Bedford (Pa.) Gazette and as a reporter for United Press International and the Middletown (Conn.) Press. Contact Gary at [email protected].