Big race aside, IndyCar’s getting lapped by F1, NASCAR at sportsbooks 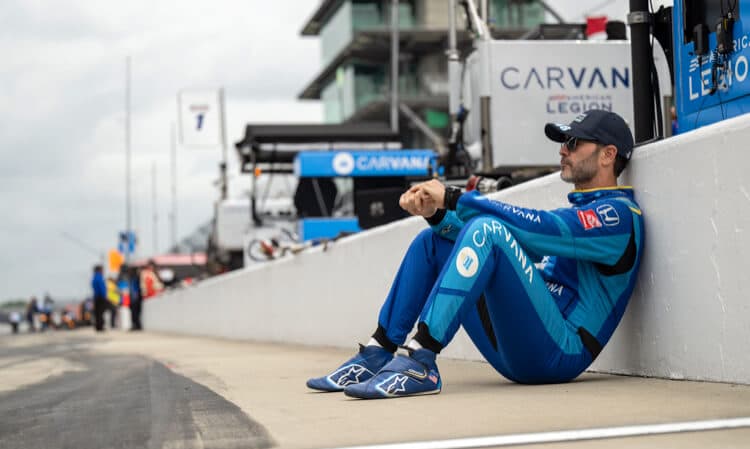 Scott Dixon (4/1 at Caesars) and Alex Palou (+450) are the favorites to win this Sunday’s Indy 500, but all eyes — and plenty of wagers — will be on a 46-year-old former NASCAR star who will be making his IndyCar debut at Indianapolis Motor Speedway.

That’d be Jimmie Johnson, who’s been bet down to 16/1 after opening at 30/1 at Caesars, which just became the official sports betting partner of the Indy 500 and the speedway, where the gaming giant has opened a lounge with televisions, refreshments, and even cornhole. Attendees can hang out there and wager on races through mobile sportsbooks.

“Definitely the focus will be on [Johnson],” said Adam Pullen, Caesars’ assistant director of trading. “It’s his first time here. How do we gauge how he’s really gonna do? His practice times look decent, and knowing you’re gonna get some bets on him, I think it’s a fair price. He’s not your average rookie who’s racing here.”

“He only did the road courses and didn’t do so well,” said Pullen.

However, Pullen added that Johnson, who was leading the way in mid-week wagering with 8% of all tickets, has been “showing some good speed” during practices for the race. He’s favored to win his head-to-head matchup (-220/+170) with two-time Indy 500 champ Juan Pablo Montoya (100/1 to win the race), whose “car doesn’t look too solid,” according to Pullen.

“This year, it seems like his car is not as tuned in as it was last year, but things can change on race day,” Pullen said. “He knows how to win at the track, obviously, and has had a ton of success here. It wouldn’t be a surprise to see him in the winner’s circle, but the odds are based on what they’re doing now, how they’re looking in practice. He’s a popular driver. Even the layperson knows his history. The name resonates a lot with casual bettors.”

Looking at some longer shots who could kiss the bricks, Pullen mentions oval expert Ed Carpenter (22/1), Conor Daly (50/1), and J.R. Hildebrand (75/1) as potential upset specialists in a race where “anything can happen.”

Speaking of casual bettors, the IndyCar circuit could use a lot more of them if it hopes to catch up to NASCAR or even Formula 1 in terms of betting handle. For most sports fans, the IndyCar circuit begins and ends with the Indy 500, a race for which Pullen expects to book “over six figures” in bets. For any other IndyCar race, Pullen said, Caesars maybe books “mid-four figures.”

“Before sports betting expanded all over the country, we were lucky to write a few thousand dollars on an IndyCar race,” he said. “Formula 1 was a little more than that, but the gulf between F1 racing, how it used to be and now, it’s grown maybe four times as much as we handled three to five years ago. IndyCar just hasn’t, for whatever reason, had that growth like Formula 1 has. As for why that is, I don’t know. Maybe F1 being on ESPN has helped in recent years. Indy’s always been a distant third.”

Caesars has an opportunity to directly improve IndyCar’s popularity among bettors with its Caesars Sportsbook Lounge at Pagoda Plaza, which opened for the GMR Grand Prix at Indianapolis Motor Speedway on May 14. To this end, Caesars is offering $106 in free bets — in honor of the Indy 500’s 106th running — and entry into the lounge to anyone who signs up for its sportsbook app and makes a first-time deposit of $20.

Some 450,000 fans are expected to take in the Indy 500 festivities this weekend, which a Caesars spokesperson said “should be big for the lounge.”