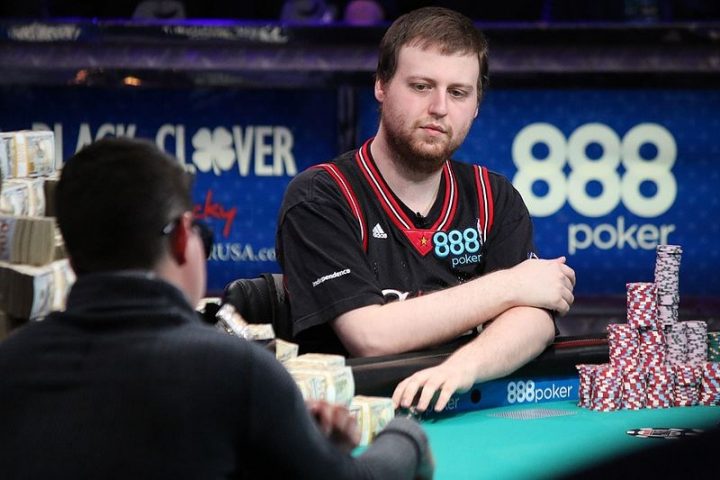 Joe McKeehen outlasting 6,419 other poker players to win the 2015 World Series of Poker Main Event was no fluke. With his third-place finish this month in the WSOP’s $1,500 Millionaire Maker — a tournament that attracted even more entrants than the tourney in which he rose to fame three years ago — McKeehen achieved a new level of confirmation of a very specific form of greatness. The 26-year-old from the Philadelphia suburbs just might be the very best in the world at navigating through seas of tables in the biggest fields live poker has to offer and being there with a chance to win when only one table remains.

McKeehen has racked up nearly $15.5 million in live tournament winnings and two WSOP bracelets, plus he’s made three World Poker Tour final tables. And when he won the World Series Main Event in ’15, he put on the most dominant final table display since Greg Raymer more than a decade earlier, leading wire to wire. With 145 career cashes already outside the Main Event, there’s plenty of numerical evidence to suggest that McKeehen is the best world champion of the modern era.

The problem with poker superlatives

“To say anyone in poker is the best at something is probably a stretch,” counters poker pro Chance Kornuth, the founder of Chip Leader Coaching, where McKeehen is one of his fellow instructors. “The edges between the most elite players are too negligible to say anyone is the best.

“But Joe is definitely in the highest tier.”

Kornuth makes a good point. There are too many variants of poker, too many forms of play, too many untrackable cash games and instances of Lady Luck intervening to definitively declare anyone the best. Even when Phil Ivey was at his peak and most experts labeled him the best poker player alive, it was a take that was nearly impossible to quantify.

That said, there are some rather convincing stats in McKeehen’s favor:

His record is just so ridiculous…

When McKeehen was in preschool, his parents, Brent and Gina, knew his intellect was something special, so they had him tested. The results suggested they should enroll him in private school, because the local public schools weren’t likely to sufficiently challenge him. It was a body blow to the bank account for the working-class McKeehens, but they did what was best for their son.

McKeehen loved games from an early age — in 2010, as a teenager, he won what was considered the “world championship” of the board game Risk.

Around the same time, he found poker. At 20, he took down a PokerStars Caribbean Adventure tournament for $116,230. Two days after his 23rd birthday, he finished second in a 7,862-player WSOP Monster Stack event, earning $820,863 and creating a comfortable cushion in a bankroll that would explode with a $7,683,346 score in the Main Event the next summer.

Large and in charge

McKeehen is one of only two Main Event winners in the post-Chris-Moneymaker era — the other is 2010 champ Jonathan Duhamel — with career earnings outside that one tournament that exceed the payday for that singular win. What is it that sets McKeehen apart in these massive fields?

“He doesn’t get out of line very much,” says Kornuth. “He doesn’t make big mistakes. Joe is one of the hardest people in the game to get chips from. He has a low-variance grind at every level, through every stage of the tournament. He knows where he’s at. He knows how to play bubbles with all the different stacks. He’s just super comfortable in every aspect of the game.”

Though you’d never guess it from his often volatile Twitter personality, McKeehen is almost un-tiltable at the table. If he takes a bad beat, sure, he’s prone to venting, but he doesn’t let it affect the next decision he makes. McKeehen has a sense of calm and a mental endurance that propel him in these tournaments that drag across several days of play.

There was a time when Phil Hellmuth was in the conversation for world’s best large-field tournament player, and the rap on “The Poker Brat” was that his success stemmed from a unique gift for outplaying amateurs. The bigger the field, the softer the field, typically. And while Hellmuth had a reputation for struggling against his fellow pros, nobody was better at siphoning chips from those less experienced players who were just dying to make a chip-dumping misstep.

McKeehen, however, doesn’t seem to have built his success on those same tendencies. Since his WSOP Main Event win, McKeehen has final tabled no fewer than eight pro-heavy tournaments with buy-ins of $25,000 or more.

All indications are that McKeehen is a great tournament player, period, regardless of field size. But he does hold certain edges over certain types of players more commonly found when there are thousands of entrants.

“I think his success is partially due to the fear factor,” observes Kornuth. “Your pre-flop steals have more EV [expected value] and you have a higher ROI [return on investment] on every bet if your opponents are folding to you more often. He’s well known, he has a very intimidating stare, and he has this intrusive nature in the way he plays a hand that I think deters people from playing hands against him. The fear factor lowers his variance and increases how far he goes on average.”

In fields in which you need to be in the top one-tenth of a percent to reach the final table, going the distance is no easy task. But McKeehen does it with such regularity that it can’t be chalked up to flukiness or “run good.”

Maybe it’s a fool’s errand to declare with any authority who the best large-field poker player out there is. But it would be just plain foolish at this point to leave McKeehen out of the conversation.

The Race Is On: Which US State Will Be Next To Legalize Sports Betting?