Jon Rahm was forced out due to a positive COVID test, yet many sportsbooks graded Rahm bets as winners 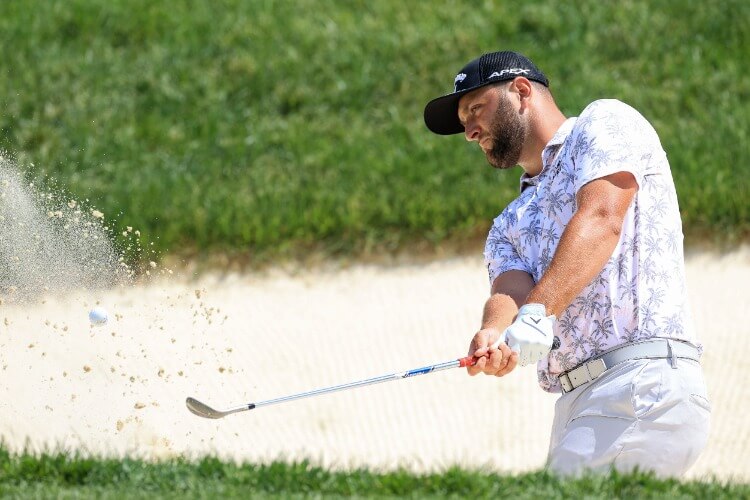 Knowing what we know about COVID-19, it would’ve been a lot better if the PGA just sent Jon Rahm out by himself to play in round four of the Memorial Tournament on Sunday.

Not to diminish the disease — believe me, I’m Chicken Little in Charge when it comes to the coronavirus — but really: He was asymptomatic, and golf is a game that can obviously be played socially distant. Just give him a vaccinated caddy, wait until everyone is off the course, and let the man finish out what almost certainly would’ve been a victory, as he had a six-shot lead before he had to withdraw post-round three.

Seriously: What’s the worst that could’ve happened if Rahm got to play the round?

Of course, Rahm was booted, Patrick Cantlay won in a playoff against Collin Morikawa, and Gambling Twitter was abuzz with decisions made by America’s sportsbooks.

It began when Darren Rovell of The Action Network tweeted out that DraftKings, FanDuel, PointsBet, BetMGM, and William Hill were paying out Rahm bets as winners.

Rovell also pointed out Superbook in Las Vegas was calling Rahm a loser.

Sportsbooks that are grading Jon Rahm’s withdrawal as a losing bet: Superbook in Vegas.

It might’ve ended there, if not for Matthew Metcalf, the sportsbook director at Circa — which is often lauded by the pro set as one of the (if not the) premier sportsbooks when it comes to customer service — tweeting a response to Rovell.

This set off a discussion — that was picked up by mainstream golf media — about Rahm bettors and how sportsbooks should’ve handled the situation.

Should Rahm bettors be paid out as if he won? Should the bets be voided? Should they be losers?

Short answer? Yes to all the above, though the slope can get slippery quick on the “paying out losers” side.

Bad beats, all the time

I know the job of a columnist is to come firing in with Strong Taek™, but in this case, there really is no “correct” answer, though it is instructive in demonstrating how different the two flavors of U.S. sports betting are. It’s just another case of the Vegas model vs. the European model.

The decision by most of the major sportsbooks to pay out Rahm winners is a simple one. They’re in a constant fight for customer acquisition, and once the first domino fell, the others followed. (Also, let’s be real: While there’s no way to know how much the books paid out, it’s fair to think the answer is “not a ton.”)

And it’s not like this is the first time sportsbooks have either graded losses as wins or voided bets that went south. PointsBet even has its “Karma Kommittee,” which exists to refund bettors on assorted bad beats.

If you bet Purdue, there’s not much to say after that ending.

Not the same as a win, but the least we can do – refunding Purdue ML + Spread in Free Bets IN FULL! It’s only right.

Of course, it’s not just PointsBet. Almost all of the books, at one time or another, have refunded players due to all manner of weirdness. This is across both traditional sports betting and DFS contests.

And quite frankly, it feels just. PointsBet may legitimately take things a bit too far with the Karma Kommittee, but at least the sportsbooks recognize the torture of watching winning green turn to losing red due to unforseen circumstances.

But I’ll tell you this much: It’s probably creating a situation where bettors are expecting to get paid out every time things get fubar’d. I know I’ve emailed customer service at times due to what I considered to be bad beats.

Circa? Not so much.

“We simply don’t pay out on losing bets,” Jeff Benson, Circa’s sportsbook operations manager, told me in an emailed statement. “If getting paid on bad beats is more important to you than getting some of the best golf odds in the country, we truly respect players’ choices to play elsewhere and hope all bettors come around on that someday.”

Benson pointed out that Circa was honoring Jon Rahm tickets that had him as a loser, so if you bet him to not win the tournament, you got paid out.

Metcalf, in a tweet that Benson referred me to, went a little deeper into the philosophy behind Circa’s decision.

“Through the years, I’ve shied away from any payouts that involve subjectivity,” Metcalf wrote. “It never leads to a good place long term from a customer perspective. That said I am happy for the people who received payment and can understand the perspective of those companies choosing to do so.”

For Metcalf, the facts of this case are clear enough: Rahm didn’t win the tournament, hence Circa won’t pay out as if he did.

And it’s also a very reasonable stance to pay out the Rahm bettors.

Well, except where’s the line? After all, plenty of bettors were very unhappy Saturday for a different reason: James Harden and his hamstring.

You guys are ridiculous….you void John rahm for golf for a “bad beat” but James harden playing a total of 42 seconds isn’t a bad beat?! VOID THIS SHIT WTF @FDSportsbook pic.twitter.com/wIi6N745fL

But while plenty of bettors were clamoring for their money back, there were zero tweets out there demanding the sportsbooks also void over props on Mike James, who ended up with 12 points and seven rebounds in relief of Harden. Additionally, exactly zero people who bet the under on Harden props were willingly giving back their winnings. Oh, and Kevin Durant finished with 29 points, which topped the consensus 28.5 over. Did Harden leaving the game help goose Durant to the over? Almost certainly. Did Durant over bettors demand their winnings be taken out of their account? Haha.

One thing is very clear

Circa and Superbook operate on the classic Vegas model, of high limits and welcoming sharp players and oftentimes offering slightly better odds.

The new-look online sportsbooks go the other way, with lower limits and a penchant for showing successful bettors the door. And they often offer lousier odds, especially in the less-liquid markets.

So when trying to piece together the Rahm situation, and paying out “bad beats” in general, Circa did the right thing, but so did DraftKings. Superbook did the right thing, but so did FanDuel. This is a Coke and Pepsi, Android and Apple situation. Everyone’s product is the same, except for the fact they’re different. No easy answer how to handle this. Circa is relying on its reputation as a player’s book, and the other books are relying on their reputations as … well, as players’ books. It really does depend on what you, as the player, value more.

Now that I’ve put pen to paper, I suppose I lean slightly, like 50.5/49.5, on the “don’t pay out” side. It’s cleaner. Bad beats happen to the house as well, and again, no one is giving back their winnings. Probably best to take the subjectivity out of what is, objectively speaking, an objective situation. There’s winners and losers, period, the end.

I’ll tell you though, I do have a very strong opinion on one item in this whole sordid tale: If Rahm had gotten vaccinated on or around March 24, when all adults in his home state of Arizona were deemed eligible, none of this would’ve happened. And while we don’t know Rahm’s official vaccination status, according to PGA protocols, Rahm was only being tested because he was in close contact with a positive case last week. Vaccinated players would not have been tested. So there’s the answer there.

Maybe if America’s sportsbooks really want to be demonstrate their “player’s book” bona fides, they should offer free bets with proof of vaccination. Column for another day.