Goodell's league and the legal gambling industry both look like winners after the perfect low-profile player got caught betting on NFL games. 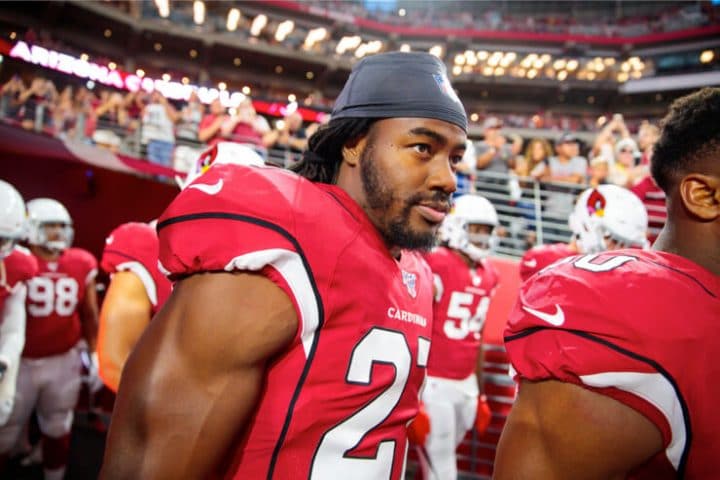 The NFL announced on Friday that Josh Shaw, an Arizona Cardinals cornerback who has not played a single down this regular season due to a shoulder injury, is suspended through at least the 2020 season for betting on NFL games.

It’s a landmark decision, in that it’s the first such suspension doled out by a major American sports league since the Supreme Court deemed PASPA unconstitutional and opened the door for widespread legal sports betting. Shaw is in fact the first NFL player to be suspended for betting on league games since Colts quarterback Art Schlichter in 1983.

“The continued success of the NFL depends directly on each of us doing everything necessary to safeguard the integrity of the game and the reputations of all who participate in the league,” read the statement issued by NFL Commissioner Roger Goodell. “At the core of this responsibility is the longstanding principle that betting on NFL games, or on any element of a game, puts at risk the integrity of the game, damages public confidence in the NFL, and is forbidden under all circumstances. If you work in the NFL in any capacity, you may not bet on NFL football.”

On paper, a league having to suspend a player for behavior that “puts at risk the integrity of the game” could be a black mark on all involved. But in this instance, it’s actually a perfect storm for the NFL and for the legal sports gambling industry to claim victory — at Shaw’s expense.

It’s only cheating if you get caught

That this is a win for regulated betting was spelled out perfectly by bettor and respected industry analyst Captain Jack Andrews:

Let’s focus on how the NFL would have been oblivious to this if not for the sportsbook reporting the suspicious behavior.

This isn’t a problem resulting from the proliferation of legalized sportsbetting. It is the solution to a problem that the leagues have ignored for decades.

Implied in that tweet is that we’ll never know how many NFL players — not to mention NBA, MLB, and NHL players, golfers, boxers, tennis players, etc. — have placed bets through illicit means over the years without the people running their sport having a clue.

As the NFL Network’s Ian Rapoport reported, sources close to Shaw said he placed his NFL bets at a casino in Las Vegas and used his player card and ID. Rapoport also noted that it is the first time Shaw ever placed a sports bet. That he created such an obvious digital trail supports his alleged claim that he misinterpreted the NFL’s policy on wagering and didn’t think he was doing anything wrong.

But it illustrates perfectly how the system works in a legal, regulated environment.

An NFL player bets on NFL games at a casino or a regulated U.S.-based online site, and his identity is known and the sportsbook can detect and report the activity.

An NFL player bets on NFL games with a bookie or at an offshore site, and he’s almost certainly getting away with it.

In addition to this affair making a strong case for the legal gambling industry, the NFL gets to share in the victory by laying down the law on someone while noting confidently that an investigation revealed no evidence that any games were compromised.

Shaw is the easiest scapegoat imaginable. In 2019, since he’s been an irrelevant player on a nearly irrelevant team — the Cardinals are 3-8-1 and in last place in the NFC West. Shaw’s season ended before it started, and as ESPN reported, he “has not been around the Cardinals much this season.” He does have a somewhat checkered history, getting suspended during his college career at USC for fabricating a story about how he suffered an injury.

You couldn’t have scripted a more perfect patsy for the NFL to make an example of.

There’s no question Shaw violated league policy. But it’s possible that it was just the dumb, innocent mistake he’s painting it to be, and he’s reportedly been extremely cooperative with the league. Is a suspension until at least Feb. 15, 2021 (pending appeal, if Shaw chooses to go that route) too stiff?

After all, this is a league in which domestic violence gets you a two-game suspension, at least until a video of the incident comes out.

Is betting on NFL games in Vegas during a season in which you haven’t been on the field 10 times worse than hitting your fiancee?

Or is this mostly just a statement about how the punishment for a star running back is different than the punishment for a relatively anonymous defensive player? That’s really the key question here. Would the NFL have the same zero-tolerance policy on betting on NFL games if it turned out that Aaron Rodgers wagered a few bucks on last year’s Super Bowl?

In Shaw, the league was gifted an expendable player with whom it could make a statement to every other player and coach while letting the media and fans know the NFL takes the integrity of the game seriously.

It’s no coincidence that the first player to get caught and publicly outed betting on NFL games in 36 years made his wager at a legal sportsbook. Had Shaw placed his bet offshore, it’s likely he wouldn’t be in the news today.  It’s hard to know whether it’s a coincidence that the player in question is someone the league has no motivation to protect.