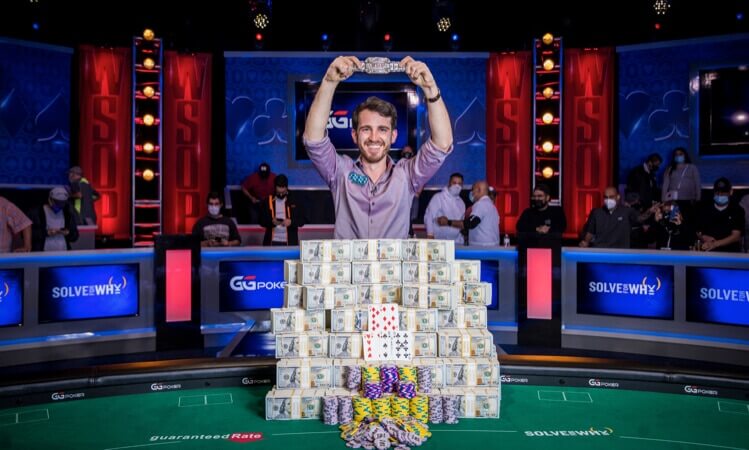 With 6,648 players eliminated, the 2021 World Series of Poker Main Event came down to a 31-year-old poker pro from Germany with more than $12 million in prior tournament winnings who’d held the chip lead throughout most of the late stages of the tournament versus a 49-year-old amateur from Atlanta with one previous tournament cash to his name who was down to one big blind earlier in the competition.

Had George Holmes, the recreational player making a Cinderella run, prevailed, it would have been the kind of poker story that breaks through to the mainstream and inspires countless home-game players to start scouting out flights to Vegas for the next WSOP.

But it wasn’t to be. Holmes overplayed his hand in the most literal sense possible and opened the door for Koray Aldemir to win his first bracelet, claim the $8 million first prize, and push his career earnings past $20 million.

With stacks nearly even and both players nearly 100 big blinds deep, play on Wednesday night at the Rio Las Vegas could have gone on much longer than it did, but a series of missteps by Holmes and a tough but correct call by Aldemir ended it.

Holding 10-7 of diamonds, Aldemir loved the 10-7-2 flop and check-raised Holmes’ K-Q. Holmes made a loose call with no pair, and then had the misfortune of picking up a real hand when the turn brought a king. Aldemir bet, and Holmes made an almost automatic call. When the river delivered an offsuit nine, Aldemir checked and Holmes got greedy with his pair of kings, betting all-in for slightly more than the size of the pot. Aldemir spent nearly three minutes deliberating before calling and clinching the title with two pair.

“He was really, really tough,” Aldemir said afterward of Holmes. “I didn’t expect that at first, but he played great. He put us in spots, not only against me, but against the other players. He made good bluffs, made good folds. As you could tell, it was really tough. I had the chip lead to start with and he grinded me down. Then I had to fight really hard to beat him.”

A different kind of ‘November Nine’

The final table played out Tuesday and Wednesday, airing nearly live (on slight delay to protect the identity of the players’ hole cards) on the PokerGO streaming service. A 15-hour edited version of the Main Event will air on dates to be announced on CBS Sports Network.

Here are the final table results and payouts:

The late stages of the tournament were notably lacking in big names — even Aldemir, despite his track record, wasn’t well known outside hardcore poker circles. Once 2003 champ Chris Moneymaker was bounced in 260th place, there weren’t any other former Main Event winners left in the field.

But the competition didn’t lack for exciting hands. There was a wild quads vs. quads cooler early in the tournament that helped propel Ozgur Secilmis to the final table, and at that final table, Aldemir won a massive pot with a dream flop and an opponent who convinced himself the German was bluffing:

With the win, Aldemir becomes the answer to a trivia question: Who won the last World Series Main Event at the Rio?

The tournament series moved there in 2005 — although that year the final table played out one last time at the Horseshoe downtown, with Joe Hachem grabbing the bracelet in those familiar environs. From ’06 to 2021, every world champ has been crowned at the Rio, even in 2020 when COVID shutdowns necessitated a hybrid online-live version of the tournament.

But in 2022, as Caesars Entertainment announced on Wednesday, the World Series will move to the Las Vegas Strip, with Bally’s and Paris Las Vegas sharing host duties. The Series is scheduled to run from May 31 to July 19.

The 53rd Annual World Series of Poker will be held at @BallysVegas & @ParisVegas, May 31-July 19, 2022 w/ actor, comedian & card player Vince Vaughn as the event’s official Master of Ceremonieshttps://t.co/16a0gXpgQK pic.twitter.com/u7gHrrpIzA

Caesars announced over the summer its plans to sell one of its Strip properties but didn’t specify the casino. This news would appear to take Bally’s and Paris out of the running.