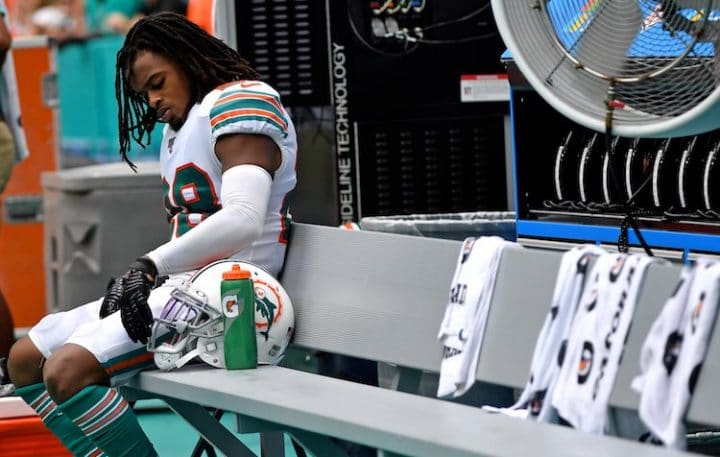 A dreadful start by the Miami Dolphins combined with an ongoing fire sale aimed at stockpiling draft picks has left sportsbooks scurrying to determine an equitable price for Dolphins’ betting lines against the spread.

Through two games, both at home, the Dolphins have been outscored 102-10 while fielding a lineup that more closely resembles a top collegiate program from South Florida than an NFL team. With the trade of defensive back Minkah Fitzpatrick to the Steelers on Monday evening, the Dolphins have quite clearly engaged full tank mode. There are even rumblings that the team could enter rarefied air in terms of futility. In the wake of a 43-0 defeat to the Patriots last Sunday, a headline from Slate.com read: The Miami Dolphins Really Want To Be The Worst Team In NFL History.

The shutout followed an embarrassing opener when Lamar Jackson torched the Dolphins’ secondary for 324 yards and 5 TDs in a 59-10 win. It marked the first time in Ravens’ history that a quarterback recorded a perfect 158.3 passer rating.

“I understand Tom Brady shredding the Dolphins’ D this past week but who expected Lamar Jackson to perform like Johnny Unitas?” said Johnny Avello, director of sportsbook operations for DraftKings Sportsbook.

A bettor at a @CaesarsPalace book has placed a $1,000 two-team moneyline parlay on the Patriots and Cowboys. Bet would net $45, per @The_Junkyard.

Now, the Dolphins enter a Week 3 matchup at Dallas as three-touchdown underdogs to the Cowboys. For context, the spread in NFL regular season games eclipsed 20 points only seven times between 1991 and 2018. At this rate, the Dolphins could push the total into double-digits before season’s end.

The last instance occurred in 2013 when a Broncos’ team led by a resurgent Peyton Manning closed as 26.5 favorites against Jacksonville in Week 6.

“This is a Dolphins’ team that potentially could go winless,” said Chuck Esposito, director of race and sportsbook operations at Sunset Station in Henderson, Nev.

Indeed, Station Casinos is offering a prop on whether the Dolphins will go 0-16 in the regular season. After opening at +600, a wager on “YES” has been bet down to +400. On the other side, a bettor who thinks the Dolphins will win at least once must wager $600 to win $100.

A quick perusal of the list indicates that bookmakers tend to wait later in the season before establishing large spreads in games with decisive favorites. Of the seven games, five occurred during the second half of the season. The two others, Bills-Colts in 1991 and Broncos-Jaguars in 2013, took place in mid-October.

Avello has a theory that explains the historical trend. Typically, defenses become worn down over the course of a grueling 17-week season, he says. The trends show that even a shaky defense can keep the margin close over the first two weeks before relenting when their playoffs chances are dim. The Dolphins, however, defy conventional wisdom.

When looking at the Dolphins’ 53-man roster that finished the 2018 season only around 20 remain, Esposito said. A roster turnover that dramatic is almost unprecedented, he emphasized. While the Dolphins are getting trounced early in the season, other dismal teams at least remained competitive. In 2017, the Browns went 0-16, but kept the margin of defeat within single digits seven times. By the same token, the Lions were only two touchdown underdogs twice when they went winless in 2008.

Coming off a narrow loss to the Giants in Super Bowl XXV, the Bills had high expectation for the 1991 season. Powered by a high-octane, no-huddle offense, Buffalo averaged 28 points per contest over their first six games. The Colts, meanwhile, had an aging running back in Eric Dickerson and few options for quarterback Jeff George at wideout. In their first six games on the season, the Colts scored six points or fewer five times. Making matters worse, the winless Colts held Dickerson out with a hamstring injury.

Although the Bills closed on the consensus Vegas line as 20.5 favorites, oddsmakers set the total at 40.5. This indicated that the books expected another low-scoring performance from Indianapolis against Bruce Smith and company. The books also had little faith that the Colts could stop Jim Kelly.

“They were such a dynamic offense with Jim Kelly and were going against the anemic Colts,” said Bob Scucci, vice president of director of race and sports operations at Boyd Gaming. “I remember at the time wondering if it was enough points.”

Though Kelly left the game early with an apparent head injury, it did not matter. The Bills pounded the ball on the ground all afternoon, as Thurman Thomas and Kenneth Davis each rushed for more than 100 yards. Buffalo easily covered in a 42-6 victory.

Two years later, the 49ers closed as 23.5 point favorites against the lowly Bengals — a rebuilding team that traveled to San Francisco with a 1-10 record. While Cincinnati had a young quarterback in David Klingler and struggled to move the ball, the 49ers’ tandem of Steve Young and Jerry Rice led an offense that scored 35 or more points in four straight games.

“I remember the 49ers the whole year were similar to the Patriots in 2007 in that every week it was parlays with the 49ers and the over,” Scucci said. “It was what we were trying to fade as bookmakers, Niners and over parlays.”

Young connected with Rice on a 44-yard pass on the first offensive play from scrimmage leading to a Ricky Watters touchdown. But the Bengals tightened on defense and cut the deficit to 7-2 on a safety by Alfred Williams. Two field goals later, Cincinnati went to the half with an 8-7 lead.

By then, the 49ers had little chance to cover. Still, Watters scored twice more in the second half as the Niners escaped with a 21-8 win. Although the 20+ favorites won straight up in all seven contests, they only went 1-6-0 against the spread, covering at a rate of 14.3%.

“Always keep in mind that these guys are pros and have pride in their craft, so when they’re put in a huge underdog role, additional motivation sets in,” Avello said.

Another stat tells a similar story. Since 2000, there have been 24 teams that have been favored by 17 points or more in an NFL regular season game. In those contests, the favorite went 9-13-2.

Bookmakers installed the Patriots as 20+ favorites three times during the 2007 season, all in the latter stages of the year as New England pursued an undefeated campaign. Heading into a Week 12 tilt against the Eagles, the Patriots crushed the Bills 56-10 to move to 10-0. Two weeks earlier, Brady threw for 3 TDs in a 52-7 win over the Redskins.

The Eagles, though, went toe-to-toe with the Patriots on Sunday Night Football. Patriots cornerback Asante Samuel opened the scoring with a 40-yard interception return, then Philadelphia regained the lead late in the second quarter on a Greg Lewis touchdown catch. Despite trailing for a good portion of the second half, the Patriots scored the winning touchdown on a 4-yard run by Laurence Maroney with 7:20 left.

“We won a lot on the game, but I was a little mad at myself because we gave up too much to the professional bettors,” Scucci said with a laugh.

From there, the Patriots also closed as three touchdown favorites against the Jets in Week 15 and the Dolphins in Week 16. The Patriots failed to cover in all three games.

“We were wondering how much the pressure of an undefeated season was weighing on them,” Scucci added. “It doesn’t mean that the teams can’t cover the big spreads but generally these lines are really, really inflated.”

Can we say this bettor loves the favorites this week? pic.twitter.com/BckJ1UDL9V

Dolphins’ outlook for remainder of the season

Following the matchup against the Cowboys, the Dolphins’ schedule becomes somewhat easier over the next few weeks. Bookmakers could still face an arduous task late in the season, especially if the Dolphins remain winless.

When the Dolphins face the Eagles on Dec. 1, there is a strong possibility that they could be three-touchdown underdogs again. Miami then has two winnable games against the Giants and Jets before closing the season versus the Patriots on the road. Scucci would not be surprised if the Dolphins wind up as a 25 to 30 point underdog at some point this season.

As more teams like the Dolphins opt to tear apart their rosters in order to rebuild for the future, large spreads may be more common.

“There is a huge disparity between the really good teams and really bad teams,” Scucci said. “I see it getting a little worse in the years to come.”