Line It Up: Are We Really Still Doing Brady Vs. Rodgers In 2022? 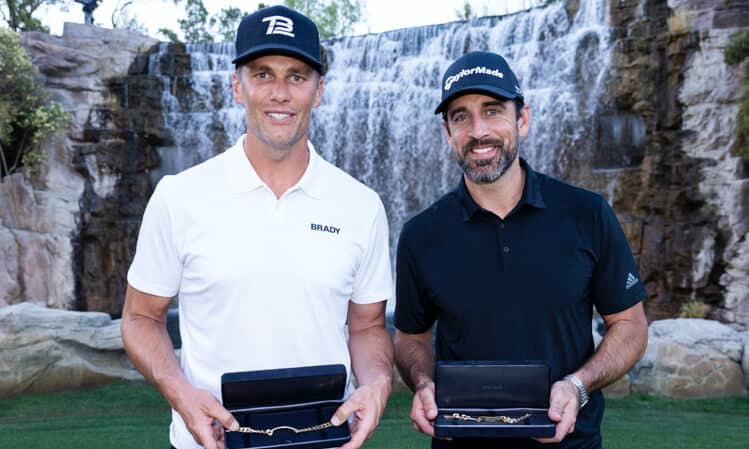 The year is 2038. It’s a standard 95-degree December Sunday at Lambeau Field (nope, the humans didn’t do so great in combating climate change) as the Green Bay Packers play host to the Tampa Bay Buccaneers, and hologram Chris Berman is fired up for another “Battle of the Bays.”

And out of the tunnel comes 61-year-old, 14-time Super Bowl champion Tom Brady, followed by 55-year-old Aaron Rodgers, who still only has one Super Bowl on his resume but is favored at DraftDuel Sportsbook to win his 19th consecutive MVP trophy.

Dismiss most of the above scenario as absurd if you must. But admit that if in, say, 2015, we’d told you 38-year-old Rodgers, having won MVP awards in his age-36 and age-37 seasons, would be heading to Tampa to challenge 45-year-old Brady on Sept. 25, 2022, you would have rolled your eyes at that notion too (the same way you probably would have rolled your eyes at the idea of … well, almost everything that’s happened in the world since 2015).

Anyway, here we are, it’s Week 3 of the 2022 NFL season, and we’re doing Brady vs. Rodgers again. It’s the marquee game of the late-afternoon Sunday window, Green Bay at Tampa Bay, home team favored by a field goal, the teams with the two shortest odds to win the NFC going head to head. (The Bucs can be found from +270 at Caesars Sportsbook to +325 at PointsBet for the conference title, while the Packers are +450 at PointsBet and +550 pretty much everywhere else.)

Brady vs. Rodgers, headlining again. And yes, you are required by law to hate at least one of these two guys.

We’re only 30 games into this NFL season, and already it’s been a weird one. The entire NFC West is 1-1, and the entire NFC North will be also if the Vikings lose in Philly on Monday night. A Joe Flacco-helmed team just won a game in a fashion the previous 2,229 teams in the same position failed to win. The NFC East has a chance after Monday night to have the best total record of any division in football — and none of the four teams has even had a chance to pad its record against another NFC East doormat yet.

Weird, wild stuff. Perhaps we should take comfort in the familiarity of Brady vs. Rodgers. And perhaps we should appreciate it even more knowing we might only see them go head-to-head a dozen more times before one of them retires for good.

But Bucs-Packers is just one of the many intriguing games awaiting NFL fans and bettors in Week 3. Let’s look at the opening lines and assorted betting odds and ends for the action ahead.

Most lines vary by half a point in either direction, with slightly different vigs from book to book, so it’s always advisable to price-shop at all the available mobile sportsbooks in your state. But here are the consensus (most commonly found) spreads for each of the 16 games in Week 3:

With two Monday night games still to come, there’s always the possibility that one of the four teams looks either so spectacular or so craptacular that a line shifts by a point or two.

But aside from those, Broncos-Niners has the most potential to swing. “Broncos -1” would be entirely logical if the raw Trey Lance were still under center for San Francisco. But he’s having ankle surgery and nearly every observer on the planet agrees Jimmy Garoppolo makes the 49ers better in the short term, so even at Mile High, this could shift to pick ’em or maybe the Niners by a point — especially with Russell Wilson cooking about as effectively this season as Eric Gordon in an academic decathlon.

Bronze medal: Lions +260 (BetMGM) at Vikings. Minnesota will be coming off a short week. If the Vikes happen to be 2-0 after Monday night, they could be ripe for a letdown. Division games are often close, even when one team is a notch above the other. And we know the Lions can put up a ton of points in short order. They’re an underdog for a reason, but they’re undoubtedly live.

Silver medal: Commanders +170 (WynnBET) vs Eagles. Philadelphia will be coming off a short week. If they happen to be 2-0 after Monday night, they could be ripe for a letdown. Division games are often close, even when one team is a notch above the other. And we know the Commanders can put up a ton of points in short order. They’re an underdog for a reason, but they’re undoubtedly live.

Gold medal: Jaguars +280 (PointsBet) at Chargers. The sportsbooks just keep pricing the Jags like they’re the same team they’ve been the last couple of years. It’s understandable — this is a franchise that has gone over six wins exactly once in the last 11 seasons. That’s a tough stench to shake. But they’re getting better, they just shut out Indy as 4.5-point underdogs, and Justin Herbert is either going to miss the game for the Chargers or try to win it playing through fractured rib cartilage.

Oh, and the Chargers have had no home-field advantage since leaving San Diego. And the sportsbooks will give us almost 3/1 against either Chase Daniel or a guy who grimaced with every late-game throw last Thursday? Yes, please.

Fans of the three-team (or more) teaser know what to look for: favorites of 6 or more who become very safe bets if you reduce the spread by about a touchdown. Here are this week’s options that fit the bill:

Pick three (or more), pick 6 points or 7 (or 6.5), and let the sweating of a +140 or so return begin. Or at least, that’s what we say most weeks. But not this week. There are only three games with spreads in the teaser zone, and we just got done explaining why we feel two of the ‘dogs could win outright. Save your teaser money for Week 4.

If you were torn between the Rams and the Browns last week, I hope you chose the team that didn’t quite complete its insane collapse. Let’s assume you chose wisely and you’re still alive in Week 3. Well, if you haven’t used the Chiefs yet, they would seem the safest choice this week and figure to be extremely popular. But we’ll also see a lot of people picking the Bengals over the Jets — and if you’re still in a survivor pool at this point, we know for a fact that you haven’t used Cincy yet.

We won’t know until Monday night whether last week’s suggestion of a flyer on Justin Jefferson at 80/1 is looking sharp. For the moment, Rodgers to win his third straight is as high as +1700 at FanDuel, which is decent value if he gets to 12 or 13 wins again with no name-brand receivers. But for a wild longshot, we noticed Garoppolo is around 40/1 or 50/1 at most books but is still sitting at 100/1 at PointsBet! If the Niners finish with one of the top records in the NFC — which they very well may — Jimmy G. has a narrative better than anything you could script.