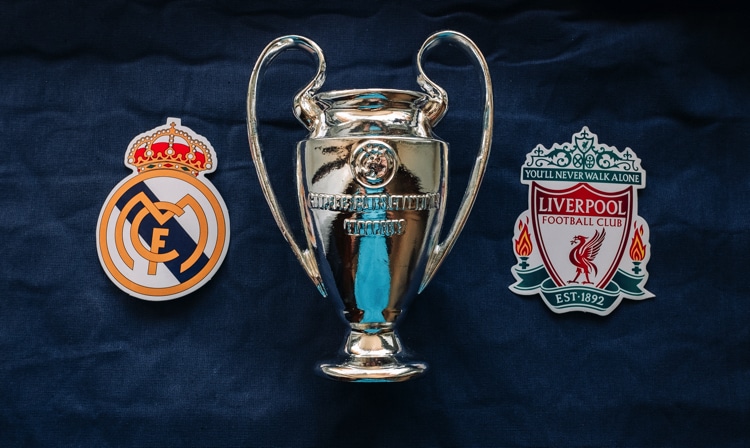 Two of Europe’s storied sides collide once more for the most prestigious club title in the world Saturday when Liverpool faces Real Madrid in the UEFA Champions League final at Stade de France just outside of Paris.

It is the second time in four years these sides face one another in pursuit of club soccer’s biggest prize. Real Madrid got the better of Liverpool in Kyiv 3-1 in 2018 for its 13th and most recent title. The Merseysiders would lift Ol’ Big Ears for the sixth time — tied for third most with Bayern Munich — the following season by beating Premier League rival Tottenham Hotspur.

Real’s triumph in Kyiv is remembered mainly for substitute Gareth Bale’s two goals, including a world-class bicycle kick in the 63rd minute that snapped a 1-all tie. Two of the three goals Liverpool keeper Loris Karius let in were howlers, and the Reds played most of the contest without star striker Mohamed Salah. He left the pitch in tears when dislocating a shoulder following a challenge from Sergio Ramos that many felt was questionable at best.

The two sides also met in the City of Lights previously in 1981, with Liverpool securing its third European Cup with a 1-0 victory through Alan Kennedy’s goal in the 81st minute. That is also Real Madrid’s last loss in the final of this competition, having won its last seven such matches. Real has four wins and a draw in its last five matchups with Liverpool and advanced 3-1 on aggregate in last year’s quarterfinals.

A mind-blowing bicycle kick… followed by a second goal to seal the deal!@GarethBale11 👏👏👏#InnovateYourGame pic.twitter.com/tULSa4ft5R

Fast forward to the present, and both squads still have large core groups from that 2018 encounter. Real, which won La Liga with relative ease by finishing 13 points better than eternal rival Barcelona, is led by striker Karim Benzema. He potted a league-best 27 goals in domestic play and banged home another 15 in just 11 matches during Champions League action.

Liverpool, which finished one point short to Manchester City in the Premier League title race for the second time in four seasons, is again led by Salah, the Egypt international who shared Premier League Golden Boot honors with 23 goals.

Oddsmakers have pegged Liverpool a solid favorite for this match, with the best value found Friday morning at DraftKings (+110). BetMGM and WynnBET are close behind at +105, while the Kambi platform for BetRivers and Barstool Sportsbook is listing the Reds at +102. Kambi is also the best place for Real Madrid backers at +270, with PointsBet and FanDuel trailing at +260 and Caesars and WynnBET both offering +255.

Resilient Real Madrid not to be taken lightly

More known as football royalty, Real Madrid was all about resiliency in the Champions League knockout rounds to reach its 17th final. Los Blancos became the first team to reach the final while trailing at some point in all three two-legged ties and overcame first-leg defeats to Paris-St. Germain in the round of 16 and Manchester City in the semifinals. In between, they rallied late at Stamford Bridge to advance past Chelsea 5-4 on aggregate after extra time after squandering a 3-1 lead claimed in their first-leg win.

Benzema, who has 15 goals in 20 career Champions League matches against Premier League foes, scored goals in nine of his 11 Champions League appearances this season and recorded hat tricks in back-to-back matches versus PSG and Chelsea. The France international is the top Real Madrid option for an anytime goal and the top overall option at some books. He can be grabbed at +155 at FanDuel, +148 on the Kambi platform, and +145 at Caesars.

No other Real player is below +200 to score during the 90 minutes, and values for those secondary options are fluid. Vinicius Junior can be had at +320 at BetRivers and Barstool, and +290 at FanDuel. Marco Asensio is listed at +360 at those three places, and those who think Bale can recreate the magic from his brace in Kyiv are best-suited for Kambi (+360) and Caesars (+350).

Rodrygo and Luka Jovic offer intrigue as second-tier options. Rodrygo, who scored the winner versus Manchester City and finished second to Benzema with five goals in Champions League play, can still be had at +600 at Caesars. Jovic, expected to make an offseason move to another European powerhouse, is a +290 option at BetRivers and Barstool.

One under-the-radar option worth weighing at Caesars is Benzema +500 to record an assist. Undeniably the primary scoring option, Benzema also has playmaking abilities and racked up 14 assists in all competitions for Los Blancos. Vinicius, who had a team-best 16 helpers, is a +350 choice to get one in this match.

Champagne football from Liverpool, which is laying it on Manchester United once again. Mohamed Salah gets the goal, and it’s 2-0!

Some of the sting in finishing second to Manchester City in agonizing fashion — Liverpool at one point was leading the title race on the final day of the season before City rallied to defeat Aston Villa — was eased to a degree as the Reds claimed both the FA Cup and Carabao Cup domestically. Liverpool’s chase of City has put it in a fine run of form — Jurgen Klopp’s team has 14 wins and four draws in its last 18 matches across all competitions.

While Liverpool’s path to Paris did not have the nerve-jangling swings of emotion Real endured, it was impressive. The Reds scored at least two goals in 11 of their 12 Champions League games, and the trident attack of Salah, Sadio Mane, and Roberto Firmino accounted for 18 of the 30 goals.

Salah, who announced his intentions to stay at Merseyside ahead of the match, is Liverpool’s top option for an anytime goal and still available at +145 at FanDuel and +138 at BetRivers and Barstool. Most oddsmakers rate Mane and Diogo Jota as equals for a second option, with Mane’s best play +220 at Caesars and Jota a +200 choice there. Firmino, who has fallen behind Jota in the pecking order, is a +260 option at Caesars and +245 at Kambi.

For those pondering assist plays at Caesars, Liverpool wide backs Trent Alexander-Arnold and Andrew Robertson are +200 and +275 options, respectively. The pair combined for 33 assists in all competitions this year and both serve as Liverpool’s primary takers on corner kicks.

Other plays to ponder

Given the offensive firepower of both teams and Liverpool’s tendency to occasionally shut off defensively, it is difficult to find good value for the “both teams to score” play. The best value is currently at Caesars at -145 for yes, though it is priced as low as -175 at Kambi. The best number for over 2.5 goals is -125 at Caesars, and the teams have surpassed that total in 16 of their 24 matches en route to Paris.

For those who like wagering with a hope of history to be made, Benzema needs two goals to match Cristiano Ronaldo’s single-season Champions League record of 17 goals. He is a +900 option at BetRivers and Caesars to bag the brace, and +4600 at FanDuel to set the new standard with a hat trick.