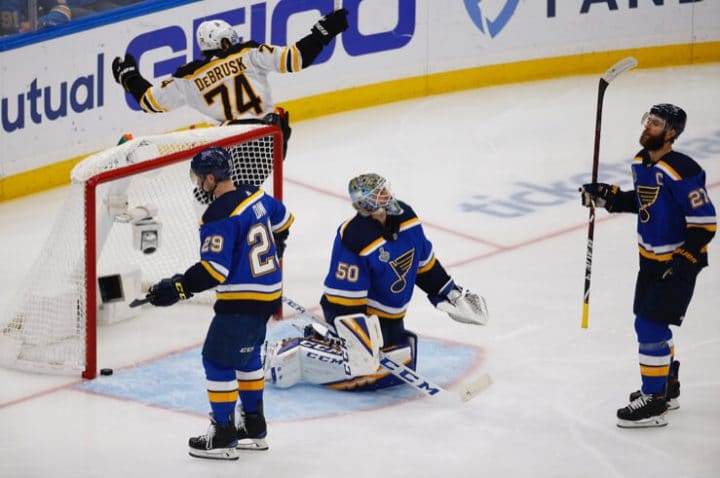 This is your last chance, Scott Berry.

He’s had countless opportunities over the past few weeks to land somewhere in the middle, either by selling his sports betting ticket for a five-figure sum or by making a hedge bet, but the die-hard St. Louis Blues fan who bet $400 on his team back in January when they were a cellar dweller with 250/1 odds to win the Cup has thus far refused to budge.

As Berry has made clear, he’s a Blues fan first and a sports bettor second, and he’s concerned he’ll jinx the team by hedging. “I’m very superstitious and don’t want to ruin any juju,” he told ESPN.

Berry has been offered as much as $75k on the site PropSwap (minus a 10% fee) for the ticket when the Blues led the finals against the Bruins 3-2. But he won’t sell. With the series now knotted at 3-3 and the Blues on the road for Game 7, the bet slip is worth about half as much as it was last weekend. But here’s how superstitious Berry is: When “Cousin Sal” Iacano jokingly asked Berry on his podcast this week if he’d take $101k for the ticket, the Blues lifer didn’t answer immediately.

Like a handful of others who got in on the Blues early, Berry is living the longshot dream.

Serious bettors consider him a square for refusing to mitigate his risk. And here’s a question to consider: If we aren’t being results-oriented, is he a square just for making the bet in the first place?

“I don’t spend much time looking at futures markets because the house edge is extremely high. A typical futures market has a 20-25% vig,” says professional sports bettor Captain Jack Andrews (not his real name). “It’s very tough to overcome that with quantitative analysis.”

Andrews doesn’t speak for all pros, of course, but his mindset seems typical of many who earn their living betting on sports, that longshot futures tend to be geared more toward the recreational bettor who wants an extended sweat.

“The entertainment value a casual bettor might find having their action spread across an entire season makes the proposition have some value,” Andrews notes. “You’ll find that there’s a high correlation between bettors betting with their heart and holding these longshot wagers. For a more technical bettor like myself, futures rarely make the cut.”

It’s not a perfect analogue, but there’s some overlap between Andrews’ mindset and that of daily fantasy sports players who focus on cash games rather than guaranteed-prize-pool tournaments. The former is a lower-variance approach where you just have to be better than one or two opponents at a time; GPPs can be more like lottery tickets (except with skill involved in selecting your numbers), and they can pay off huge — every week during football season, people are turning $20 into $1 mm — but are more likely to drain an average player’s bankroll as he chases the dream.

“Longshot futures bets may look alluring, but they’re a miniscule part of my portfolio for a few reasons,” Peabody says. “First, they tie up money for months, so I need a bigger edge to justify betting them. Second, most books are risk-averse and will limit the to-win amount. If I have a 25% edge on a 100/1 longshot, I’ll be lucky to be able to risk $500 on it. While it wins $50,000 if it hits, my expected return is still only $125.

“But even if I wasn’t up against limits, the risk/return profile of the bet dictates that I’ll want to wager an extremely small fraction of my bankroll on these longshots.”

Andrews and Peabody are both more willing to put their money behind a longshot when the investment isn’t so long term.

Peabody puts serious time into crunching numbers on golf every week, looking for outright winners to bet who have longer odds than he believes they should. (He shared a few U.S. Open picks this week on the Bet the Process podcast that he co-hosts with Jeff Ma.) The biggest longshot he ever hit was 218th-ranked Ted Potter Jr. in the 2012 Greenbrier Classic at 999/1, after Peabody’s calculations indicated Potter’s true odds were 650/1.

Andrews also will consider the occasional longshot futures bet, as long as the “future” in question isn’t too distant. “When I do play futures,” Andrews says, “I look for shorter time periods.”

Not that this qualifies as much of a longshot, but Captain Jack bet on Kawhi Leonard to win NBA Finals MVP at +300 before the series began, preferring that payout to the slightly lower price on the Raptors to win the title. It was a smart bet (Leonard is now in the -300 range at most books), but the payday, if it comes in, is never going to get Andrews profiled on ESPN the way Scott Berry has been. The wild underdog dart-throw just isn’t his style as an analytical pro.

If Andrews and Peabody speak for the day-to-day sports betting grinder, and Berry is the avatar of the rainbow-chasing amateur, then Brad Feinberg falls somewhere in between. Feinberg doesn’t bet sports for a living, but he takes it very seriously, is a sports gambling analyst for NBC Sports in Philadelphia, and earned a few of his 15 minutes of fame in January when he sold a New Orleans Saints Super Bowl futures ticket to Iacono and Clay Travis at the perfect time.

For Feinberg, who got the Saints at 20/1 almost a year earlier, longshot futures are where a significant portion of his betting bankroll goes.

“If something’s 100/1 and I think the odds should be 75/1, I will bet that,” Feinberg tells US Bets. “I will always bet something I think’s going to lose if the odds are higher than I think they should be.”

The longest odds that ever came in for Feinberg were on the 2006 Detroit Tigers to win the American League pennant, a key bankroll-building bet for Jeopardy! champ James Holzhauer as well.

He’s currently looking good on another baseball bet: He put $5k on the Minnesota Twins, current owners of the best record in the league, to win the World Series at 100/1 before the season began, believing the Twins to be underrated and their AL Central rival the Cleveland Indians to be overrated.

“I’ve been very fortunate with injuries to Indians players,” Feinberg humbly notes. “On top of me being right, I’ve gotten a million breaks.”

He’s not always right — he also backed the Washington Nationals before the season began, and that’s not working out so far — but you don’t have to be right often with these longshot bets. You just have to nail one every now and again, and be willing to sell your ticket or hedge to lock in a sizable profit. Feinberg says he strongly considered betting on the Blues during the winter, but was a little late to the party and saw their odds had dropped to 40/1 or 50/1, and he didn’t think it was worth it anymore. Now he’s left to vent about the lunacy of Berry riding his bet out.

“It infuriates me as a gambler, that he thinks he’s betraying his city if he hedges,” Feinberg says. “I wish I could speak to the guy and tell him the city of St. Louis doesn’t care if he hedges his bet.”

Feinberg does admire Berry’s betting instincts, however, and believes the mid-season longshot hockey bet is always worth looking for.

“The Blues were way out of the playoffs, and these sportsbooks, the numbers will get stale, they’ll maybe get lazy with a team that’s playing well under the radar,” Feinberg explains. “And I’ll look for these teams. Especially with a sport like baseball or hockey, if you make the playoffs, you have a chance. If you’re the 16th seed in the hockey playoffs, you can win the Stanley Cup.

“So I’m always looking, every day, I’m looking at every team. In hockey and baseball, you can find a gem like that if you’re patient and you’re constantly looking. It’s usually easier to find in-season, because the sportsbook will have a stale number. Usually they update the odds on Sunday night or Monday morning, so I know, if I’m going to bet, do it on Sunday. Sometimes you’ll find a team that’s in 12th place in the conference, and they’re just a couple points out of the playoffs, but the books don’t look at how close they are, they just see them in 12th place and don’t adjust the odds.”

Another example: Feinberg says he bet Memphis to win next year’s NCAA basketball title at 120/1 based on the sense that new coach Penny Hardaway was about to land some elite recruits. They’re now down to 20/1.

And not that Feinberg makes these bets for the purpose of having bragging rights, but that can be an ancillary benefit. It’s given Berry a moment in the sun. Controversial tout “Vegas Dave” Oancea built his bankroll and a reputation he’s spun into millions of dollars with a couple of successful longshot bets (though detractors insist he bets on countless underdogs and then shows off only that rare wager that hits).

Unfortunately, after what Leicester City did as 5000/1 longshots in the Premier League in 2016, odds much longer than the 250/1 that Berry pounced on are nearly impossible to come by these days.

But the “next Blues bet” is out there somewhere.

Maybe it’s the Texas Rangers, +5500 to win the World Series and +3000 to win the AL pennant at FanDuel Sportsbook, winners of 11 of their last 15 (though against some suspect opposition), a Wild Card team if the season ended today.

Maybe it’s the Cincinnati Reds, who look at first glance to be struggling at 29-36, but have been unlucky with their +32 run differential (ninth best in baseball) and are a not-catastrophic 8 games out in the NL Central. The Reds are 100/1 to win the NL at multiple sportsbooks.

Maybe there’s a crazy underdog lurking in the NFL. In a mediocre division, with a new head coach (finally), maybe the Cincinnati Bengals will shock some people at 200/1 at PointsBet to win the Super Bowl. (Considering they’re only 100/1 elsewhere, you’re at least getting a good deal.) If that’s a little too crazy for you, maybe the Tennessee Titans at 70/1, coming off three straight 9-7 seasons, strike you as good value.

Of course, there are always longshots worth considering in golf. Gary Woodland or Sergio Garcia, both at 85/1 to win this weekend’s U.S. Open, perhaps?

But that’s not exactly a “Blues bet” situation, since the bet either wins or loses just a few days after you make it. It’s a longshot, yes. But there’s less future to that futures market, limiting the ESPN attention and Prop Swap opportunities.

Not every bettor likes to devote time and energy to committing percentages of their bankroll to these wagers. But for sports fans, they’re fun to follow. Especially when we’re not the ones who are staring down the barrel of a six-figure swing based on 60 minutes of hockey tonight.

Casino Win In Maryland Falls For First Time Since November 2015 — Sports Betting To The Rescue?

Louisiana’s Sports Gaming Efforts In 2019 Were A Dumpster Fire

To Hedge Or Not To Hedge? For Chiefs Or 49ers Futures Ticket Holders, That Is The Question