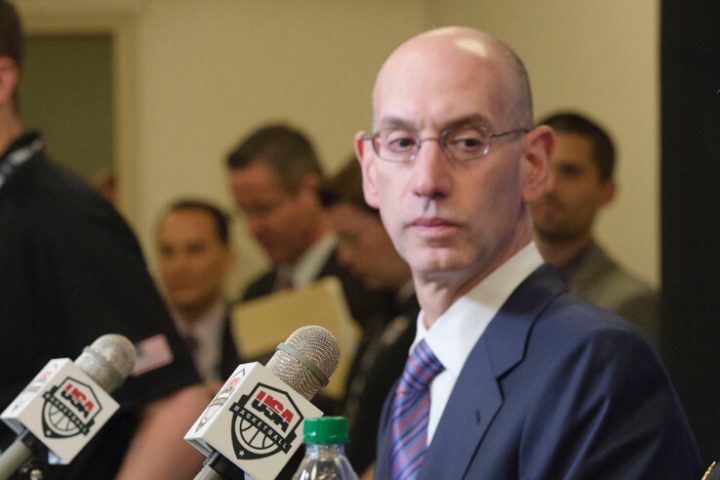 NBA Commissioner Adam Silver and MGM Grand CEO Jim Murren on Tuesday announced a partnership that makes MGM the official “gaming partner” of the NBA — a deal that entitles MGM to market that status, as well as to signify that the company’s properties have access to NBA “official data.”

But it was later in the press conference in midtown Manhattan that arguably the bigger news dropped: Murren mentioned MGM’s Borgata property in Atlantic City and said that “at the end of this week we’ll be taking mobile bets from Borgata and Play MGM in New Jersey.”

The details are a matter of speculation, but that presumably will position Borgata to become the first of many casinos and racetracks in New Jersey to offer online sports betting. It’s expected that quite a few of them will have the online option in place by the start of the college football season in four weeks.

It was the NBA-MGM partnership, however, that powered the press conference, and Silver spoke openly about his position on sports betting.

“It’s no secret,” Silver said, “that our first choice was to have a federal bill that provides a consistent national platform for sports betting.”

What he got instead, of course, was a U.S. Supreme Court ruling in mid-May that erased the Professional and Amateur Sports Protection Act of 1992. New Jersey — which fought the major sports leagues and finally won a six-year battle — and Delaware already have ended Nevada’s virtual monopoly, with Mississippi to follow tomorrow.

The NBA, MLB, and the PGA Tour have shopped around the idea of an “integrity fee” in exchange for providing official data. But Nevada hasn’t had one for 70 years, and officials from those organizations were angrily dismissed last month at a New Jersey Assembly hearing in Trenton by committee chairman Ralph Caputo.

This announcement appears to be a pivot. Silver said he hoped that other casino operators would feel the need to follow suit to avoid a potential market disadvantage in Nevada. Still, he acknowledged that states offering leagues a cut of sports betting is “an uphill battle.”

That’s a curious idea, since MGM has offered betting on the NBA and other sports for decades without the league’s imprimatur. I twiced asked Murren at the press conference if he would be at this event if not for the end of PASPA. Murren said he couldn’t answer a “hypothetical.”

Not a new relationship

MGM owns the WNBA’s Las Vegas Aces franchise and partners with the NBA in its annual summer league.

“This wasn’t just about doing the right thing from an intellectual property standpoint,” Silver said. “This is a way for Jim to differentiate his business from his competitors with this ‘official gaming’ status designation.”

Silver said the deal, the terms of which were not disclosed, does not hinge on the volume of betting on NBA games. He called the agreement “a leap of faith for both sides” in a “moderate-length” agreement. He added that he still hopes to see some state legislatures consider the so-called integrity fees. (ESPN’s Darren Rovell reports the MGM deal at $25 million over three years.)

Less than two years ago, the NBA made headlines by announcing a new deal with Sportradar to make them the league’s “official provider of real-time NBA statistics.”

How does that play into this MGM news? It doesn’t.

“Our deal with Sportradar is only operative outside the U.S.,” Silver said. “So the official data feed that will be provided to MGM will either come directly from NBA or from a partner yet to be named.”

On a side note, the press conference strayed off topic, awkwardly, when Silver was asked about MGM’s decision to sue many of the victims of the mass shooting in Las Vegas last year (a decision designed to move the proceedings from state to federal court, but one that sparked much criticism). He and Murren handled the issue smoothly and diplomatically. That both responded so well to a potential stumbling block of a question can only be taken as an encouraging sign for the professionalism of the partnership between their two organizations.

Haskell Numbers Are In: Monmouth Park’s Newfangled Betting Options Off To Modest Start