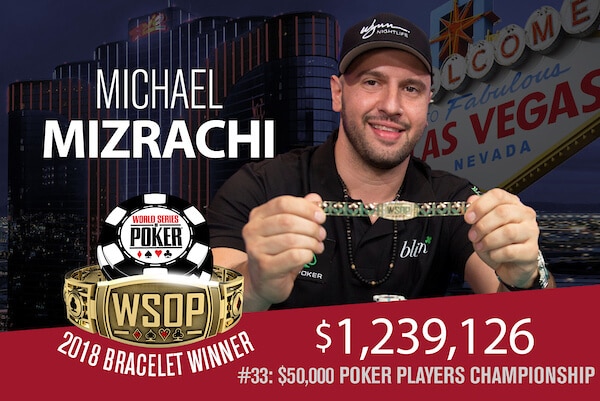 When Michael “The Grinder” Mizrachi claimed the World Series of Poker’s $50,000 Poker Players Championship last Tuesday, it was one small step for The Grinder, and one giant leap for Mizrachi-kind.

Within moments of a 10 of hearts landing on the turn, completing The Grinder’s flush and relegating John Hennigan to second place, the poker world seized on the historic nature of the accomplishment. Mizrachi became the first player to win this prestigious mixed-game tournament three times. Considering that it debuted in 2006, that’s an insane level of success.

Many felt that with the win, the 37-year-old pro secured first-ballot induction to the Poker Hall of Fame once he turns 40. Others deemed his victory in this event in 2010, 2012, and 2018 right up there with Johnny Chan’s near-threepeat in the WSOP Main Event in the ’80s.

But taking it a step further, Michael became one of two Mizrachi brothers with four bracelets — his big bro Robert has a couple for each wrist as well. Add in Michael’s two World Poker Tour titles and many other triumphs since he got started online at age 18, his twin brother Eric’s nearly $250,000 in lifetime tournament winnings, and magician brother Daniel’s $28,000 and change (not to mention the little bit of success Michael’s ex-wife Lily had before their split), and there’s a case to be made that the Mizrachis are the reigning first family of poker.

If you total up the brothers’ live tournament earnings, there are in fact 23,880,941 cases to be made for them. But that doesn’t mean they’re the only family in the conversation.

Running down the top poker families

It comes as little surprise that there are so many power families in the poker scene, as having a relation to a prominent poker player, either via bloodline or marriage, is a built in advantage for anyone hoping to improve their game.

Two-time Main Event champ and 10-time bracelet winner Doyle Brunson is probably the most important poker figure of the 20th century. They don’t call him “The Godfather” of the game for nothing.

The author of the paradigm-shifting book Super/System passed his poker proficiency down to his kids — most notably son Todd, who won a bracelet in 2005 and has generally done his best work in cash games. But daughter Pamela is no slouch herself, with a career-best cash of nearly $35,000 in the 2007 WSOP Main Event.

“Texas Dolly” retired this month — whatever “retirement” means in a sedentary game such as poker — after one last final-table run in the WSOP’s $10K Deuce-to-Seven Championship. But his legacy lives on, and the Brunsons have combined for $10,661,843 in live tourney earnings.

It’s probably a little soon for Jason Mercier and his wife Natasha (Barbour) Mercier to qualify for first-family consideration. But with Jason well into eight figures in career cashes and Natasha into seven figures, and with Jason’s five WSOP bracelets and EPT title and her having made two WSOP final final tables, they have to be considered a threat to ascend to the throne soon. Over $20 million in combined earnings cannot be ignored.

And once son Marco, who was born in October 2017, is old enough to play, forget about it. This kid is genetic poker perfection. He’s the Jaden Agassi of cards. Until Phil Ivey and Daniel Negreanu can figure out how to make a baby together, Marco Mercier is the prototype.

Just because you don’t like them doesn’t mean they weren’t great poker players. Howard Lederer and his sister Annie Duke both fell out of favor with much of the poker community after Black Friday. (Funny how that happens when you’re either the founder of Full Tilt Poker and you don’t pay people their money or you were the commissioner of the Epic Poker League and you went belly up owing millions.)

But the first family of poker doesn’t have to be the most beloved family of poker, and Lederer and Duke combined for three bracelets and $10,733,293 in live tournament winnings. Because neither of them has won anything since Black Friday, it’s easy to keep them out of consideration for the top spot. But that wouldn’t have been the case a decade ago.

Every WSOP gives us feel-good stories, and this is among the tops in that department this summer. On June 20, Farhintaj Bonyadi won the $1,000 WSOP Super Seniors bracelet at age 83, making her and son Farzad “Freddy” Bonyadi the first ever mother-son World Series champs.

With a combined $4,573,685 in live tourney earnings, the Bonyadis are still a long way from being the most accomplished poker family ever. But when you have a three-time bracelet winner who gets to say, “My mom has a bracelet too,” they’re at least worthy of a mention.

Barry Shulman, wife Allyn, and son Jeff have combined for three bracelets and $10,032,500 in tournament winnings, and if not for the fact that they’ve been relatively quiet, results-wise, the last several years, the family that owns CardPlayer magazine would be in the mix here.

The father-son duo of Lyle and Bradley Berman have $3,670,445 in total tournament winnings, plus Lyle has won three bracelets and is the chairman of the board of the WPT. Jay and Lonnie Heimowitz are on a similar plane, with six bracelets (all belonging to dad Jay) and $2,772,927 in earnings. And Chip and Karina Jett, with a combined $2,777,044, had a solid claim to being the best husband-wife team until the Merciers got hitched.

For the record, couples like Liv Boeree/Igor Kurganov and Phil Laak/Jennifer Tilly don’t count because they aren’t married and thus aren’t technically families. Also, Tilly once made a river check so startlingly weak that Phil Ivey had to pick his jaw up off the felt, thus disqualifying her permanently from any “best” conversations.

For much of the modern poker era, the Brunsons were the first family of poker. But with the combination of Doyle’s retirement and The Grinder’s fourth bracelet win, the torch has been passed.

The Mizrachis boast the highest total tournament earnings and they’re the only family that features two multiple-bracelet winners. Texas Dolly will always be the godfather, but there’s a new first family of the felt.

A King Without A Throne: How LeBron James’ Free Agency Is Shaking Up The 2019 NBA Title Odds

No-Limit Hold’em Alternatives At The WSOP Are On The Rise, With One Surprising Exception