Where Have You Gone, Kiké Hernandez? My GPP Lineups Turn A Lonely Eye To You 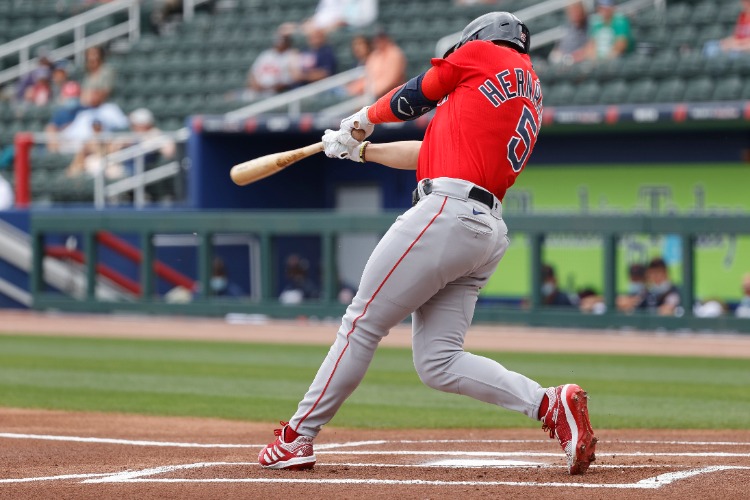 This is a minor issue, as A) I’m not a MME MLB guy, maybe two or three or four lineups per slate, and B) almost all my MLB play ends up on DraftKings, as I prefer the two-pitcher format, and C) this is a 1:05 p.m. start, and I work for a living writing about sports betting. Hmmmm ….

SATURDAY MARCH 28, 4:38 p.m.: Figured I’d pitch a “Bill Simmons-esqe running diary” of my DFS exploits to the bosses here, and they bit! So now my job Thursday is playing MLB DFS. Not too shabby.

All I know is that I’m definitely not starting to build lineups until I listen to the Morning Grind, read Dave Potts’ column, and check Kevin Roth’s weather report.

Might as well take a peek, right? I’m sure Potts will drop his column soon enough. What’s the worst that could happen? All right, first thing that jumps out at me: The Red Sox are facing John Means, a lefty, and I know J.D. Martinez and Kiké Hernandez are lefty killers. Looks like a Boston stack is going to be a thing.

SUNDAY MARCH 29, 10:35 a.m.: Does Kiké know the spelling of his name, despite the flashy accent mark, is … well, you know, a wee bit problematic? The more traditional “Kiki” would be better. Hate to see the guy get canceled because of a misunderstanding on the pronunciation of his name. Having said that — and speaking as a Jew — I’d play Hitler if he were second base eligible with a career .820 OPS against lefties.

TUESDAY 9:35 a.m.: Hey, look at that! Potts dropped his column. All right. Let’s dig in. Here’s something that jumps out at me: “I am quite interested in having a few shares of Means while everyone else is busy stacking the Red Sox against him.”

Welp, I guess A) my initial take that I need Red Sox stacks was on point and B) just call me Chalky C. Chalkstein over here.

11:58 a.m.: Holy crud: Talk about a guy who is dedicated to the craft. Potts’ column came in at 14,588 words. To give you an indication of what that means, consider this: The Great Gatsby came in at 47,094 words, and not once did F. Scott Fitzgerald see fit to discuss Kyle Hendricks.

WEDNESDAY 5:54 p.m.: I’ve built 17 lineups so far. I have 82% Kiké Hernandez. This does not bode well. Other players I’m way too heavy on for baseball, period, never mind baseball, game one, day one: J.D. Martinez, 65%; Hunter Renfroe, 52%. Obviously having a hard time getting off the Red Sox. Sheesh. Who else … Tommy Pham and Fernando Tatis checking in at 41% each. Go Padres, go Red Sox. On the pitching side, a little more spread out, but not enough Bieber or Cole. Back to the drawing board. Who’s playing shortstop for the Royals … is a question I’d really rather not ask.

THURSDAY 9:55 a.m.: Holy bleeping bleep, the Red Sox game is postponed. Not my Kiké! This is … upsetting. Good thing I’m writing about this adventure, otherwise I’d really have to take a day off to futz around with the lineups I’ve already built. Too early for a bourbon. Mimosa? Ack. This is no time for champagne. Third cup of coffee, then.

11:58 a.m.: I don’t want to say I’m just mashing buttons at this point, but let’s just say when you’ve got a double stack featuring the bottom of the Twins roster, well …

12:08 p.m.: All right, I’m locked and loaded, assuming I guessed right on the 4 p.m. lineups. We’ll see. Padres chalk everywhere. Hopefully they’ll hit and I’ll match it up with a lower-owned stack and take this thing down for $100,000. (Typing this while my at-minimum 17-year-old air conditioning unit is being replaced. Go Tatis!)

12:28 p.m.: Best part about today is undoubtedly going to be the fact the Blue Jays, Marlins, and Tigers — three teams I have zero exposure to — are going to be in the winning lineup.

12:30 p.m.: Third best part: Forgetting how much variance there is in baseball DFS, being reminded of it 10 minutes into the slate when something terrible happens to my team.

1:01 p.m.: Should add here that I have seven DraftKings linueps set to go at the main slate over there. Going to need to find time to build NBA lineups, finish work, and introduce myself to my wife and two kids.

1:06 p.m.: The rest of this is probably going to be pretty boring, as reading about someone else’s actual DFS exploits is only slightly better than hearing about a bad beat at the $1-$2 table. Feel free to skip to the bottom to see how I did.

1:35 p.m.: Gerrit Cole and Shane Bieber already giving up hits and runs. Who said what about variance, and Tigers and Blue Jays players finishing in a winning lineup?

1:45 p.m.: Tons of Yankees and Indians stacks. Is it too early for the {shovel money into furnace} gif?

1:55 p.m.: Bieber is not yummy or holy today. I’ll be here all week. Tip your waiters and waitresses.

2:30: And the Pirates drop two on Hendricks. Forgot to mention also have zero Pirates exposure. But don’t worry! Plenty of Hendricks. Variance can take a flying leap.

3:19 p.m.: At least Bieber got his Ks. Redeemed. This is not as much fun as I was hoping for, tbh. At this point of the day I was hoping to share a screenshot or two of how great I was doing.

So go ahead. Ask me how I’m doing.

The next few hours were mostly spent wondering what would’ve happened if the Red Sox game wasn’t stupidly postponed ….

5:01 p.m.: My ability to choose only the pitchers that got touched up today is uncanny. I mean, just about every single pitcher I took either didn’t come close to their ceiling (Bieber, Cole) or got lit up (Gibson, Castillo, Hendricks). Next opening day I’m going to go with 100% Tyler Glasnow. instead of 5%. I should jot that down in a Google doc or something. 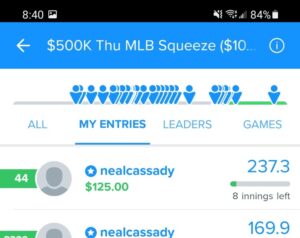