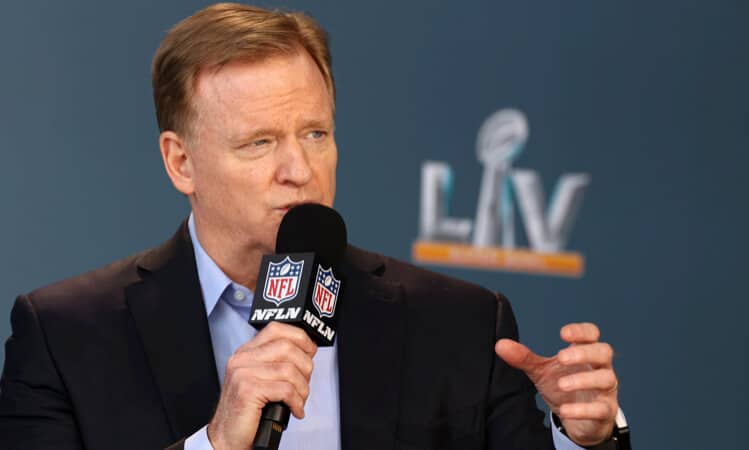 NFL Commissioner Roger Goodell, March 28, 2017: “I think we still strongly oppose legalized sports gambling. The integrity of our game is No. 1. We will not compromise on that.”

Gee whiz, someone sure seems to have changed his tune.

I have my suspicions about which of those three it is, but I’ve never met Goodell, never talked to him on the phone, never talked to anyone who knows him well, so it just doesn’t seem fair for me to try to reach conclusions about the inner workings of his brain, past and/or present.

What I will say definitively is this: Certain external factors have changed. In 2017, single-game sports betting was legal and regulated in only one state, and aside from letting a franchise relocate to Las Vegas, there weren’t many clear-cut ways for the NFL to benefit financially from it. In 2021, single-game sports betting is available legally in 22 U.S. jurisdictions, and leagues and teams have spent the last three years finding ways to work with sportsbooks and increase their own bottom lines.

I hope you’re sitting down, because I have a groundbreaking theory here: Money is the No. 1 motivating factor behind every decision for a league that boasts annual revenue of about $15 billion.

Well, integrity and money can’t both be No. 1.

OK, perhaps I’ve tipped my hand as to which of the three possible explanations for Goodell’s turnabout I subscribe to.

Cash plays at this table

There’s nothing necessarily wrong with a business being motivated by money. That’s how capitalism goes. Goodell’s job is to make money for the 32 owners. He surely wants exciting games and fewer concussions and fair outcomes, but making those owners richer is how he ensures he’ll maintain his lofty, well-compensated position. Everything else is secondary.

When it comes to sports betting, the NFL has a mafia mentality: You can run your little business in our neighborhood. Just give us a taste, and we’ll get along just fine.

Over the many years in which sports betting outside Nevada was purely the property of underground bookies and offshore websites, the NFL couldn’t see a way in financially, so it objected to the activity. In 2021, wowsers, this totally harmless sports betting thing sure seems like a super-fun way to “engage fans.”

Goodell brought up sports betting last week in announcing the NFL’s new TV contracts, and there’s been talk of football getting in on the increasing trend toward gambling-focused live sports broadcasts. It’s a perfectly logical direction to go in. It’s just wildly inconsistent for a league that in the not-so-distant past was forcing Tony Romo to cancel a fantasy football convention.

And of course, this is the league that not too long before that sued the state of New Jersey to stop it from offering sports wagering. Goodell’s testimony on this subject in a 2012 deposition was awash with inconsistencies on why daily fantasy sports (permitted at the time in most states) was not a threat to the integrity of the games but sports betting (not permitted at the time in any state but Nevada) was.

You bet, you sweat

Goodell and the rest of the NFL power brokers have always known that. There’s no lightbulb that suddenly went off when the first legal wagers were placed in Delaware and New Jersey.

In terms of viewership, there are only two potential downsides from the legalization of sports betting. One is the onslaught of sportsbook commercials turning someone off, thus leading that someone to turn their TV off. The other is people doing poorly betting on a sport and disengaging entirely from the sport as a result.

Clearly, the NFL has now reached the conclusion that those two groups of negatively impacted people combined don’t add up to enough to counterbalance those people watching more football because they can have a financial stake in every game.

Again, nobody should be surprised that Goodell has done a public about-face on sports betting. Just follow the money, and you’ll see that he … well … follows the money.

If someone was to call Goodell out on the inconsistencies between what he’s saying now and what he said back in the day, we could expect he’d play some version of the “I’m not here to talk about the past” card. And understandably so. The anti-sports betting era of the NFL is over. There’s big money to be made now by being pro-sports betting.

So get used to the new NFL party line, in which sports gambling isn’t the threat to the integrity of the game we were always told it was. Integrity is a lovely thing to claim as your No. 1 priority. But integrity doesn’t buy private jets and third homes.