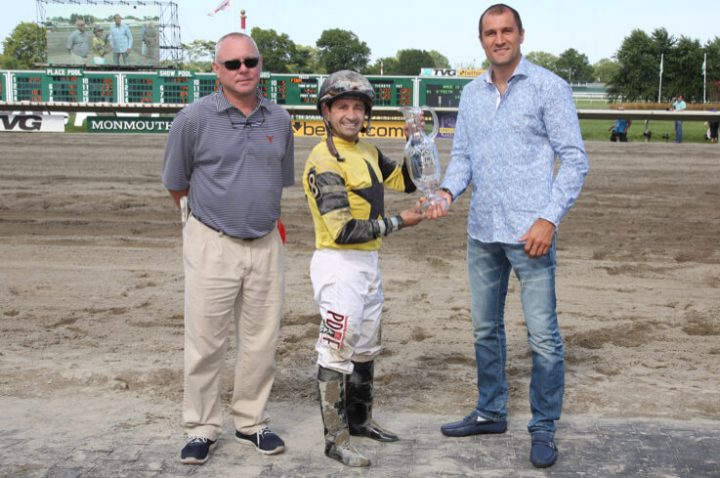 While Sunday marked the 51st running of what is now known as the betfair.com Haskell Invitational at Monmouth Park Racetrack, it also marked the first time that visitors had the option to both bet on the horse races and wander over to William Hill’s adjacent sportsbook and bet on … well, almost anything.

“It was basically what we had expected, as was the crowd figure of about 37,000,” track operator Dennis Drazin told USBets.com, adding that the on-track handle of nearly $2 million was “down just a tick.”

Off the beaten track

“Some people I talked to were intrigued,” Drazin said, “saying that they felt as if they could win the first three legs, then at home they can watch the ballgame to see if they have a wining ticket.”

(I had the last three legs correct, but missed with popular Unchained Melody in the 10th race. My ticket said that the “Max Win” for my $5 bet was $10. That strikes me as light for getting four bets correct, including a baseball game that basically was 50/50.)

Drazin said afterward he would have been just as happy for the baseball segment to have been the Yankees-Royals early game, leaving the Haskell as the anchor leg of the bet.

Will there be more offbeat betting at Monmouth Park next weekend and thereafter? Drazin said that is likely, adding that his bookmaker partner William Hill will drive that discussion in the weeks ahead.

As for sports betting, Drazin said his weekend numbers after a month of action are settling in at just under $500,000 handle on Saturdays and on Sundays. That’s in the same ballpark as the Meadowlands Racetrack, which has only been open for three weekends. Big M owner Jeff Gural told USBets.com that weekend betting was “on the upswing” over the previous two days.

Keep in mind that the Meadowlands wraps up its standardbred season with Saturday’s running of The Hambletonian. And while harness racing then goes idle there until October 12, the thoroughbreds — after concluding the Monmouth meet on September 9 — fill the void at the Meadowlands with races on Fridays and Saturdays in the three subsequent September weekends. The only fall weekend with no racing at all at the Meadowlands is October 5-6.