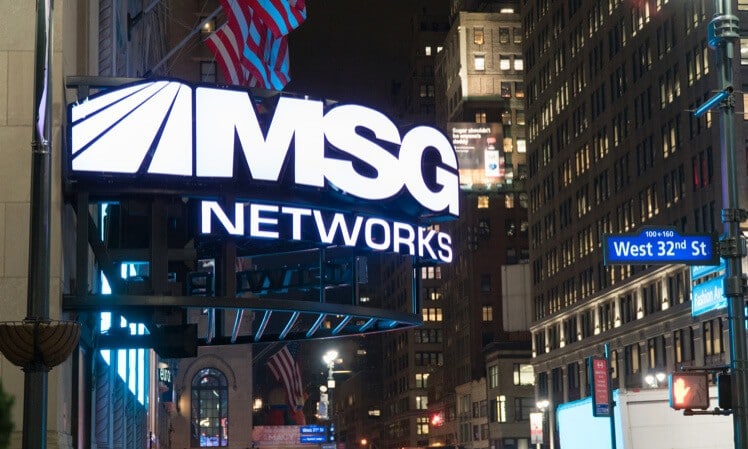 Legal and regulated mobile sports betting isn’t coming to New York state until 2022, but MSG Networks is not waiting for that kickoff to offer its own launch into the new business.

On Wednesday, MSG launched what it calls “a content push that signifies the network’s continued foray into sports betting, as it aims to engage fans in a fun and informative way.”

So gamblers in the New York City/northern New Jersey region are now able to watch three new shows on the topic. New Jersey operators began taking mobile and in-person bets in 2018, not long after a landmark U.S. Supreme Court ruling opened up Las Vegas-style sports betting to any state that decided to legalize it.

On Wednesday, MSG premiered The Bettor Half Hour, planned as “a fast-paced, energetic show that will give an inside look at the sports betting landscape.” Host Alex Monaco’s goal will be to educate viewers on how to approach sports betting by breaking down effective betting strategies, analyzing storylines, and reacting to the latest odds each night.

Gambling industry leaders and experts also will be featured regularly on the program, which airs Monday through Thursday at 5 p.m.

Immediately following that show on those four nights is The Betting Exchange, another half-hour program that actually debuted as a weekly show in September.

The show is hosted by sports betting on-air personalities Katie Mox and Jeff Johnson, offering news and analysis through the sports betting lens while providing insight into the nuances of betting.

Former Giants wide receiver David Tyree — who achieved sports immortality with his “helmet catch” in the Giants’ stunning Super Bowl win over the New England Patriots in 2008 — heads what is expected to be a rotating mix of New York-area athletes as recurring guests.

Among them will be former Jets safety Erik Coleman, while sports betting experts including Minty Bets, Alex Glaze, and Sean Little also will regularly join Mox and Johnson. The plan is for the panel to debate upcoming game lines, player props, over/under totals, future bets, and other gambling options.

The third show, Odds With Ends, will air for an hour starting at 11 a.m each Sunday during the football season, hosted by Tyree and former Giants teammate Mathias Kiwanuka.

That show will provide betting analysis, picks, and predictions in the lead-up to kickoff. The first episode will air this Sunday.

Kiwanuka, a 2006 first-round pick, went on to record 38.5 sacks during his nine seasons with the Giants, good for ninth on the franchise’s all-time list. Tyree earned All-Pro and Pro Bowl honors as a special teams player with the Giants in 2005.

“As I go from the defensive line to now breaking down betting lines, I’m looking forward to connecting with the fans again every Sunday morning on MSG Networks,” said Kiwanuka. “David and I will provide fans with a unique perspective around sports betting that only former players can give. We will chop it up and deliver analysis that will be helpful for NFL fans betting on games each week.”

A mix of other former New York athletes will regularly join this program as well.

MSG executive on the new strategy

“With the rapid rise in sports betting interest around the country, we are excited to expand the reach of the MSG Networks brand and further immerse our fans in the sports betting culture,” Kevin Marotta, MSG Networks senior vice president of marketing and content strategy, said in a statement. “We will significantly increase our sports betting presence with the launch of these fun and energetic shows, which will uniquely position us to become one of the premium destinations for sports betting content.”

The sports betting programming airing on MSG Networks will also be available to watch on MSG GO, the network’s livestreaming and video-on-demand platform.

MSG also is debuting a new social media handle on both Twitter and Instagram tied to sports betting, called @MSGPlusMinus.

That handle will serve as the dedicated social media home for the network’s sports betting initiatives. The @MSGPlusMinus channels, along with MSGNetworks.com and the network’s YouTube page, will feature exclusive content and highlight top picks.