NBA Betting Preview: Raptors Have Formula To Score Upset Over Sixers In First Round 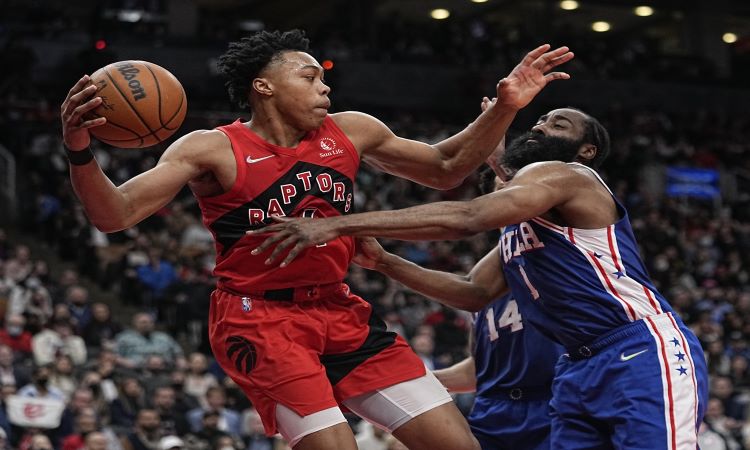 The Toronto Raptors will be heading to Philadelphia to open the first round of the playoffs at 6 p.m. ET Saturday against the 76ers.

It’s the third time these Eastern Conference foes will meet in the playoffs after the previous two clashes both ended in dramatic fashion and required the full seven games to be decided. In 2001, Vince Carter, who made the controversial decision to attend his University of North Carolina graduation the morning prior to a do-or-die Game 7, missed a buzzer-beater that would’ve sent Toronto to the conference finals.

Kawhi Leonard delivered some sweet redemption for the Raptors in 2019, nailing a buzzer-beating fadeaway to end the Sixers’ season and send Toronto to the Eastern Conference finals. The Raptors would, of course, ride the momentum of “The Shot” to eventually claim the franchise’s first NBA title.

This year’s opening-round series has all the necessary ingredients for another nail-biter. Expectations were low in Toronto after franchise cornerstone Kyle Lowry was shipped to Miami last summer, but head coach Nick Nurse has found a way to maximize his young, talented roster.

Toronto was 14-17 and in 11th in the Eastern Conference in late December after the team experienced a COVID-19 outbreak, but it rallied to go an incredible 34-17 the rest of the way. The team’s defense was ranked 21st around Christmas, but improved to finish as the seventh-best unit in the NBA (107.1 points allowed per game).

The Sixers, meanwhile, have posted an awesome 32-15 record since January 1, and will have the best player on the floor in Joel Embiid, who just constructed an MVP-caliber season. When paired with James Harden, Philadelphia boasts one of the most devastating duos in the league, providing Harden’s wonky left hamstring holds up throughout the playoffs.

The Raptors won the regular-season series 3-1, including a couple of victories in the last three weeks over Philadelphia.

NBA championship outright odds: Raptors +6500 to win the NBA title. There are 13 teams with better odds than Toronto, including the 76ers (+1300) — FanDuel

How Toronto can win: “Philadelphia is certainly the more heralded team, and they’ll have the claim of ‘best player in the series’ with MVP candidate Joel Embiid,” Raptors reporter Blake Murphy, who has covered the team for a decade for various media outlets (including The Athletic), told US Bets. “Where the Raptors could steal a couple of games, or even the series, is how the rosters shape up beyond that. If Pascal Siakam continues to play like an All-NBA piece and James Harden has the usual ebbs and flows we’re used to from him, there’s a real chance the Raptors have the second-best player in the series. If that’s the case, they don’t need to stack too many marginal advantages to make this a coin-flip series.

“There should be plenty of room for those marginal edges, too. The 76ers are woefully thin, even more so in games in Toronto due to Matisse Thybulle’s vaccination status, and Toronto has consistently hammered the non-Embiid minutes in this matchup over the years (including two recent meetings). The formula for the Raptors is to make Embiid’s life hell, play the starter minutes even, and win the non-star minutes comfortably. That’s all easier said than done, which is why Philadelphia in six games will probably be the most popular pick, but it’s not impossible for the Raptors.”

Embiid’s averages in three games versus the Raptors this year are 29 points, 11.3 rebounds, and 2.7 assists with a true shooting percentage of 58.6%. Toronto has clearly had issues slowing Philly’s big man down, as it lacks a true center to guard him. The Raptors have great overall size and mobility at nearly every position except point guard, but they don’t have a player on the roster taller than 6-foot-9 or who weighs more than 235 pounds to shadow Philly’s massive 7-footer, who tips the scales at roughly 280 pounds.

The absence of Thybulle, a NBA All-Defensive team selection in 2021, for Games 3 and 4 in Toronto, and also possibly Game 6, could add to the Raptors’ advantage in those contests. To be considered fully vaccinated in Canada, one must be two weeks past a single shot of the Johnson & Johnson vaccine, or two weeks past the second shot of the two-dose vaccines. Thybulle does not currently meet those vaccination requirements, and won’t be allowed to enter Canada as a result.

Raptors players to watch: Siakam loved playing against the 76ers this season. The Raptors didn’t have Fred VanVleet and OG Anunoby in any of the three games Siakam played against the Sixers, boosting his usage rate to 33%, his highest against any team this season. He had a healthy 50.7 field-goal percentage and 57.8 true shooting percentage against Philly while averaging 30.3 points, 9 rebounds, and just over 8 assists.

The health of VanVleet is a concern. The first-time All-Star, who sat out Toronto’s last three games to rest his ailing knee, likely won’t be 100% for the playoffs. However, his 11-day layoff is about the same length of absence that he took off between games near the All-Star break for the same knee issue. VanVleet responded by going from minus-70 over two games immediately following the All-Star break to a plus-103 in his last 13 games of the year.

Harden played two games as a Sixer against the Raptors this season and shot just 8-for-24. Only four defenders in the NBA guarded Harden on more possessions this season than Barnes, who defended Harden for a total of 18 minutes and 22 seconds over three games, according to NBA tracking data. Harden was held to 12 points during that span by Barnes and committed six turnovers. If Barnes can continue to effectively slow down Harden, the Raptors will have a fighting chance in the series.