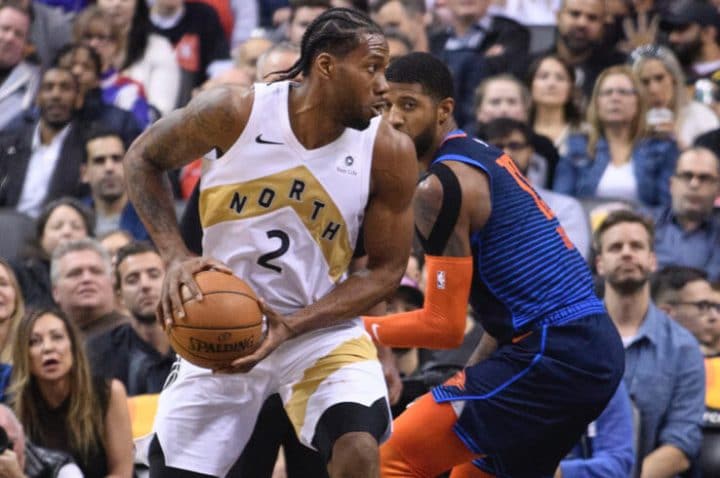 Basketball is a star-driven sport. With only five players from each team on the court at a time, a single elite player changing teams has more impact in the NBA than it does in any of the other major team sports.

And when two elite players go to the same team at once, one of them totally unexpectedly, that tends to cause a massive shakeup. It’s roughly the equivalent of a baseball team acquiring a completely new pitching staff made up entirely of all-stars.

The Los Angeles Clippers already had a solid lineup that earned an eight-seed in the Western Conference last year and pushed a relatively healthy Golden State Warriors team to six games in the first round of the playoffs. So what happens when you take that solid lineup and add Kawhi Leonard and Paul George — the reigning NBA Finals MVP who just might be the best all-around basketball player alive right now and a six-time all-star who finished third in the MVP voting last season, respectively?

What happens is the sportsbooks need to take the betting odds off the board and think things over for a little while.

Leonard (somewhat expectedly, as long as you didn’t listen too closely to Chris Broussard) and George (totally out of the blue) joining the Clippers last Friday night was the biggest development in a free-agency period full of them: The Lakers acquired Anthony Davis; the Nets got Kyrie Irving and Kevin Durant; Kemba Walker went to the Celtics; Jimmy Butler signed with the Heat; Al Horford jumped to the 76ers.

Once the sportsbooks reopened the betting on Saturday morning, the prices looked nothing like what they had a month before, a week before, or even a day before.

Kawhi was rumored last week to be heading to the Lakers (dropping their title odds as low as 7/5) or staying with the defending champion Raptors. When he did neither, the two LA teams passed each other on the odds board as they zoomed off in opposite directions, the top non-Toronto Eastern Conference contenders saw their odds shorten, George’s former team the Thunder plummeted, and, well, the whole futures betting picture looks entirely different. The Clippers front office grabbed the Etch A Sketch and gave it a good shake.

After surveying odds in three different states with legal brick-and-mortar and online sports betting, here’s a look at the prices, as of Monday, July 8, on all of the realistic 2019-’20 NBA title contenders and a few intriguing teams on the fringes:

Will There Ever Be Another Two-Time WSOP Main Event Champ?