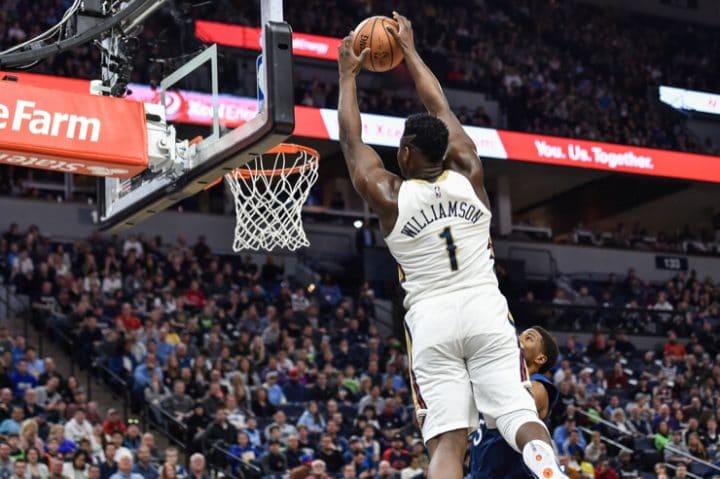 The NBA will return at the end of July for an eight-game regular season to decide playoff seeding, a thinly veiled ploy to get Zion Williamson and New Orleans into the postseason (don’t blow this Pelicans).

The restart will reignite postseason races and present sports betting opportunities, primarily for what could be a wild sprint for the eighth seed in the Western Conference.

Following the eight games, if the ninth-place team is within four games of the final playoff spot in its conference, it will advance to a play-in competition against the current eighth seed. (Note that making it to the play-in tournament does not count as making the playoffs for postseason futures bets.)

This is all for Zion

In the East, the Wizards are the lone team on the outside looking in. Currently 5.5 games behind eighth-place Orlando, Washington has some work to do. The West is much tighter, with Portland, New Orleans, and Sacramento all deadlocked at 3.5 games behind eighth-place Memphis. San Antonio is just behind at four games back and Phoenix is six games back.

While the eight-game regular season gives all the teams in striking distance of a playoff berth a shot to make the postseason, this is all about New Orleans, right? If the Pelicans could’ve overtaken the Grizzlies before the COVID-19 shutdown, there’s a tinfoil hat argument that the NBA and commissioner Adam Silver would’ve scrapped the regular season and moved straight to the playoffs.

But the league would get a boost from having its brightest new star in the postseason. Fans deserve to see the high-flying, fast-paced Pelicans in the playoffs. And the world needs LeBron vs. Zion in the first round.

Knee surgery delayed Williamson’s debut until late January, and New Orleans scuffled to a 17-27 record without him. From his arrival on Jan. 22 through the Pelicans’ most recent game on March 8, the team went 10-9 with him in the lineup (he sat out Feb. 8 against Indiana, a victory). Extrapolating that .526 winning percentage over a full season might be a stretch, but it’s fair to say New Orleans is much better than the .386 winning percentage from before Williamson’s first appearance.

New Orleans is +290 at FanDuel Sportsbook and +300 at DraftKings Sportsbook to make the playoffs. Memphis is at -145 and -143, respectively. The Pelicans beat the Grizzlies in both of their regular season matchups, one with Williamson and one without him. The teams match up again on Aug. 3.

Portland is the only other contender in the West given a realistic hope to make the playoffs at either sportsbook, coming in at +420 on FanDuel and +400 on DraftKings. Sacramento, San Antonio, and Phoenix are each +850 or worse. The Trail Blazers have a dark horse MVP candidate in Damian Lillard and will have big men Jusuf Nurkic and Zach Collins healthy, but have plenty of trouble on the defensive end (27th in defensive rating) and lack offensive firepower beyond Dame and C.J. McCollum (with all due respect to Carmelo Anthony).

The Pelicans’ restart schedule shakes out quite favorably, with four games against non-playoff teams (Spurs, Wizards, Kings twice) and two against the current eighth-seeds (Grizzlies and Magic). They open up against the Jazz (current fourth seed) and Clippers (current second seed), but after that it could be smooth sailing.

New Orleans to make the playoffs is a strong bet at both books, and there’s also the opportunity to bet Memphis not making the playoffs at +125 on FanDuel and +108 on DraftKings.

The season restart will take place in three arenas at the ESPN Wide World of Sports Complex near Orlando. So, no more home games for anyone. The Magic will only be about half an hour from the Amway Center, but with no fans in attendance the proximity doesn’t really matter.

This means any home court advantage is out the window. Most of the remaining 22 teams obviously have solid records at home and on the road, because these are the squads with the best overall records to begin with. But a few disparities stand out.

No team won more home games than Philadelphia, and the 76ers’ 29-2 mark was one game better than top seed Milwaukee. Philly is only the sixth seed right now, which suggests they struggled badly on the road (because math!). Sure enough, the 76ers went 10-24 away from the Wells Fargo Center, worse than all but six other NBA teams.

Miami had similar splits, going 27-5 at home (third-best) and 14-19 on the road (13th in the league). Brooklyn, Orlando, and Memphis were the only other teams currently in playoff spots that were below .500 on the road, though all three were also below .500 overall. The Heat have the fourth seed in the East right now.

What to do with Washington

The Wizards are not good. But! The Magic and Nets are also not good. Washington is 5.5 games behind Orlando and six games behind Brooklyn. Remember that the play-in matchup is triggered if any team is within four games of the eighth seed. That additional tiebreaker scenario would require the ninth-place team to win two straight games over the eighth-place team to take its place.

The Wizards would be really interesting at +1700 on FanDuel and +1300 on DraftKings to make the playoffs if John Wall was going to return for the regular season. Alas, Wall will continue to recover from his ruptured Achilles and wait for the 2021 season to make his comeback. Sharpshooter Davis Bertans sitting out to prevent injury as he enters free agency also hurts.

Perhaps even more notable is Brooklyn and Orlando matching up twice. Somebody has to lose those games, which helps the Wizards make up ground.

Washington beat the Nets in both regular season meetings, though they went 0-for-4 against the Magic. Still, who’s to say the Wizards can’t sweep them in a two-game set after four months off? The decent chance that Washington forces the play-in tournament and the long odds for them winning it make the team a solid bet.

Of course, the reward for whichever bottom dweller grabs the last spot is getting swiftly annihilated by Milwaukee. Then again, an NBA season has never before paused for four months and then restarted. The whole situation is unprecedented and unpredictable, and there is no such thing as a sure thing.