Pro sports gambler Brad Feinberg shares strategies for betting on the most volatile three months of basketball that fans have ever seen. 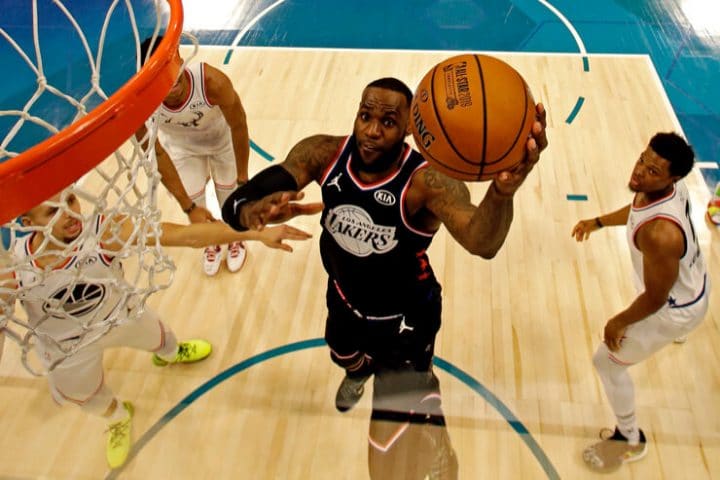 The NBA returns Thursday. Forget almost everything you think you know about NBA sports betting.

On March 11, the league became the first major sports organization in the United States to suspend its season due to the COVID-19 pandemic, after Utah Jazz center Rudy Gobert tested positive for the virus. After almost five months of inactivity, professional basketball will resume this week, but the NBA won’t quite pick up where it left off.

Twenty-two of the league’s 30 franchises will compete in an eight-game extension of the regular season, followed by a slightly augmented postseason format. For weeks, the players, coaches, and select team officials have been living and practicing inside a coronavirus-free (for now, fingers crossed) bubble at Walt Disney World in Orlando, Fla.

So far, the NBA’s pandemic precautions have been effective, with the league reporting zero positive COVID-19 cases among its 346 players earlier this month. But that doesn’t mean the restart has been a smooth or transparent process.

Some players have been forced into additional quarantine after violating bubble protocols in Orlando. Some, including Houston Rockets all-stars James Harden and Russell Westbrook, arrived in Florida weeks after their teammates. (Harden’s prolonged, unexplained absence prevented U.S. sportsbooks from posting lines for the team’s first game and raised hackles from the sports gambling community about the league’s opaque reporting of roster availability.) Some players, like Indiana Pacers all-star center Domantas Sabonis, have already left the bubble with season-ending injuries. And at least one player, the Los Angeles Clippers’ third-leading scorer and reigning NBA Sixth Man of the Year Lou Williams, will be forced to miss his team’s first handful of games because he picked up some chicken wings from an Atlanta strip club during an excused absence from the Orlando bubble.

The unprecedented conditions of the remaining NBA regular season and playoffs will introduce variables that no bettor can comfortably predict: What happens when the entire postseason is played on a neutral court, with no fans? Which players will have recovered from nagging injuries since March, and which will suffer new injuries during the process of ramping up to compete at the level of intensity required for playoff basketball after being sidelined for more than four months? Which teams will maintain the cohesion and execution they had in March, and which will sputter once competition begins?

Predicting these outcomes with certainty will be a fool’s errand, but sports gamblers and sportsbooks will find themselves facing the same uncertainties as the volatile NBA restart gets underway. To glean some insight into the uncertain terrain sports wagerers will wade into when NBA basketball returns, USBets spoke with Brad Feinberg, a professional sports bettor and on-air gambling expert for NBC Sports Philadelphia.

Finding an edge through information

“Linemakers are inherently going to place the teams that were the best, pre-pandemic, as the biggest favorites, because they have no choice but to do that,” Feinberg said. “But there’s never been this kind of layoff before.”

By tracking the news about player injuries, absences, and quarantines, Feinberg said he has already been able to find value in placing bets faster than sportsbooks have been able to adjust their lines.

For example, Feinberg recalled betting against the Utah Jazz, who opened as a 2-point favorite over the New Orleans Pelicans in Thursday’s re-opening doubleheader. The Jazz had lost Bojan Bogdonavić, their second-leading scorer, who had season-ending wrist surgery in May. The team also faced chemistry concerns over reports of a rift between the team’s two most important players, Donovan Mitchell and Rudy Gobert, because Mitchell held Gobert responsible for infecting him with COVID-19 in March (even though there’s no way to prove how Mitchell contracted the virus). Despite these concerns, the Jazz still opened as favorites over the Pelicans, and Feinberg was able to lock in a favorable bet before the line shifted. New Orleans is now a -2.5 favorite at DraftKings and BetRivers, a -2 favorite at FanDuel and PointsBet, and a -1.5 favorite at BetMGM.

“It’s really not rocket science,” Feinberg said. “If you can just really monitor the news, and if you see something happen — boom, go to that sportsbook right away. Bet that game before they can move it because they’re managing a hundred things at once, not just the NBA. They’re looking at every MLB game, they’re looking at every hockey game. It’s hard for them to really be fast. I’m looking for little edges like that.”

“Take that for data”

Perhaps it’s time to revive the infamous postgame words of former Memphis Grizzlies head coach David Fizdale, who lashed out at sports analytics after a first-round playoff game loss in 2017. During the 2020 NBA reboot, much of the long-term data that sportsbooks use to set betting lines and that professional gamblers use to gain an edge on the books could be rendered moot by the unprecedented circumstances and volatile environment in which the teams will compete.

“This is probably the most random experience we’re going to get ever in sports history,” Feinberg said. “Pre-pandemic, NBA closing lines were really sharp and hard to beat. Those numbers were so freaking sharp, so efficient. There’s some people who are really talented and can do it, but you have to be in the 2% of the world that can do it.

“Right now, these closing lines, for the first time ever, they may not be efficient,” Feinberg continued. “We’re rating the Bucks and Clippers a certain way based on their record. But some of these teams are going to be better or worse. Everyone’s going into it a little blind.”

So if the databases that sportsbooks use to set lines may be thrown out of whack, then the analytics-oriented professionals who design their models to produce incremental advantages over those lines cease to deliver the same edge.

“It’s a unique situation that no one has ever had to deal with before,” Feinberg said. “I don’t know if we can trust the point spread, and I think it is a lot harder to trust those databases because they’re always going off the closing line as the data point, and I don’t know if these closing lines have any accuracy.”

Feinberg plans to seek advantages in the NBA’s topsy-turvy brave new world by focusing on in-game betting and franchises that possess talented rosters but face long odds of winning a conference or NBA championship due to disappointing pre-pandemic regular seasons.

“The lines may be way off at first, but the bookmakers are smart,” Feinberg said. “They’re going to be studying these games the way the gamblers are. Eventually, it’s going to be harder to take advantage of these edges, which is why I think in-game is a really good way to attack it. Because in-game, the books are not going to adjust. If Team A is killing Team B and they just keep assuming Team B is going to come back because they have the better pedigree, I’m not so sure that’s going to happen.

“I like in-game betting far better than betting individual games because I trust my eyes,” Feinberg went on. “And more times than not, I’m better than the algorithm that’s making the line. If you’re watching and you see that certain players just don’t look good or they’re wearing cement shoes ’cause they’re sluggish, you can glean an edge that way.”

Likewise, Feinberg said that despite the historical unlikelihood of major NBA playoff upsets, if there’s ever going to be a time to bet on a team with long championship odds, it’s now. “I would not be taking the Bucks or the Clippers to win it all at 3-1, or the Lakers at 2.5-1,” he said. “Not because they’re not the best teams — they proved they were before the pandemic, but who knows what’s going to happen now? Usually in basketball, the best teams never lose, but these are not normal times. This is the year where I could see the best team losing. So I’m very cognizant of, if the team does not look good at the beginning, I’m not necessarily going to say they’ll bounce back. Maybe they won’t. Maybe there’s been a fundamental change.”

So which longshot NBA championship bet has caught Feinberg’s eye so far? Perhaps it’s a homer pick for a gambler who appears regularly on NBC Sports Philadelphia, but Feinberg cited the Sixers, whose NBA title odds range from +2000 to +2500 at major U.S. online sportsbooks, and who will resume the season with a new starting lineup and a recovered-from-injury Ben Simmons. Philly had been a chic preseason pick to win the Eastern Conference, but their starting lineup failed to jell during the regular season, and many NBA observers wrote them off as a disappointment.

“They’re the one longshot team that intrigues me,” Feinberg said. “Before the pandemic, they had no chance. They were dead as a doornail. But when Ben Simmons got hurt, Shake Milton played really, really well, and now that they’re going to start Milton at point guard and move Al Horford to the bench and Simmons at forward, that’s a fundamental change. They have a chance to be a new team post-pandemic, and I gotta be honest, I think they can beat anyone.”

According to Feinberg, flexibility could prove to be gamblers’ greatest asset during perhaps the most unpredictable stretch of NBA basketball in league history. It’s about the ability to trust one’s judgment and ride the success of a team that didn’t produce gaudy win-loss records or point differentials prior to March, and the ability to adjust when circumstances change and that team — or any other — begins to falter.

“No one really knows about any of this,” he said. “It reminds me of COVID. When’s it gonna end? No one knows. These are the smartest people in the world — guys who go to Harvard, Yale. Everyone’s guessing. And to me, it’s the same thing with sports restarting. You may think you know, but you don’t know what any individual team is going to look like. You’re trying to glean as much information as you can, but you’re really just guessing.”