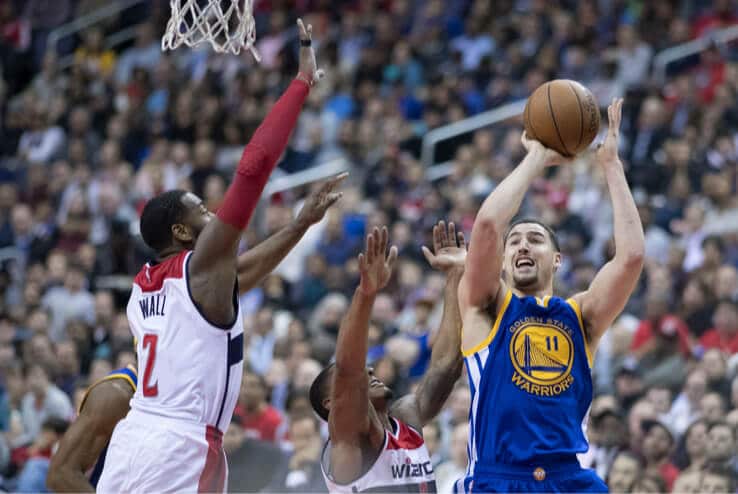 The Golden State Warriors and Klay Thompson’s respective explosions on Monday night were an extreme case, but offense is truly out of control across the whole NBA a couple of weeks into this basketball season. (I mean, Derrick Rose, who I could have sworn was out of the league, just went off for 50.)

Before we get into the sports betting aspect, let’s explore how unusual this increase in points scored is and what might be causing it.

Scoring has been trending upward fairly consistently since dipping to 96.3 points per team/game in 2011-’12. But as you’ll see if you closely examine the numbers on Basketball-Reference.com, the changes were always incremental. Three points here, two points there.

This increase of six points in a single season to 112.3, the highest the league has seen in nearly 50 years (since 1970-’71), is almost unheard of; the only time it’s happened in modern history was between ’98-’99 and ’99-’00, when the average went from 91.6 to 97.5. That year, new rules were implemented specifically to increase offense, most notably one that made it harder to play physical defense.

If your gut instinct when you look at this year’s scoring increase is to pin it on players continuing to improve at shooting, you might want to stop trusting your gut. Shooting accuracy is actually down across the board, the three-point arc to the free throw line and all points in between:

So why is scoring up?

The numbers say players are ever so slightly less accurate than last season, so why are the scoreboard operators busier?

There seem to be four reasons:

Are the lines adjusting?

The lines the sportsbooks are setting are higher than in years past … but they’re not high enough. Through Tuesday’s games, according to The Action Network, overs were 61-41-1, cashing at a 59.8% clip. Hence the declaration earlier in this article that “bet the over” is a profitable piece of advice.

The over/under totals posted by the books are up, as gambling writer Kevin Rogers spelled out on Twitter in response to a question from RotoGrinders’ Dan Back:

There are four games on tap for tonight that had totals posted at FanDuel Sportsbook in New Jersey as of this morning, and all of them are over 220 — they range from 223.5 to 231. So is it time to start betting unders?

This is a sample size of one game, but the sharps tried that on Saturday with the Utah-New Orleans game, as ESPN’s David Payne Purdum reported. The line opened at 225 and got bet down to 219. In the end, 243 points were scored.

What about former professional sports bettor Haralabos Voulgaris’ famous technique of targeting unders in the first half and overs in the second half, when the clock stops repeatedly if the game is close and more points are racked up? That’s not easy to take advantage of these days, as bookmakers long ago got wise to the fact that first halves and second halves aren’t the same.

Interestingly, exploring Monday’s historic Warriors-Bulls game shows just how carefully the sportsbooks are thinking things through. The total for the first half at FanDuel was 118 (which the Warriors nearly beat on their own). For the whole game, the total was 229, meaning it was functionally 111 for the second half. The books were projecting a blowout (correct) in which the clock wouldn’t stop a lot in the final minutes and bench players would see lots of action (correct).

Regardless, this was definitely a night to bet the over.

If you want to keep it simple, you could keep riding out the overs until the lines have adjusted all the way up to reality and a 50-50 over/under split.

If you want to make it more complicated, bet the overs on individual player scoring. Joel Embiid is averaging 27.0 ppg, but his line tonight is 25.5. Kemba Walker is averaging 30.1, but tonight his line is 26.5. The margins aren’t huge, but you can find advantageous spots if you look hard enough.

And here’s something to look out for: That crazy pace of 101.5 possessions per team per 48 minutes could slow down as the season wears on and legs get tired. Look for teams heading into the second game of a back-to-back. Look for teams in February or March that have been playing their best players for heavy minutes and are showing signs of beginning to run a little less.

Winning at sports betting is often about staying a step ahead of the books. If you can predict the scoring slowing down a game or two before everybody else does, you can build a bankroll off the phrase “bet the under.”

Will Colorado Stay Ahead Of The Pack With Sports Betting Like It Did With Recreational Marijuana?