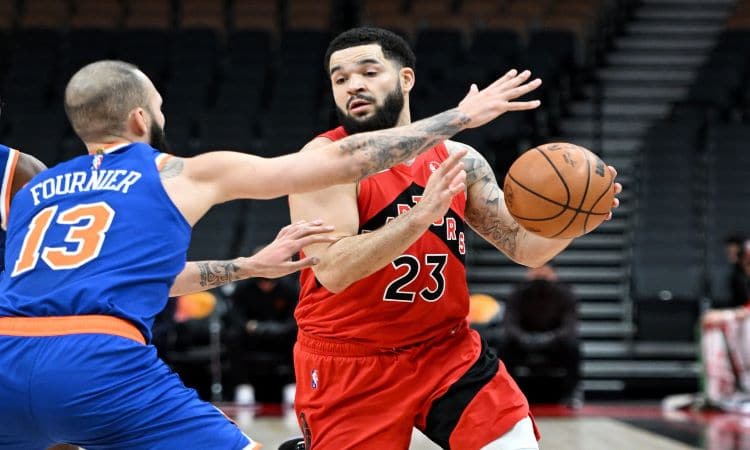 The weather in Toronto gets frosty this time of year, but that hasn’t stopped the Toronto Raptors from being a hot bet over the holiday season.

Toronto has been very generous to its bettors lately, posting a 7-1 record ATS (5-3 straight-up) over its last eight games since Dec. 10. A 144-99 shellacking suffered Dec. 26 at the hands of the Cleveland Cavaliers accounted for the only blemish ATS during the run, but you can hardly blame the Raptors for that dud. Many key players were missing due to injury/COVID protocols, including Fred VanVleet, Pascal Siakam, Gary Trent, OG Anunoby, and Scottie Barnes.

For those who believe the overall trend will last, the Raptors are favored against the visiting San Antonio Spurs Tuesday night by 5 1/2 points, with the total set at 226.5 (PROLINE +). The Spurs have lost three straight games, and while Toronto will enter the game with no players in COVID protocol as of Tuesday morning, the virus could leave San Antonio without four players — Lonnie Walker, Doug McDermott, Devontae Cacok, and Dejounte Murray.

Not only have the Raptors been great ATS lately, but they’ve also been a solid “over” play. Toronto has played over the total in seven straight games, averaging 116.5 points during that stretch to stand 20-13 O/U to date.

VanVleet has been electric of late, averaging 31 points and 8.7 assists over his last four games. Raptors head coach Nick Nurse is leaning heavily on his point guard, letting him play a league-leading 37.7 minutes per game. VanVleet’s offensive contributions are certainly key to Toronto’s success, but he also plays a prominent role defensively. The Raptors’ defensive rating without VanVleet in the lineup is just 116.1, almost 4 points worse than the league average this season.

Fred VanVleet making his strongest case yet for becoming an NBA All Star.

Toronto has the challenge of missing out on any home fan support for at least the next few weeks, as Ontario’s COVID restrictions have forced the Raptors to cut capacity at Scotiabank Arena to just 1,000 people total, including players, coaches, and operations staff. Team management further decided to cut fans completely from games for health and safety reasons.

Prior to Dec. 30, the Raptors had been operating with a maximum capacity of 10,000 spectators, which went into effect on Dec. 16. Playing without fans is something the Raptors became accustomed to last season, when the team was forced to finish the 2020-21 campaign playing its home games in Tampa, Fla., due to COVID travel restrictions implemented by the Canadian government.

“It was more normal than not, to be honest with you,” VanVleet said of the new restrictions, after a 116-108 fan-less victory over the Los Angeles Clippers on New Year’s Eve at Scotiabank Arena. “I didn’t even think about it until we were just talking about in the locker room. … I don’t know the numbers, but I would say we probably played just as much if not more ‘fan-less’ basketball than we have packed stadiums, so it is what it is.

“I’m not gonna make excuses or, you know, dwell on the challenges and adversity that we’re facing. We’ll try to get as many wins as we can in this building. Fans or no fans, we got to go out there and play basketball and do the best we can.”

Spurs also trending as over team

The loss due to COVID protocols of leading scorer Murray, averaging 17.8 points per game, likely hurts the Spurs in this one. McDermott (11.4 ppg) and Walker’s (11.2 ppg) more modest offensive contributions also shouldn’t be understated for a team that relies on offensive versatility like San Antonio does. The Spurs are 6-1 ATS, however, in their last seven games as road underdogs.