Connecticut’s coming, Maine’s back in motion, and Massachusetts meditates 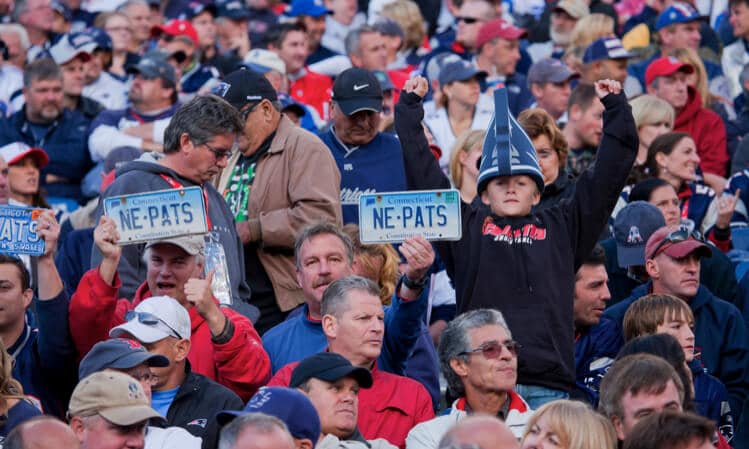 With six Patriots championships, four Red Sox titles, and one apiece for the Celtics and Bruins, New England sports fans have had very little to complain about this century.

In four of the six states that make up New England, however, sports fans who want to be able to wager on games legally do still have a little something to gripe about.

Actually, you could make a case that there’s cause for frustation in all six states. Rhode Island and New Hampshire allow mobile and brick-and-mortar sports betting, but both small states (ranked 43th and 41st in the nation in population, respectively) have an extremely limited menu of operators. In Rhode Island, which launched mobile sports wagering with in-person registration in late 2019, there’s just one app, powered by William Hill. In New Hampshire, DraftKings won the rights to a mobile betting monopoly that began in early 2020.

One app is better than none for those looking to bet sports on a regulated site, of course. But the price-shopping options available in states with customer-friendly, competitive atmospheres simply aren’t there for NH and RI gamblers.

For the region as a whole, though, things are looking up in 2021. All four other states are either inching or leaping forward, and a world in which you can place bets from your smartphone anywhere in the northeastern corner of the U.S. might not be far off.

Could Connecticut be ready in time for some football?

The Nutmeg State is a done deal. It’s just a matter of when people can start placing bets — and exactly which apps they’ll be able to use.

Connecticut’s two casino-operating tribes, the Mashantackut Pequots and the Mohegans, worked out compacts with the state in March, and the stated goal is to have real-money wagering available on the apps in time for football season.

Folks in Connecticut will have three times as many mobile operator options as their neighbors in Rhode Island and New Hampshire — but that still puts them some 18 behind New Jersey. DraftKings, which locked up a partnership with the Mashantucket tribe before legalization was certain, is assured CT access. The Mohegan betting skin will go to a Kambi-affiliated sportsbook, though the specific brand hasn’t been revealed yet. And the Connecticut Lottery is in the process of selecting its app, whittling 15 bidders down to a single victor.

There’s interesting drama to watch here concerning whether FanDuel Sportsbook can snag a seat at the table. The nationwide leader in sports betting handle is already behind its rival DK in New England thanks to the New Hampshire monopoly, and DraftKings would widen that gap substantially if FD gets frozen out of Connecticut.

On a side note, Connecticut’s legislation welcomes online casino games as well. Even though sports betting is getting the bulk of the attention, prospective operators know that iCasino is where the big revenue lies.

From veto to redo in Maine

What happened in Maine in January 2020 was the sports betting legalization equivalent of that grounder skipping between Bill Buckner’s legs. The state legislature approved a sports betting bill and sent it to Gov. Janet Mills, who unexpectedly slapped a veto on it, insisting more time was needed to explore the issue of sports betting.

She wanted more time, and more time was what she got before four new bills were introduced this spring. On April 30, state Sen. Louis Luchini led a discussion on the topic, as the interested parties weighed what it would take to structure a sensible sports gambling bill that would pass muster with the governor.

The chief points of debate include whether online operators will need to be tethered to a brick-and-mortar property (surprise, surprise, those with casinos in Maine insist they should, while those without land-based connections feel otherwise), how to address problem gambling, and whether to include an official league data mandate.

Considering how close Maine came to legalizing sports betting on the last effort, industry analysts seem optimistic that the next bill, once carefully crafted, will get across the finish line. If Luchini has his way and online sportsbooks don’t have to be tethered and the number of betting licenses is uncapped, Maine will immediately become New England’s most competitive wagering market.

With its 6.9 million residents — more than 46% of the total population of New England — Massachusetts is like Maine in terms of legislators’ willingness to try, try again. Where it differs significantly from Maine is in the difficulty consolidating ideas and reaching anything close to a consensus on what a final bill in the state should look like.

Gov. Charlie Baker has filed his own bills twice in the last three years, so at least if one of those gets through you know it isn’t going to be met with a Maine-style veto.

But the latest efforts have stalled out for now just like all the previous ones did. Sports betting revenue is not part of the House budget proposed in April — but there is still time to squeeze it in there before the budget moves along to the Senate. Still, Massachusetts feels more like a case of “sports betting is coming eventually” than “sports betting is getting done immediately.”

The same goes for Vermont and its 600,000 or so citizens. State senators are working on a bill that would authorize sports betting through the lottery and allow up to six online operators, but the issue doesn’t have the same urgency in the Green Mountain State that it does elsewhere.

Still, the more states that have legal mobile sports betting, the more their neighbors lose tax dollars to those states until they pass their own legislation, and we seem to be reaching domino-effect territory in New England. Two states have it, one more will soon, a fourth appears on track, and the two remaining states are talking about it.

Sometime in the next two or three years, the number of states in the region with sports betting could catch the number of Lombardi trophies won by the local football team.