Operator with unique betting format offering $2,000 ‘risk-free bets’ out of the gate 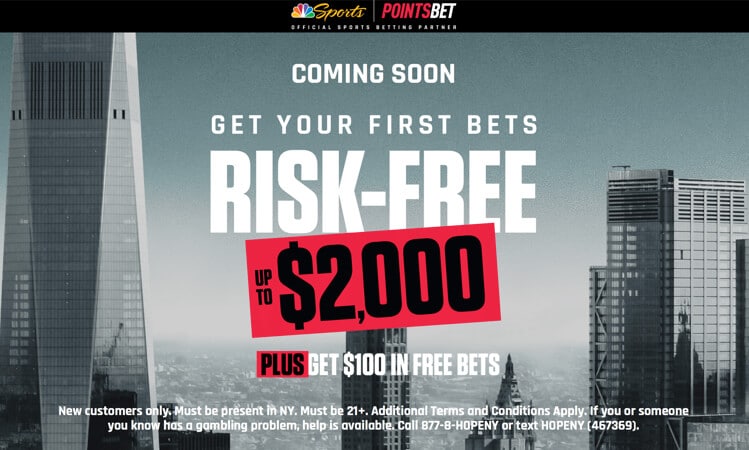 Four books — FanDuel, DraftKings, Caesars, and BetRivers — seized a coveted first-mover advantage in the Empire State on Jan. 8, with some offering $1,000 first-bet promotions. Caesars put up the gaudiest number, matching deposits up to $3,000. And on Jan. 17, BetMGM went live in New York with its own $1,000 “risk-free” promo.

PointsBet had to wait a little longer to get off the ground, and the braintrust there decided to come out swinging with a bigger sign-up special dollar figure than all but Caesars. (And Caesars has since lowered its match offer to $1,500, making PointsBet’s the biggest in the state for now.)

With the addition of New York, PointsBet is in nine states. It is poised to add a 10th market, Pennsylvania, soon.

Bets where every point matters

From the moment PointsBet launched in its first legal U.S. jurisdiction, New Jersey, in January 2019, one way the sportsbook distinguished itself from the crowd has been through “PointsBetting.”

In more traditional sports betting, the gambler picks one side of a line or the other, and the payout or cost is fixed no matter how much the wager wins or loses by. With PointsBetting, customers can risk an amount per point (or per yard, per rebound, etc., in the case of player props) and win or lose multiples of that amount.

Importantly, a limit is set on all PointsBetting wagers. For example, if a bettor takes over 53.5 points in the Super Bowl for $10 per point, the bettor also establishes a maximum amount they can win or lose. If the limit is set at 15 points, the most the bettor can win or lose is $150, regardless of whether the final score is 45-40 or 10-3.

PointsBet also offers most of the same traditional betting markets as the other books available in New York.

Signing partnerships is a Brees

Although PointsBet isn’t quite the established household name some of its competitors can claim to be, it does have a valuable partnership with a brand everyone knows. In August 2020, PointsBet and NBC Universal announced a multi-year deal to make PointsBet the official sports betting partner of NBC Sports.

That means viewers have seen PointsBet’s odds on the screen during betting segments of NBC Sports telecasts — even those airing in a state like Pennsylvania that has legal sports betting but is still awaiting PointsBet access.

PointsBet also secured retired all-time great quarterback Drew Brees as an ambassador. New Yorkers should get used to hearing Brees advising them to “live your bet life” in commercials.

While PointsBet has become popular in many states, it has also come under fire on social media at times, with bettors accusing the operator of limiting them to small bet sizes or failing to process in-game bets before the odds update. On the latter front, PointsBet introduced a new “Always On” in-game platform in January, claiming new technology allows them to process bets with “zero suspensions.”

During the first game in which the new platform was tested, “our customers experienced 100% uptime and no suspensions on in-game spread and moneyline bets, which we believe to be the first-ever result of this kind in the U.S.,” said PointsBet USA CEO Johnny Aitken. “While this test focused on the spread and moneyline markets, it also showed a glimpse into the future of where we can take our technology over time and offer a completely differentiated experience when betting in-play with PointsBet.”

If lag-free in-game betting has indeed arrived at PointsBet, that will be welcome news for New Yorkers.