Having two entries coupled, as New York racing rules require, has a negative effect on the betting 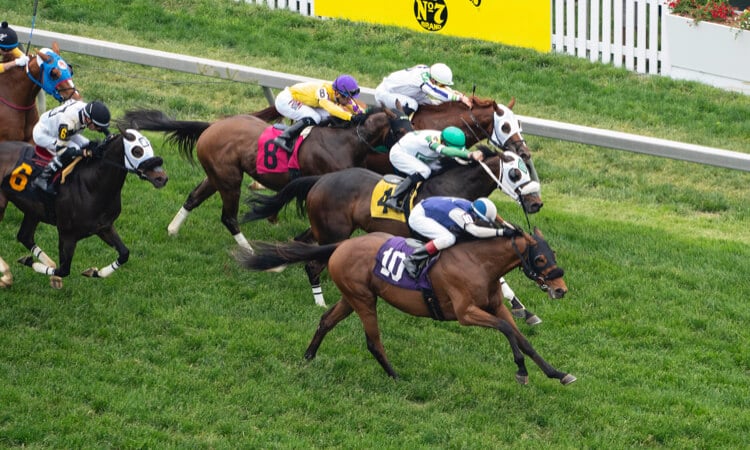 Horse racing is a sport of bloodlines — for thoroughbreds as well as humans.

Whereas the stud Tapit is known for siring Triple Crown winners, ex-jockey Robbie Davis counts three professional riders — Dylan, Jackie, and Katie — among his offspring, while one of Robbie’s old rivals, Michael McCarthy, has a son named Trevor who’s a jockey, too.

Robbie and Michael were friendly when they weren’t trying to best each other on the track, and Trevor recalls his parents telling him that he met Katie when he was 5 and she was 3. This past December, they got married.

The pair, now in their late twenties, have raced against each other hundreds of times over the past several years, primarily in the mid-Atlantic region. And they don’t cut each other any slack.

“Katie wants to beat Trevor more than anyone,” says Terry Meyocks, president and CEO of the Jockeys’ Guild, which is as close to a national union for riders as exists in a sport that’s regulated on a state-by-state basis.

Just prior to tying the knot, McCarthy and Davis decided to set up seasonal roots in New York for Aqueduct Racetrack’s winter meet. After arriving, they were informed of a decades-old State Gaming Commission rule — possibly the stupidest in the entire sport — that stood to negatively impact the financial prospects of the newlyweds and bettors alike. In the state of New York, jockeys — married or otherwise — who share a household and ride in the same race are automatically entered as a coupled entry, regardless of who their mounts are owned or trained by.

Why coupled entries are bad for betting

“It was a big surprise, and an unpleasant surprise,” says McCarthy, who runs the risk of losing business to rival jockeys who are unburdened by the prospect of being automatically coupled with their spouse in a race.

It’s worse for Davis, who, as of yet, is not quite as accomplished as her husband. “It affects me more than it affects him,” she says. “It is still a man’s sport, so if it’s conflicting, the one who has less business is the one who has to step down.”

In simple terms, when two entries are coupled, it reduces the amount of betting interests in a field by one horse. While novice bettors might appreciate the ability to bet on two horses for the price of one, more seasoned horseplayers tend to loathe the dynamic. Fewer entries in a sport that already struggles to attract robust fields shorten the odds for all horses, not just the coupled entry, thereby reducing potential payouts. And coupled entries inevitably have the effect of reducing the gross handle for a given race.

The situation gets even lousier when one half of a coupled entry scratches right before post time — which is what happened on Jan. 17 at Aqueduct, when one of McCarthy’s mounts, a horse named Amos, was a late scratch. Even though Davis and her horse, Cheatham Hill, remained in the race, all bets on the 1-1A coupled entry were refunded, leaving Davis to run only for purse money. (She finished fourth.)

Spouses aren’t the same as siblings

Coupled entries have traditionally been employed only when an owner or trainer has more than one horse in a single race, so as to prevent any sort of collusion that might favor one horse over the other. But in regard to McCarthy and Davis, racing steward Braulio Baeza Jr. recently told the Daily Racing Form that the rule’s application “has to do with joint finances,” which is why it doesn’t apply to the superstar sibling duo of Irad and Jose Ortiz, who also race at Aqueduct this time of year.

Yet if the Ortiz brothers rented a place together, the rule would apply to them, just as it would apply to a trainer and jockey who share the same household. As written, Rule 4025.10 (f) reads, “All horses trained or ridden by a spouse, parent, issue or member of a jockey’s household shall be coupled in the betting with any horse ridden by such jockey.”

But, as Davis notes, “It’s not really enforced at all when it comes to living with somebody. They don’t really ask you; they don’t really regulate it like they say the rule is. It’s not fair how hard they regulate it on us, considering we’re married. [Rooming together] is not uncommon at all. Some people are only here for three to four months, then they go to Florida or Saratoga. It’s kind of a gypsy living.”

For his part, McCarthy says he finds New York’s rule “a bit ridiculous,” but adds, “I respect the State Gaming Commission and their rules.” Still, McCarthy and Davis have enlisted the Jockeys’ Guild to try and get the rule changed.

“We’ve been talking to the stewards and lobbyists are talking to the Gaming Commission, but I’m not sure when we’ll get a response. It could be months,” says Meyocks of the Jockeys’ Guild.

Meyocks thinks the decision on whether to couple two members of a household should rest solely with the stewards, not the state.

“Fifty years ago, and me being a racing official, you could see it, but a lot’s changed in the last 50 years,” he says. “Integrity is number one for racing and the fans. But is it fair for the fans for a six-horse field to go to five betting interests? With regards to Trevor and Katie, it should be at the stewards’ discretion. They know Trevor; they know Katie. It’s all about competition.”

The New York Racing Association (NYRA) also thinks it’s high time for the coupled-entry rule to be revisited when it comes to roommates and spouses.

“NYRA would hope that this would provide an opportunity for the New York State Gaming Commission to review and modernize the area of the rulebook concerning coupled entries,” says NYRA’s communications director, Pat McKenna. “We’d welcome the conversation and believe that certain changes would prove to benefit New York racing as a whole.”