The Most Anticipated 2022 NFL Draft Picks, According to Fans

It’s spring and that means it’s time to talk… football? That’s right. You may associate football with fall, but diehard fans would say it’s a year-round obsession. Especially since right now hundreds of young college athletes are hoping for their shot at the pros.

Those same fans are likely also studying the field diligently and already placing futures bets via online sportsbooks after taking advantage of bonus codes at Caesars Casino and other casino sites.

Here at USBets.com we surveyed more than 2,000 sports fans to get their feedback about the NFL Draft and expectations for the 2022-2023 season. We also dug through the past 10 years of first round draft picks to see which teams regularly come out on top and which colleges deliver pro athletes every year. 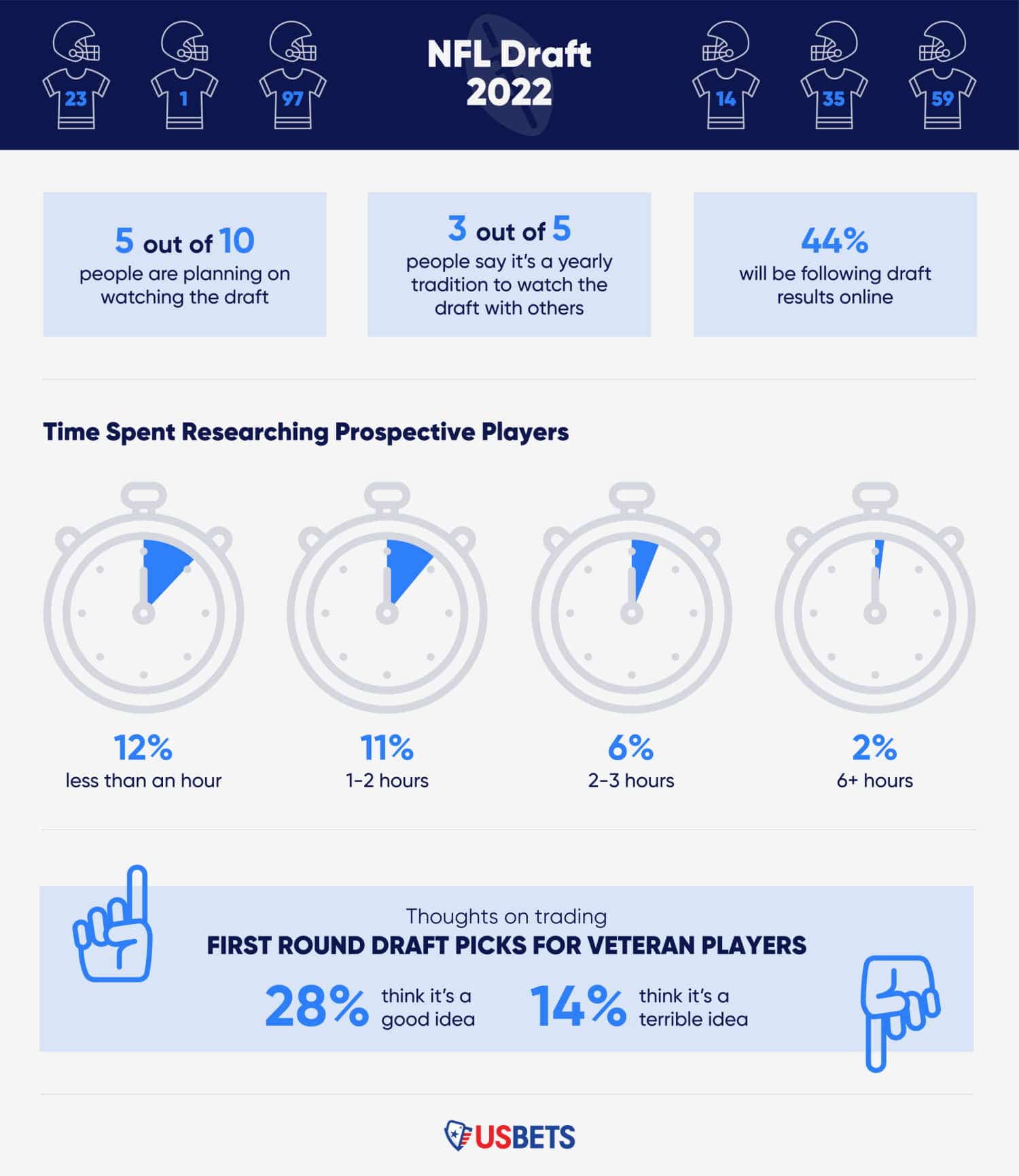 Nearly five out of ten (48%) people are planning to watch the draft live on TV this year. Three out of the five people we surveyed said it’s a tradition to watch the NFL Draft together. Of those who are not planning to tune in, 44% will still be keeping track of the draft online.

2022 Draft Picks by the Numbers

After another less than stellar season, the Jacksonville Jaguars will get the first pick of the draft. The Jaguars are expected to get about a dozen total picks including the first pick of every single round minus the fifth round (the team traded that pick to the Carolina Panthers).

Some fans would like to have a word with their teams for skipping out on the first round of the draft. Nearly 15% of fans think it’s a terrible move for teams to give up those draft picks for veteran players. But others are a lot more optimistic. Almost one out of three think it’s a good idea for teams to do that.

Football fans are optimistic the Jaguars will make off with some good talent on draft day. Fans believe the team will get the best draft picks along with the New England Patriots (20%) and the Detroit Lions (19%). If any team needs some help, it’s the Lions. Fans listed the Lions as the number one team in need of a roster shakeup this season. Similar to the Jaguars, the Lions have struggled in recent years and only won three games last season.

The New York Jets and the Giants were also tapped as teams in need of some fresh blood. Both teams will get a chance to bring in some new talent since they have the 4th and 5th pick in the draft.

Unfortunately, not every draft pick is a winning one. 18% of fans think the Rams will get the worst draft pick. The team doesn’t have a pick until the third round. Meanwhile, fans believe the Buffalo Bills, Tampa Bay Buccaneers, Cincinnati Bengals, and Kansas City Chiefs won’t fare much better.

Some teams seem to have everything ready for them on a silver platter: the perfect pick position, a good prospect, no competition. However, that doesn’t mean things can’t go wrong. Fans are a little suspect with how teams will handle the pressure. In fact, they believe the Cleveland Browns, New York Jets and Detroit Lions are most likely to fumble their draft picks. Also included in the list: the Chicago Bears. Remember the 2017 draft? That’s the year the Bears had the second pick in the first round and went with Quarterback Mitch Trubsiky. The team missed out on QB Patrick Mahomes and Deshaun Watson.

Which Colleges Produce the Most Round 1 Draft Picks? 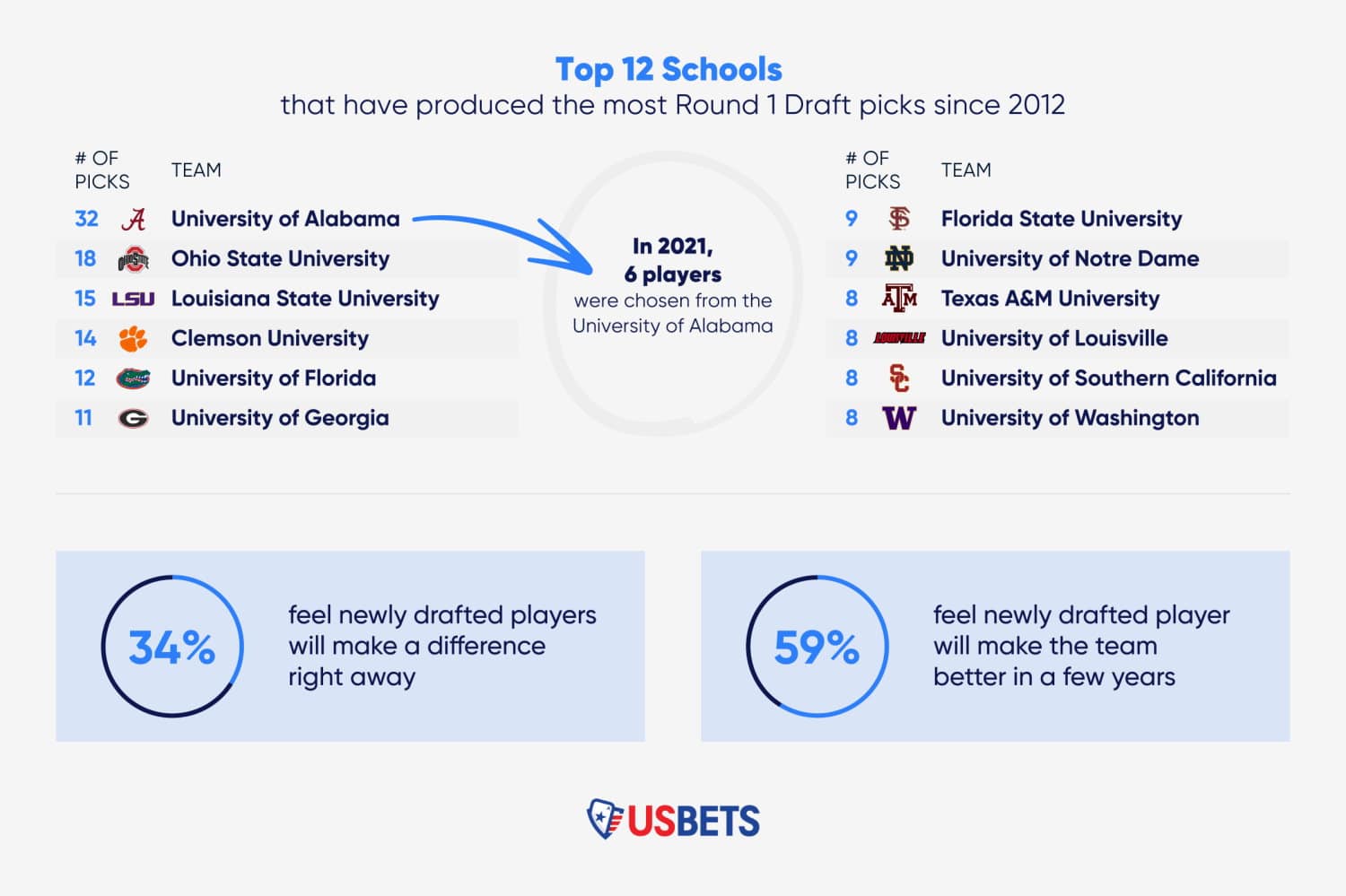 If the NFL Draft was a color it would be crimson. The Alabama Crimson Tide has crushed its opponents in the draft. Since 2012, 32 players from the University of Alabama have been first round draft picks. The school’s biggest year was 2021 when six players were chosen by pro teams.

The University of Oklahoma only had 6 picks since 2012, but it’s the only school to have had two #1 draft picks back-to-back. In 2018, the Cleveland Browns scooped up QB Baker Mayfield, and the next year the Arizona Cardinals went for QB Kyler Murray.

Meanwhile, Central Michigan University and the University of California, Berkeley have only had one round one draft pick apiece since 2012, but their athletes were each chosen first (offensive tackle Eric Fisher in 2013 & QB Jared Goff in 2016). 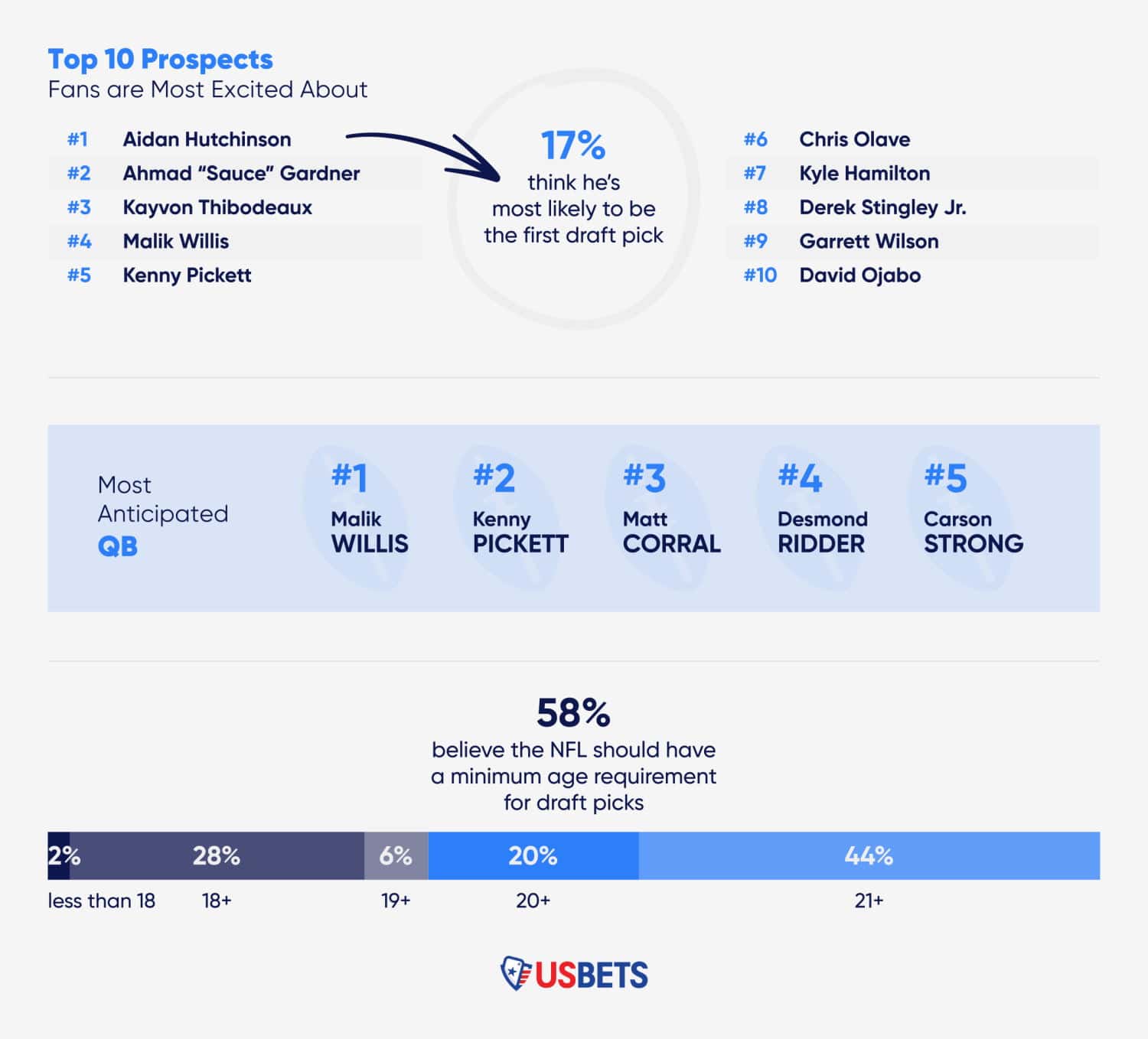 This year, a lot of fans are throwing their support behind Michigan Defensive End Aidan Hutchinson. The senior has the second highest NFL prospect grade, only behind Safety Kyle Hamilton. 17% think Hutchinson’s going to be the first draft pick.

Ahmad “Sauce” Gardner is also getting fans hyped up for football. The Cincinnati Cornerback has quite the personality. The NY Post reports Gardner was donned the nickname “Sauce” because of his swagger when he was just six-years-old by his youth football coach. He’s not shy about his talent. Just a month ahead of the draft he tweeted: “I am the best player in the draft.”

Another player that fans are looking to see on the field is David Ojabo, although it may be a bit before he’s actually on the playing field. The Michigan edge-rusher tore his Achilles in March and has been recovering ever since. The 21-year-old is from Nigeria and grew up playing European football (aka soccer) in Scotland. He only started playing American football his junior year of high school.

As for the most anticipated Quarterbacks, Liberty’s Malik Willis is topping that list. He’s followed closely behind by the University of Pittsburgh Quarterback Kenny Pickett. Pickett is one of the so-called “older” players up for consideration in this year’s draft. Pickett is 23 and will turn 24 before the NFL season starts.

Fans were surprised to learn the NFL does not have an age requirement. It requires players to wait three years after graduating from high school to be drafted, but there’s no set age before players can throw their hat, or perhaps we should say the football, into the ring. Nearly 60% of fans think there should be a minimum age requirement. More than two out of five (44%) feel like players should be 21 or older to compete in the pro league. Almost 30% were okay with players being 18 or older.

If this year’s draft is anything like last year’s, expect a lot of eyeballs on the TV screen. Last year was the third most watched draft with more than six million football fans tuning in for the big event. So, grab some popcorn and a drink, sit back, and we hope your team scores big with its draft picks.

We also used NFL data to gather information about the first round NFL picks from 2012-2021 including which player was drafted, the college they attended at the time, and the NFL team that drafted the player.

When using this data and research, please attribute by linking to this study and citing https://www.usbets.com/