Plenty of bettors are holding Ikem Ekwonu 100/1 tickets, but the Jags seem set on crushing those dreams 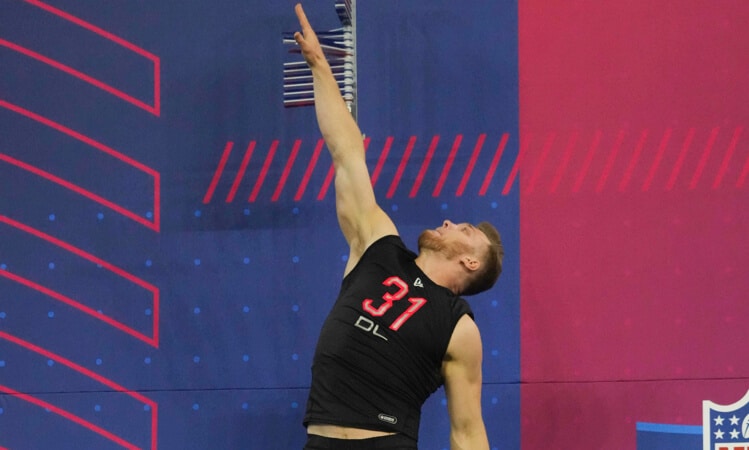 File this one under “it was fun while it lasted.”

Back in January, Dane Brugler of The Athletic published his first mock draft. In it, he had North Carolina State’s Ikem Ekwonu as the first pick off the board, headed to the Jacksonville Jaguars. This created an immediate frenzy in the sportsbook world, as the offensive lineman had not been mentioned by anyone as a No. 1 pick, and Brugler has a strong pedigree covering the NFL draft.

As a result, Ekwonu’s odds moved. A lot. They went from 100/1 to 5/1 on DraftKings, PointsBet, and FanDuel within an hour.

And since then — and right through this past weekend’s combine — Ekwonu’s odds got even shorter, as low as +120 on PointsBet. The prevailing wisdom was the Jags were either going to grab Ekwonu or Evan Neal, another offensive tackle, from the University of Alabama.

Odds to be the No. 1 overall pick after the Combine…

Actually, for bettors holding that 100/1 ticket, it was more like Black Tuesday, as the Jaguars announced they were slapping the franchise tag on Cam Robinson — an offensive lineman.

This move sent the odds for Ekwonu and Neal into the +500 range and catapulted University of Michigan edge rusher Aidan Hutchinson to the top. Tuesday morning, Hutchinson could have been had for as high as +750 on Caesars; by dinnertime, Hutchinson’s odds had fallen all the way to -250 on Caesars (he can still be had for -160 on PointsBet).

Of course, plenty can change between now and draft day April 20, but Hutchinson is the clear favorite to head to Jacksonville.

And while no sportsbook has yet opened up “Who will the No. 2 pick be?” markets, it’s worth keeping an eye on, as that’s all of a sudden going to be a free-for-all. The Detroit Lions, who hold the pick, were widely expected to take the hometown hero Hutchinson. The next-best edge rusher — University of Oregon’s Kayvon Thibodeaux — left the NFL combine early, according to the NFL Network because of “how long the day was.” That may not play so well with Dan “Kneecap Biter” Campbell.

Kayvon Thibodeaux said he would participate in everything at the combine, but just packed up his things after running the 40. Looks like he won't do positional drills after all. Huh.

In short: Expect plenty of buzz on who the Lions will be looking at — as well as plenty of trade buzz, as the Lions might be able to capitalize in a year with a weak quarterback class.

Right now, it’s hard to find a mock draft with any quarterback in the top 10, but with a handful of teams in desperate need — along with QB stocks always rising as the draft season wears on — Malik Willis of Liberty University and Kenny Pickett of the University of Pittsburgh might be worth a longshot bet when the No. 2 markets open, with either the Lions grabbing one to eventually replace Jared Goff, or with the Lions trading down.

DraftKings and FanDuel are offering odds on who will be the first QB taken, with Willis the clear favorite at -170 on FanDuel, and Pickett at +195 on both sites. Here’s the case for Pickett: He’s considered to be the more NFL-ready of the two, and if there’s a team that really likes him and is in desperate need of a QB — we’re looking at you, Carolina Panthers at No. 6, Seattle Seahawks at No. 9, or Washington Commanders at No. 11 — it wouldn’t be a total shock to see Pickett cash that +195 wager.

Overall, DraftKings and BetMGM currently have the most robust draft markets, although in the coming days all the sites should start popping with content.

Right now, DraftKings has odds for the first running back and first wide receiver off the board, with Breece Hall of Iowa State (-175) and Garrett Wilson of Ohio State (+100) the respective favorites.

Looking at a collection of mock drafts, Hall seems to be sitting pretty, with only Michigan State’s Kenneth Walker III (+150) as a potential threat right now. On the wideout side, however, things are a little more wide open, with Drake London of USC (+150) as Wilson’s most notable challenge. For a little more of a longshot, Treylon Burks of the University of Arkansas is at +700. His stock was rising, but his 40-yard dash at the combine wasn’t stellar, so … well, who knows.

I can’t even explain how much Treylon Burks’ 40 time doesn’t matter.

Both DraftKings and BetMGM are offering over/under markets on the draft slot for a handful of players. Perhaps most interesting is Kyle Hamilton, the safety out of Notre Dame. His over/under is 6.5, with the under at -105 on both sites. There is certainly a world in which he ends up going to the Lions with the No. 2 pick, as currently predicted by Todd McShay of ESPN.