Justin Fields? Mac Jones? No one knows, and it shows 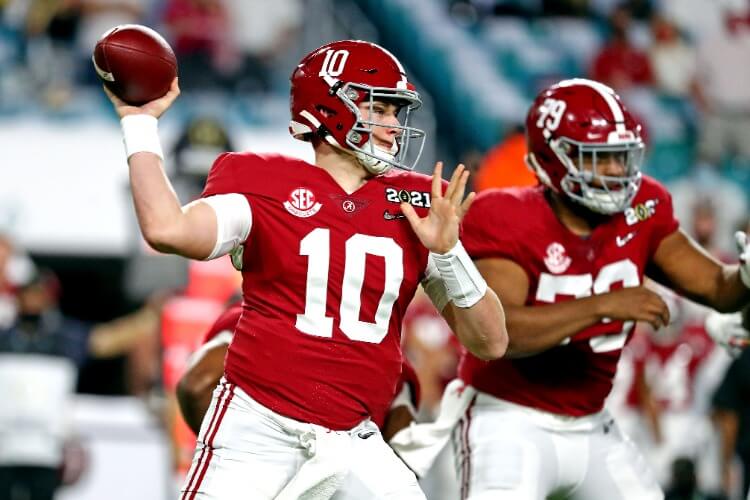 The oft-used phrase “life comes at you fast” was made popular, somewhat surprisingly, by a series of commercials for Nationwide Insurance in 2006. Who knew, right?

Well, when it comes to betting NFL draft props, life does indeed come at you fast, for the bettors as well as the bookmakers.

Case in point: Last Thursday morning Mac Jones of the University of Alabama was the overwhelming favorite to be the third quarterback off the board and third player taken overall, headed to the San Francisco 49ers. His odds got as high as -305 at some sportsbooks and had settled in the -250 range. It had been that way since ESPN’s Adam Schefter said he would be “shocked” if the Niners didn’t take Jones. He said this back on his March 30 podcast. And when Schefter talks, people listen.

🎙 Breaking down the massive draft shake up, and what SF is thinking at No. 3.

🎙 Giants’ CB @AdoreeKnows on going from the Titans to the Giants.

And then after more than two weeks of Jones dominating the market … whipsaw. The 49ers had sent people — including head coach Kyle Shanahan — to witness the second pro day for Ohio State’s Justin Fields on April 14. The next day, Jones dropped to -150 on DraftKings to be the pick at No. 3. Then suddenly, Fields lapped him. By early afternoon, Jones had dropped to +100, Fields -121 at DraftKings.

I spoke too soon.

Justin Fields is now the betting favorite at -121. Massive swing in the market.

But many other sportsbooks were slow to react to DraftKings’ abrupt pricing change. At BetMGM, for instance, Fields remained priced at +190 to be the 49ers’ pick. Apparently, many bettors jumped on that price, as he was bet down to -110 within a few clicks of the “refresh” button.

And as of this writing, a week later? It suddenly swung back the other way on DraftKings, with Jones back at a -125 favorite to go third, and Fields the +125 underdog. None of the other books followed at first, with all of them leaving Fields as the favorite. At William Hill, for example, Fields remained at -115, Jones at +110.

And with the difference in pricing, you can be sure plenty of bettors were buying exactly what Nationwide was selling: insurance. (And on that score, Trey Lance is +400 on DraftKings to be the third player selected, for any nervous nellies out there.)

And then … and then the line moved again on DraftKings before the next section of this story could be written. Jones to -110, Fields to +110.

And the other books followed.

“There’s nothing else to go by other than the beat writers and such,” Johnny Avello, the director of DraftKings sportsbook, told USBets shortly after the original move to bump Fields to the favorite at No. 3. “It’s not about who’s the best player, it’s about who needs what. So we’re doing the same thing you’re doing — using your intuition and looking at the mock drafts out there. We simply have to respect the opinions of all the experts. The NFL draft is so tough.”

“It’s a difficult market for us to make money on,” Avello said. “It’s about knowledge, about teams putting themselves in particular positions to make their picks. As we move closer to draft day, I’m sure we’ll see more movement.”

And like Nostradamus, Avello proved himself right a week later when Jones once again became the favorite.

Avello also said there is a monkey-see, monkey-do aspect to other books moving their lines in the NFL draft prop market. He said it’s not always because a big bet or sharp money comes in; oftentimes in the NFL draft market, it’s simply because that’s where the winds are blowing.

“If we weren’t first to move the line [on Fields and Jones], I think we would’ve responded to the market, so to speak, but maybe not based on just one operator only,” he said. “But this was a market move. That’s where we are now, but who knows where we’re going to be in two weeks.”

Or one week. Or, probably, moments after this story publishes.

This is not the Pitts

Of course, the drama surrounding the 49ers’ pick at No. 3 is not the only movement in the NFL prop market.

For instance, University of Florida tight end Kyle Pitts has seen his ultimate landing spot dance across the sportsbooks.

And while most books are starting to coalesce around consensus at most spots, there are still some pretty wild differences in pricing.

University of Alabama cornerback Patrick Surtain II is +200 at BetMGM to go to the Dallas Cowboys at the No. 10 pick. But he’s all the way down at +100 at FOX Bet. Differences like these — while increasingly rare as the draft draws closer — are still out there.

But true arbitrage opportunities — which were plentiful in the beginning — are getting tougher to find as the books sharpen their lines.

Pick your team and position

Right now, FOX Bet, DraftKings, and BetMGM have the most robust draft markets, with FanDuel, WynnBet, PointsBet, and a handful of others offering a bit less action.

Paying attention to detail may prove to be a boon at BetMGM and DraftKings, as they’re the only two online books offering “position of team pick.”

This is where reading those beat reporter stories, paying attention to sharp mock drafters, can really pay off.

For instance, on BetMGM the Falcons are at +140 to take a quarterback and +160 to take a tight end (obviously Pitts). But there has been a lot of scuttlebutt about Atlanta dropping down, and if the Falcons do that, the odds explode. An offensive lineman or wide receiver? Both at +1200. A linebacker at +2000, and so forth.

Clearly, a little information there can go a long way.

Another wager along these lines — though clearly a longshot — is for the Tampa Bay Buccaneers to grab a quarterback with their first pick. That’s priced at +2500 on BetMGM, and the player would almost certainly be Stanford quarterback Davis Mills. There have been rumors that the Bucs could grab him here, and so at 25-to-1, it seems like a decent enough shot in the dark. After all, the Bucs’ current quarterback is 784 years old in NFL years. He’s like a biblical character.

Of course, all the best bets and craziest longshots can get smashed to smithereens on draft night, as trades oftentimes turn things upside down. One note of caution — in years past, once the draft starts, the books close up shop. Life may still come at you fast, but reacting will be a moot point.