Caesars, FanDuel, DraftKings may have inside track on NFL game spots 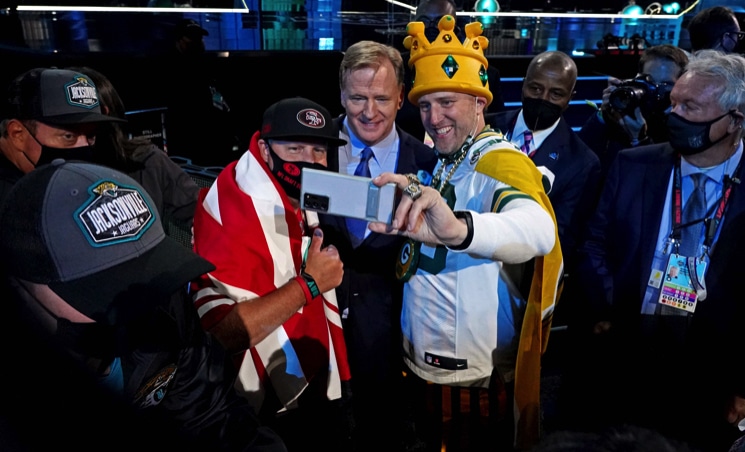 Just three years after a U.S. Supreme Court ruling opened the door for any state to offer Las Vegas-style sports betting, the NFL is taking yet another step in favor of the gambling its leading executives once claimed could ruin their sport.

According to the Sports Business Journal, “The NFL will allow TV networks to sell up to six ad spots per game to sportsbooks this season, a dramatic turnaround for a league that was the last to open the category to sponsors. Games can include one spot per quarter, plus one in pregame and one at halftime.”

The ads, to be sold by Fox, CBS, NBC, and ESPN, are available to official NFL sponsors Caesars, FanDuel, and DraftKings, as well as “approved sportsbook operators.” So far, the latter category includes FOX Bet, BetMGM, PointsBet, and WynnBet, according to the SBJ. Potential operators must agree to purchase official NFL data — the successor to the poorly marketed “integrity fees” sought by the leagues two years ago in an effort to cash in directly on the brave new world of legal, regulated sports betting across the U.S.

Of course, not all NFL matchups are created equal on this front.

Some games will offer less appeal

In NFC West games involving the Los Angeles Rams and San Francisco 49ers, there would seem to be little to be gained from pitching to a pair of fan bases than can’t legally wager on the games in California. All NFL games can be seen on some sort of a national media platform, however, and diehard gamblers are liable to watch any game that features any of their bets.

Other teams that play in states which haven’t launched legal sports betting yet include the Dolphins, Buccaneers, and Jaguars in Florida (though the Seminole Tribe may offer sports betting in Florida by midseason), plus the Chiefs, Vikings, Packers, Falcons, Cowboys, Texans, Bengals, and Browns. Meanwhile, sports betting will soon be available in-state for fans of the Arizona Cardinals and New Orleans Saints.

.@PointsBet has added another former star athlete to its roster (with @NBCSports), signing former QB Drew Brees to an exclusive multiyear contract as a brand ambassador.

In several cases, teams play home games in a stadium bordering a sports betting state — making an ad pitch in those games more appealing. The national scope of the potential bidders also should leave the networks with no shortage of interest in the designated ad spots.

In November 2012, NFL Commissioner Roger Goodell was deposed in the so-called “Christie I” case, in which the state of New Jersey and its thoroughbred horsemen’s association were sued by the NFL and four other sports organizations in a bid to keep the state from implementing its new sports betting law.

During the deposition, Goodell repeatedly predicted that the leagues would prevail in court. Asked if the league had contingency plans in place should New Jersey win the case, Goodell replied, “No, we don’t, because we don’t believe it will be lawful. It’s not now, and it won’t be in the future.”

As for legalization of sports betting beyond Nevada, Goodell said, “It’s a very strongly held view in the NFL, it has been for decades, that the threat that gambling could occur in the NFL or fixing of games or that any outcome could be influenced by the outside could be very damaging to the NFL and be very difficult to ever recover from.”

Goodell added that it was “common sense” that widespread legal sports betting “would greatly increase the likelihood that the allegiance of certain fans will be turned from teams, players, and high-level athletic competition, toward an interest first and foremost in winning a bet.”

But now Goodell and his colleagues clearly have a different sentiment.

Who is the target for these ads?

NFL Chief Strategy Officer Chris Halpin told the SBJ that the first wave of interest from viewers will be those transitioning from gambling illegally to the legal markets.

“The next waves will be casual and what we call aspiring bettors, who are people who would never bet illegally but want to bet on sports,” Halpin said. “And there are going to be multiple additional steps in this process, and the markets are going to continue to grow.”

The gold mine that sports betting is for the NFL continues to exasperate Meadowlands Racetrack owner Jeff Gural, who bankrolled much of the legal cost of the six-year fight that culminated with the Supreme Court victory.

“This may be the only time in history when the loser of the lawsuit is the biggest winner,” Gural said at last week’s Racing and Gaming Conference in Saratoga Springs, N.Y. “That was the dumbest thing I have ever seen.”