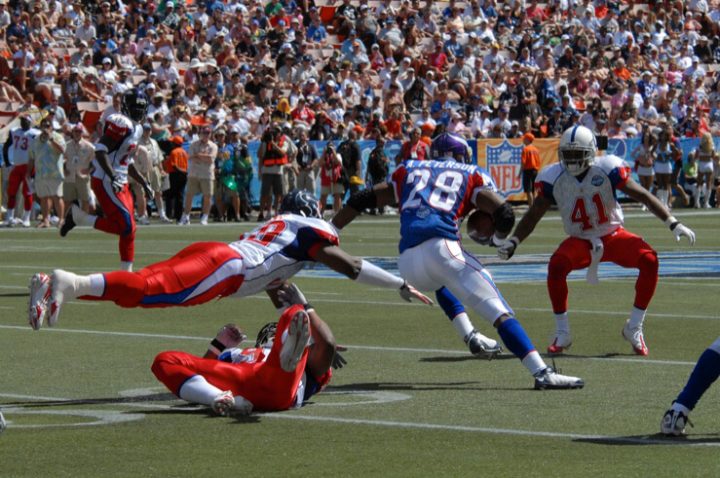 Fret all you want about concussions, players kneeling, nobody knowing what a catch is, and any other controversial topic that some will claim is chipping away at the NFL’s audience. The reality is that football is still king in America, and it isn’t close. Anyone who works at a sports betting window can tell you that.

We’re just ten days from the first NFL preseason game, and the national pastimes that are fantasy football mock drafts and analyzing the futures odds are well underway. NFL season isn’t quite here, but NFL gambling season definitely is.

We got our hands on the futures lines from both Westgate Las Vegas Superbook and Meadowlands Racetrack’s FanDuel Sportsbook in New Jersey, and there’s plenty to take note of already.

At Westgate, six teams have seen their odds to win the Super Bowl close substantially since the opening lines were released on January 7:

Coming off a three-win season, the Giants bets clearly owe a lot to the Saquon Barkley effect. Deem it a reach to take a running back second overall in the draft if you like, but the public is easily swayed by the addition of a high-upside skill-position player.

The Rams movement is more likely fueled by smart money as, coming off an 11-win campaign and their first NFC West title in 14 years, L.A. added cornerbacks Marcus Peters and Aqib Talib and wideout Brandin Cooks. If anything, Westgate’s opening line of 20/1 is the surprise here.

Meanwhile, bettors are high on the entire AFC West, and it doesn’t seem folks are worried about Patrick Mahomes taking over as QB of the Chiefs. In fact, the whole wagering world seems to be anti Alex Smith, as evidenced by …

The championship odds for quite a few teams have widened in the last six months, most notably:

Smith takes over as the signal caller in D.C., and it sure looks like people don’t believe he’s an upgrade over Kirk Cousins. The same goes from the combination of well-traveled Sam Bradford and rookie Josh Rosen in Arizona.

What do all of the above teams have in common? Every single one of them is in the NFC. So the bettors are saying they think the Super Bowl champ is more likely to come out of the AFC, while the three favorites in the NFC — the Eagles, Vikings, and Rams — are each listed at 10/1 to win the Super Bowl in Atlanta on February 3, 2019, and 5/1 to get there.

A little comparison shopping goes a long way, and there are some intriguing price discrepancies to pounce on if you have the option of placing a bet at either Westgate or Meadowlands.

Many of the differences are minor. For example, the New England Patriots are +600 in Jersey and +650 in Vegas, while the Philadelphia Eagles are +900 near home and +1000 out west. (For what it’s worth, Mark Wahlberg has already placed bets on both of those teams, plus the Cleveland Browns. We’re not entirely sure the star of The Gambler knows what he’s doing when it comes to sports betting. But with an estimated net worth of $225 million, he can afford to be wrong.)

There are some teams, however, that you’d be foolish to bet on at Westgate over Meadowlands, or vice versa. Here are some of the widest gaps:

New Jersey bettors will be pleased to know that by the time the NFL season rolls around, there’s a strong likelihood that a FanDuel branded online sports betting site will be operational, enabling at-home and on-the-go futures wagering.

Westgate has also posted win totals for all 32 teams. A few notable figures:

Sports Betting Is Coming To Mississippi, Just Not As Soon As We Thought

In A Slow Stretch For Sports, Meadowlands Already Has Taken $3.5 Million In Bets