When It Comes To NFL Overtime, There’s Got To Be A Bettor Way

Sports gamblers and oddsmakers offer their ideas for reinventing OT 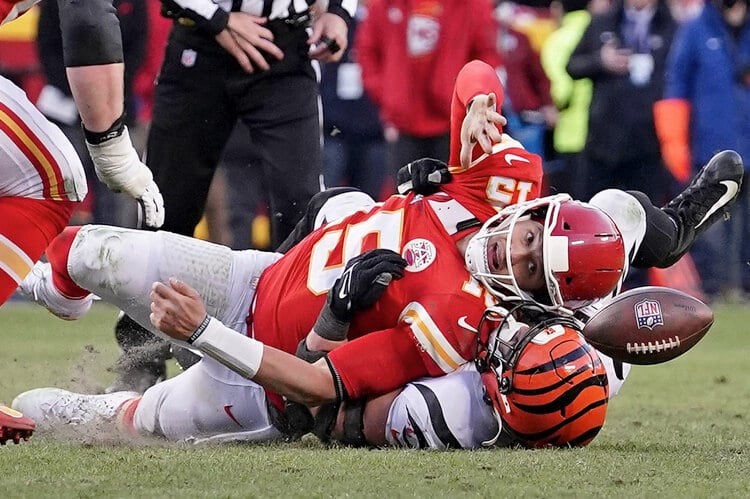 Sports bettors and NFL fans alike could have been forgiven for reacting that way when the Kansas City Chiefs won the coin toss prior to overtime in Sunday’s AFC championship game. After all, Pat Mahomes & Co. won a scintillating shootout against the Bills the weekend before by winning the coin toss and marching down the field to score a touchdown in overtime without Buffalo ever getting the ball — an outcome that led many observers to wonder whether the NFL should reconsider its overtime rules.

To be fair, the current format — where a first-possession touchdown wins, but the other team gets a shot on offense if the opponent kicks a mere field goal — represents a vast improvement over the pure sudden-death format of yore, in which a three-pointer on the first possession could determine the winner.

As it happened, this past Sunday’s result escaped controversy after Mahomes threw an interception on the first possession of overtime and the Bengals proceeded to kick a field goal to punch their ticket to the Super Bowl. But it will be a long time before some people forget about the Bills-Chiefs game, which raises the question: How, if at all, should the NFL reimagine its overtime rules in a way that takes into account the desires of various constituents — including the gamblers and sportsbooks at least partly responsible for the game’s popularity, particularly in the era of legalized betting explosion?

Vonn Bell with a massive interception for the Bengals in overtime. pic.twitter.com/5RLbwLeCgC

“The way they have it now, it’s just terrible,” professional sports bettor Bill Krackomberger told US Bets. “You can’t decide a great football game like that on a coin toss.

“Sometimes these guys who make the rules are too close to the sun. You have to be street smart and think about some other viewpoints. There has to be an equal chance for both teams to score, and that would be each team getting the ball at least one time. I understand college, the way they do it. Or maybe if you get a touchdown, you’re forced to go for two, but each team should definitely get the ball. And if they both scored a touchdown, you do it again.

“I don’t know how it would benefit the NFL, but it would benefit the sportsbooks, absolutely. The live wagering that’s come to the United States is phenomenal. … Anything that makes the game go longer is a better opportunity for some of the sharper guys who are betting live and probably worse for Joe Public, who is betting into a market he doesn’t know much about.”

So if Krackomberger — who’s based in Vegas, but was in Atlantic City for the conference championship games — and his wagering partners had carte blanche, what sort of overtime rules would they implement?

“To make it as fair as possible, both teams start at their own 10-yard line, play a full quarter, and you have to go for two points [on touchdowns]. Just puts an interesting twist on the scoring. Field goals are still an option, too.”

Rufus Peabody, a peer of Krackomberger’s in the pro gambling realm, favors a quirkier approach.

“I think someone else came up with this idea, but it would be sudden death with possession determined by bid,” he explained. “Each team would submit a bid for starting field position and the team with the lowest number gets the ball starting at that yard line. If both submit 1-yard line, they have to submit a down they’d be OK starting on. Highest gets the ball on that down.”

Captain Jack Andrews (that’s a pseudonym) — who partnered with Peabody to create Unabated, a website dedicated to educating sports bettors — decided to address the question from a couple of different angles.

“If sportsbooks could rewrite NFL OT, they’d make it more of a coin flip — literally,” said Andrews, tongue planted firmly in cheek. “In fact, maybe it would just be decided by best-of-seven coin-flipping. After all, they’d have exactly what they want: more betting opportunities, decided quickly, and less chance of losing.

A pair of Nevada-based sportsbook executives — Jay Kornegay with the Westgate SuperBook and Robert Kowalski of Baldini’s and ZenSports — are fond of the NFL mimicking college football’s overtime system, where both teams are guaranteed offensive opportunities and are incentivized (and eventually required) to go for two points after a touchdown.

“I think the NCAA format is best overall and gives an equal path to victory for each club,” said Kowalski, while Kornegay added, “I know some of my colleagues would disagree with this, but I’ve always been in favor of the college format. I don’t think we have to overthink it with crazy ideas.”

But at least one analyst thinks the NFL should just leave things be, more or less.

“From a sportsbook’s perspective, we are looking for as much certainty as possible,” said Sam Garriock, a senior trader for PointsBet. “Ideally, for modeling purposes, we want the game to look as much like the rest of the game as is possible. For example, were the game to be played from the 2-yard line in a penalty shootout style — similar to the college rule once it goes to 3 OT — you are now simply handicapping red-zone offenses against red-zone defenses.

“The ‘fairest’ way to resolve things is the existing rule, but removing the initial walk-off touchdown, instead guaranteeing the other team a possession. This removes a bunch of excitement from the game — and with it, potentially some handle — and because it would only make OT the slightest bit easier to model, we think the current rule works just fine for us.”