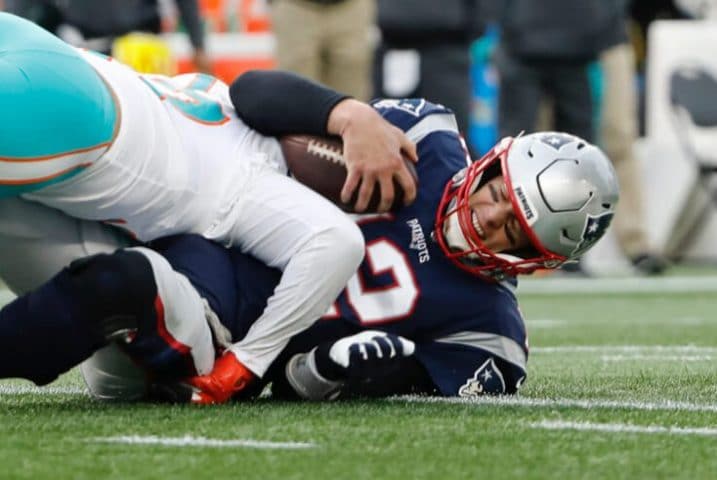 The NFL regular season is over. Seventeen weeks of football are in the books. Raise your hand if you nailed these predictions:

Long story short: The NFL is a crazy league where every “sure thing” is ultimately a gamble. And there’s still plenty of time to gamble, with the first of four postseason weekends on tap.

Surveying the spreads at FanDuel Sportsbook, DraftKings Sportsbook, and FOX Bet, all available in Pennsylvania and New Jersey, among other states, here are the consensus lines as of Monday for this weekend’s four games:

And here are the best moneyline odds we found on each team:

Do with your money what you think is best, but +188 sure is intriguing on a Titans team that’s been truly elite the second half of the season against a Patriots team that at this point is largely favored because of its history and mythology.

Here are the best available payouts for conference and Super Bowl titles on each team as of Monday:

It’s certainly notable that the Ravens are a favorite against the field in the AFC to make it to the Super Bowl in Miami. The Chiefs’ Super Bowl odds have dropped significantly in the past couple of weeks, from +1100 to +450, and the Saints have much shorter odds than the Packers despite needing to win one more game.

At DraftKings, you can already bet on the Super Bowl MVP (labeled the “NFL Championship” MVP because these sites have to pretend the copyrighted words “Super Bowl” don’t exist). The shortest odds belong to Jackson (+300), Jimmy Garoppolo (+500), Mahomes (+550), and Drew Brees (+700). The first non-QB on the list is Michael Thomas (+1600). And you might want to stay away from Carson Wentz, who’s +3000 even though you can get +4000 on his team to win the Super Bowl.

FanDuel lists a prop for the conference to win the Super Bowl — AFC is -138, NFC +114. And you can also wager on the winning division, but think before you bet. For example, the NFC South is +550 and is solely represented in the postseason by the Saints, who pay +600. On the other hand, why bet the Ravens at +225 to win the Super Bowl when you can bet on any AFC North team to win it at +230?

A few season-long win-totals bets came down to the final week. There were the Titans and Broncos:

And then there were the Dolphins, listed at 4½ wins before the season began, which looked like a steal on the “under” when they started trading their best players for draft picks, and seemed an absolute lock when they dug themselves an 0-7 hole. With the win over the Pats, though, Miami finished a remarkable 5-11.

And by upsetting New England, the Fish made the sportsbooks quite happy. They spoiled countless parlays whose odds were marginally boosted by the Pats on the moneyline, and a few big bettors risked a lot to win a little on the Patriots.

In other notable Week 17 gambling news, Derrick Henry’s 211-yard explosion (after missing Week 16) pushed him past Nick Chubb and Christian McCaffrey to win the rushing title, a 17/1 prop before the season.

And the Offensive Rookie of the Year award remains uncertain — and an interesting bet if any of the books choose to put it back up. Raiders RB Josh Jacobs was the leader in the clubhouse the last several weeks, but he missed the last two games due to injury and was surpassed in all-purpose yards by Miles Sanders, who, because he plays for the Eagles, suffered an injury of his own down the stretch. Cardinals QB Kyler Murray had a strong final game, as did Titans WR A.J. Brown. The season is over, but this award isn’t settled yet.