This Week’s Hottest Bets In The NHL: Canucks Rallying After Big Changes 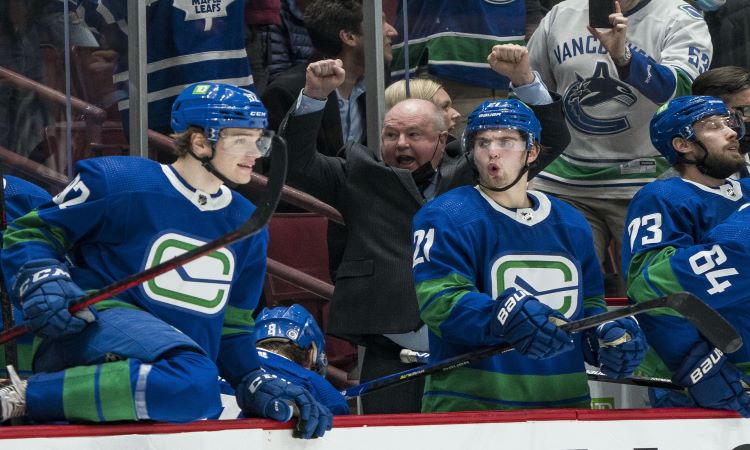 Each week, we’ll take a look at some of the hottest and coldest bets around the NHL, identify the team with the softest schedule, and shed some light on some interesting betting trends.

Betting on the NHL is hard enough under normal circumstances, but with COVID-19 wreaking havoc on NHL lineups and the schedule once again, it’s making it even more difficult for bettors. The Calgary Flames and Carolina Hurricanes have been the hardest hit recently by the pandemic, with both teams losing multiple players to COVID protocols. Calgary’s outbreak is so bad, it forced the NHL to postpone its games  through Dec. 18.

The good news, however, for bettors, whether in the U.S. or Canada, is there’s still plenty of NHL action to consider, so let’s take a look at some betting angles.

Following a miserable 8-15-2 start to the season, the Canucks have posted five straight wins — all at home in Vancouver — after firing their head coach and general manager. With Bruce Boudreau now behind the bench, the team appears re-energized and the once-sour fan base is rallying behind the team and, specifically, the new head coach. Just take a listen.

And here come the “Bruce there it is” chants pic.twitter.com/IHMqeWIDSt

Suddenly, the Canucks were just four points back of a playoff spot in the Western Conference heading into action Wednesday night, and their top players are breaking out of their season-long funks. Winger Brock Boeser has come alive, posting three goals and two assists during the winning streak. He had just 10 points in his first 22 games.

The Canucks hit the road to play the San Jose Sharks (15-13-1) Thursday before returning home for contests against the Toronto Maple Leafs (20-8-2) and lowly Arizona Coyotes (5-20-2) over the weekend. But bettors beware: The Canucks are just 2-8 in their last 10 trips to San Jose, and the home team is 10-4 in the last 14 meetings between the teams.

Edmonton was thumped, 5-1, by Toronto on Tuesday night and has now dropped six straight games. Five of those six losses have been at home, causing some serious frustration among Oilers fans.

someone just threw an oilers jersey on the ice in edmonton *while the game was going on* pic.twitter.com/KNhht9Fnzr

Edmonton simply can’t find the back of the net lately, posting only six goals while allowing 20 markers in its last five games. The Oilers, who haven’t even held a lead in any of the games during the losing streak, will have to find a way to right the ship without head coach Dave Tippett. He’s tested positive for COVID-19 and will likely not rejoin the club until after Christmas.

Expansion teams are always difficult for oddsmakers to handicap early in the season, and bettors who have been riding the over with the Kraken all season have been profiting. Seattle is 18-8-2 O/U to date, mostly because of its defensive woes. The team is allowing an average of 3.5 goals per game (28th in the league) despite attempting to focus in the expansion draft on defense and goaltending.

Goaltender Philip Grubauer, who signed a six-year, $35.4 million deal as a free agent after posting an impressive .922 save percentage and 1.95 goals-against average with the Colorado Avalanche last year, has posted a .884 save percentage and 3.25 GAA in 22 games so far this year. His backup, Chris Driedger, has already spent two stints on injured reserve, limiting him to just six games.

Seattle’s next three games are all against high-scoring opponents. The Anaheim Ducks, Maple Leafs, and Oilers (despite their recent scoring woes as mentioned above) all rank in the top 10 in scoring this year. The over is 14-5 in Seattle’s last 19 contests overall.

The Kings are 8-18-1 O/U and have played under the total in four straight games. A combination of a lack of scoring and excellent goaltending has this team playing under totals consistently to this point. Los Angeles ranks 25th in goals scored, averaging just 2.7 per game, while the goaltending duo of veteran Jonathan Quick and Cal Petersen boast a combined .920 save percentage, the eighth-best mark in the NHL. Quick has been especially hot of late, allowing just five goals in his last four games.

You from your couch: "Psh, yeah I could do that, doesn't even look hard." pic.twitter.com/rwfq3FadM0

The Kings play three road games this week against tough Eastern Conference foes: the Florida Panthers, Carolina Hurricanes, and Washington Capitals. The under is 5-0-1 in the Kings’ last six road games.

If you’re a puckline bettor, hopefully you’ve been riding the surprising Ducks all season long. Anaheim (16-9-5 SU) has posted an outstanding 25-5 record on the puckline to date because of its ability to keep games close. Many predicted more of a rebuild year for the Ducks, but the emergence of winger Troy Terry (17 goals, 11 assists in 29 games) and another solid year from goalie John Gibson (.918 save%, 2.57 GAA) have them sitting in first place in the Pacific Division.

"I am going to do all of the moves in one shift"- Troy Terry pic.twitter.com/QErO8ZriGT

Anaheim’s chances of keeping the good times rolling seem favorable over its next three games, with clashes against Seattle, Arizona, and struggling Edmonton on the schedule. The Ducks, who are -150 on the moneyline Thursday night against Seattle on BCLC’s PlayNow site, are 6-0 in their last six games when listed as a favorite.

The schedule couldn’t get any easier for the Boston Bruins this week, as they visit the New York Islanders, Montreal Canadiens, and Ottawa Senators — three of the four worst teams in the NHL standings. Veteran netminder Tuukka Rask is finally back practicing with the team after suffering a torn hip labrum, which could provide an additional boost. It’s important to note the Bruins are 6-1 in their last seven road games, but captain Patrice Bergeron has joined star forward Brad Marchand in COVID protocol, so bettors beware.

"Other guys that get the opportunity will have to step up a little bit," coach Bruce Cassidy said. "https://t.co/jLS1AeOpmU