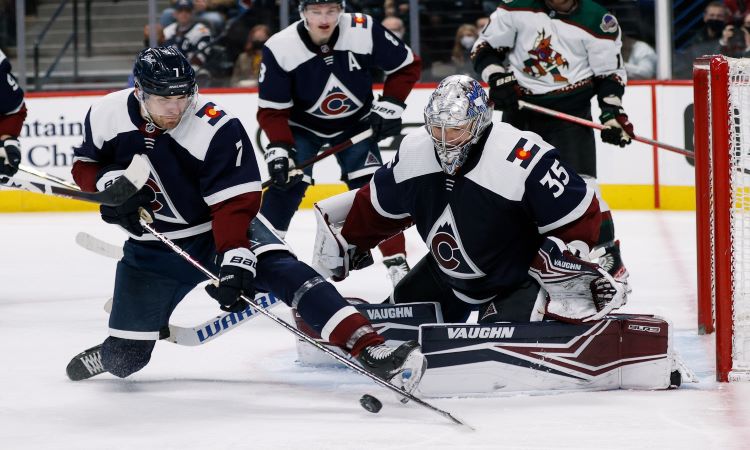 Each week, we’ll take a look at some of the hottest and coldest bets around the NHL, identify the team with the softest schedule, and shed some light on some interesting sports betting trends.

All good things must come to an end. Shockingly, the lowly Arizona Coyotes (11-29-4) halted the Avalanche’s home win streak at 18 games Tuesday night with a 3-2 shootout victory, which amounted to Colorado’s first loss in 10 contests overall. Colorado now heads into the All-Star break with an impressive 32-8-4 record. It has collected at least a point in each of its last 17 games.

“Whoever it was going to end against, it was going to suck. Losing sucks,” Avs captain Gabriel Landeskog was quoted saying after the loss to Arizona, with a reference to the high that winning brings.

Gabriel Landeskog: "Once you start winning — I don't do a lot of drugs — but I can imagine it's like a drug."

The amazing run has vaulted the Avalanche to the second-best record in the league, while they tied the NHL record for wins in the month of January with 15. It’ll be interesting to see if the All-Star break cools off this red-hot team, or if it just continues to steamroll opponents in the second half.

With a 7-1 thrashing at the hands of the Toronto Maple Leafs Tuesday night, the Devils enter the All-Star break losers of six straight games with a 15-25-5 record. This team has major issues in goal, as the top two goaltenders on the depth chart to start the season — Mackenzie Blackwood (heel) and Jonathan Bernier (hip) — are both injured. New Jersey has been forced to use six different goalies this season and is allowing 3.5 goals per game, which ranks 29th in the NHL.

With opposing teams filling the net at a high rate, the Devils have been a solid “over” play to this point, posting a 24-18-3 over/under record. A favorable schedule against two other struggling teams — Ottawa and Montreal — after the All-Star break will provide a good opportunity to turn things around. But, for now, the team can blame these Lunar New Year warm-up jerseys for its recent dud against Toronto.

These jerseys bringing the heat in warmups. pic.twitter.com/Oj876STAXX

The Panthers have played over the total in three straight games and five of their last six to stand at 28-18-1 o/u this season. Averaging 4.1 goals per game overall, Florida is netting nearly 4.4 goals per game at home, where the Panthers are an outstanding 23-3 straight-up this season. Forward Jonathan Huberdeau has 43 points (9 goals, 34 assists) in those 26 home games and is still a point-per-game player on the road with 21 points (8 goals, 13 assists) in 21 contests. Some sportsbooks have been adjusting Florida’s totals to as high as seven to compensate for its potent offense over the past couple weeks, so finding a reasonable total could be tricky moving forward if the Panthers continue to light the lamp.

The Kings continue to be a great under play, posting a 17-28-1 O/U record to this point. The under has also cashed in 11 of the team’s last 16 road games and is 14-6 in the Kings’ last 20 games as posted favorites. Los Angeles has collected points in five straight games thanks to a surge in offense from Trevor Moore. The fourth-year forward collected four goals and 12 assists for 16 points in January, the most in a single month by a Kings player since Anze Kopitar (20 points) in 2018. The Kings wrap up a six-game road trip Wednesday in Detroit before the All-Star break.

The Ducks remain the best puckline bet in the NHL with a 32-16 record against the spread. Anaheim wrapped up an impressive five-game road trip by claiming eight of a possible 10 points. It now gets a break until Feb. 11, when the Ducks host the lowly Seattle Kraken. Goaltender John Gibson and forward Troy Terry have been named All-Stars this year, but everyone continues to rave about the awesome skill set of Trevor Zegras. The 20-year-old wowed the crowd with an incredible lacrosse-style goal last Thursday against the Montreal Canadiens.

Trevor Zegras is at it again 😱 #SCtop10 @AnaheimDucks pic.twitter.com/hivq6F2qwj

One of the surprise teams to this point, the Ducks will have to find a way to ease the load on Gibson in the second half. He’s faced the third-most shots (1,069) in the league, and the team allows an average of 33.3 shots per game (27th in the NHL).