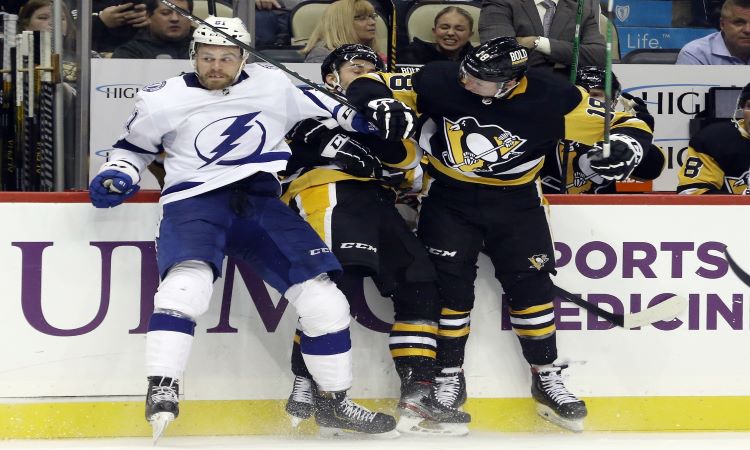 Head-to-head: Season series tied 1-1. The Penguins won 6-2 on Oct. 12 in Tampa Bay, while the Lightning won 5-1 on Oct. 26 in Pittsburgh. The Lightning have won five of the last six meetings between the teams and they’ve combined to play over the total in both matchups this season.

About the Penguins (33-14-8): February was another solid month for the Penguins, who recorded a 6-3-1 record in 10 games. Coming off back-to-back wins over the New York Rangers and Columbus Blue Jackets, Pittsburgh now begins a daunting portion of its schedule, which includes seven straight games against teams currently holding playoff spots.

First up is a date in Tampa with the Lightning on Thursday. Pittsburgh (+240 moneyline) surprised Tampa in the season opener on Oct. 12, tallying six goals without captain Sidney Crosby (wrist) or Evgeni Malkin (knee) in the lineup. Tampa returned the favor with a 5-1 thumping a few weeks later, but Pittsburgh didn’t have its dynamic duo for that contest either. Thursday’s matchup will be the last between these Eastern Conference foes, unless they meet again in the postseason.

Goaltender Tristan Jarry appears to be back on track after posting a 27-save shutout on Saturday against the Rangers. Jarry was pulled for the first time all season last Thursday in Pittsburgh’s 6-1 loss to the New Jersey Devils.  He has allowed four or more goals in five of his last eight outings.

Penguins players to watch: Winger Bryan Rust has six goals and six assists over his last 10 games for Pittsburgh, and has now amassed 18 goals and 24 assists in 33 games this year. Malkin is also hot, netting power play goals in three straight games. He has nine goals and 21 points in 19 games since returning from offseason knee surgery. The Russian has also historically played well against Tampa, notching 25 goals and 29 assists in 40 career games against the Lightning.

Evgeni Malkin has power-play tallies in three straight games for just the second time in his career 🤯 pic.twitter.com/9fTUSpiRf5

About the Lightning (35-11-6): The back-to-back defending Stanley Cup champions have won five straight after claiming a 5-2 victory over the Ottawa Senators on Tuesday night. Tampa erased a two-goal deficit thanks to a four-point night from forward Brayden Point, and Steven Stamkos extended his goal streak to five games. The Lightning are 8-1-1 over their last 10 games, netting four goals per contest while holding opponents to an average of just 2.3.

Tampa prevailed 3-2 on Feb. 26 over the Predators at the Stadium Series outdoor game in Nashville. There, Lightning players were loose and confident, as evidenced by their cowboy-themed outfits prior to the game.

The Lightning are still playing like the best team in the NHL and are finally healthy, aside from defenseman Brent Seabrook’s season-ending hip injury and defenseman Zach Bogosian’s lower-body injury. Not a bad injury report for this late in the season.

Lightning players to watch: Point has six goals and seven assists over the last 10 games for Tampa Bay. Forward Nikita Kucherov also has both a goal and an assist in four straight games. The 2019 Hart Trophy winner, which is awarded annually to the NHL’s Most Valuable Player, has been limited to just 17 games due to injury, but appears to be rounding back into his dominant form lately.