This Week’s Hottest Bets In The NHL: Penguins Keep Rolling Into New Year 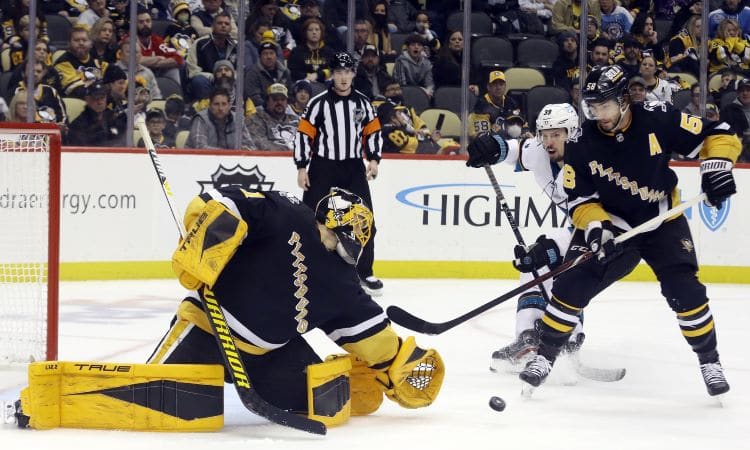 Each week, we’ll take a look at some of the hottest and coldest bets around the NHL, identify the team with the softest schedule, and shed some light on some interesting betting trends.

The NHL is powering through the recent wave of COVID-19, but the virus is still causing some major headaches for schedulers, who continue postponing games on a nightly basis. Strict COVID capacity limits for hockey venues in Canada are forcing the most postponements. Games for many Canadian teams are getting pushed back to later in the season, when the virus is hopefully more under control after the winter months and fans can pack arenas again.

Now, it’s time to uncover this week’s hottest bets in the NHL.

How did the Penguins respond in their first game of 2022 after a 13-day layoff due to multiple COVID postponements? Well, they potted eight goals in an 8-5 win over the San Jose Sharks, and Evan Rodrigues and Bryan Rust became just the second set of teammates in the past 10 years to have a hat trick in the same game. (Ryan Nugent-Hopkins and Leon Draisaitl also did it for Edmonton against the Los Angeles Kings in 2019.)

Pittsburgh will take an eight-game winning streak into Wednesday’s game against the St. Louis Blues, and now, goaltender Tristan Jarry is back practicing with the team after exiting COVID isolation. And if that isn’t enough good news for the Penguins, star forward Evgeni Malkin is expected to make his season debut by mid-January after offseason surgery. The Penguins, now sitting comfortably in a playoff spot in the Eastern Conference with an 18-8-5 record, still aren’t getting much respect from Canadian oddsmakers, though. PROLINE + in Ontario has Pittsburgh with just the 14th-best odds at +1900 to win the Stanley Cup.

The Wild are literally freezing cold after dropping the frigid Winter Classic at Target Field in Minnesota on New Year’s Day to the St. Louis Blues by a score of 6-4. It was the coldest Winter Classic on record, with temperatures plunging to minus-10 Fahrenheit.

The loss was the Wild’s fifth straight, prompting general manager Bill Guerin to promote two of the team’s top prospects — Matt Boldy and Marco Rossi — to the roster ahead of Thursday’s tilt with the Boston Bruins in an attempt to inject some life into his team. It’s worth noting the Wild have been a great “over” bet to this point, posting a 20-11 O/U record. It won’t get any easier for Minnesota, which plays its next three games against formidable foes currently holding playoff positions.

Las Vegas is 22-13-1 O/U to this point and is scoring 3.50 goals per game (4th in NHL), while allowing 3.1 goals against (18th). The Golden Knights are also horrendous on the penalty kill with a 76.8 % efficiency mark (24th). This team will be even deadlier offensively once Jack Eichel, who has been skating for over a month as he rehabs from neck surgery, makes his Vegas debut at some point in the second half of the season. After winning 10 of 12 games leading up to Dec. 31, Vegas will now play three Original Six teams in a row, beginning with the New York Rangers on Thursday.

The Rangers (12-21-1 O/U this season) have played under the total in two straight games and seven of their last nine contests. Additionally, the Rangers have won three straight games overall, including back-to-back victories over the Tampa Bay Lightning and a dominant win over the Edmonton Oilers on Monday. Goaltending and an adept penalty kill are serious strengths for this team, with Igor Shesterkin and Alexandar Georgiev combining for an .967 save percentage since Dec. 1 at times when the team’s been a man short. The Rangers’ penalty kill ranks fourth in the league at 84.8 %, which is important because the club has taken the sixth-most penalties this season, amassing 323 minutes in the box. New York now has a tough five-game road trip that begins Thursday against Las Vegas and concludes next Saturday in Philadelphia.

Anaheim continues to be the best puckline bet in the NHL, posting a remarkable 27-9 ATS record to this point. However, it’s important to note that the Ducks have only covered the spread once in their last five games, suggesting they won’t hold this distinction as the league’s best puckline team much longer. Troy Terry continues to be one of the breakout stories of the year, posting his first career hat trick Tuesday night in a 4-1 win over the Philadelphia Flyers. Anaheim’s fifth-round selection in the 2015 draft now has 21 goals and 13 assists in 35 games for the Ducks.

Columbus has fallen apart defensively lately, allowing 14 goals over its last two contests. In fact, the Blue Jackets have played over the total in six straight games now, but they’ll have a chance to reset against some basement teams over the next week. A pair of contests with the New Jersey Devils (13-16-5) and then a home game against the lowly Chicago Blackhawks (11-17-5) are on the horizon, which could help Columbus get back on track. New Jersey has also been a solid over bet this year, playing over the total in 20 of its 34 games.