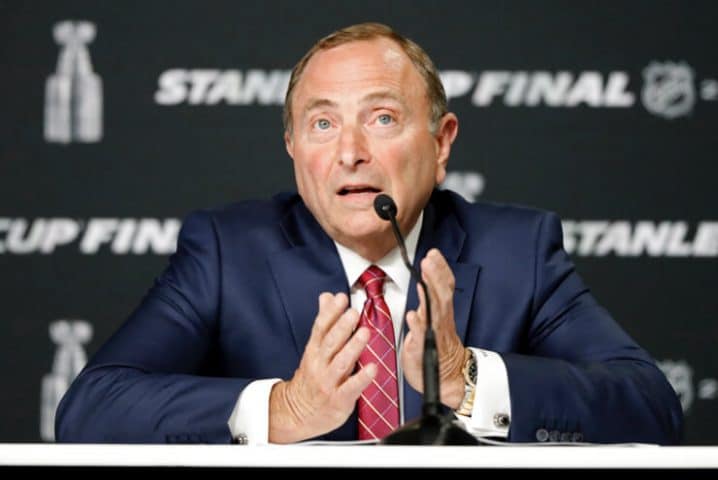 When the U.S. Supreme Court in May 2018 vacated a 26-year-old federal law that had mostly limited legal sports betting to Nevada, the NCAA and the four pro sports leagues that lost the lengthy court battle had to face a new, hard, cold reality.

But one leader seemed to pivot immediately and almost seamlessly — in spite of a long-held antipathy toward such wagering. On Wednesday, NHL Commissioner Gary Bettman explained during a panel at the Global Gaming Expo in Las Vegas how it all happened.

First, Bettman pointed to the early 1990s, a time when he was an NBA executive on the way to landing his current role as pro hockey czar in North America.

“There were a lot of states considering sports betting as a way of generating revenue to give to their lotteries,” Bettman said. “It was a hostile, adversarial relationship.”

“Intellectually and emotionally, I always had the concern about what [legal sports betting] would do to sports,” Bettman said. “There’s nothing wrong with jai alai or horse racing, but we were something different. I wondered how young people growing up seeing athletes as role models would think about them now being used as betting opportunities, and how that would change things.”

But Bettman had two sneak peeks at the new era that would be ushered in by the Supreme Court.

The first of those eye-openers for Bettman was the launch of the Vegas Golden Knights NHL franchise in the fall of 2017.

“We put a team in Las Vegas — and we were the first league to do that,” Bettman noted. “We also began to have a relationship with MGM and [CEO] Jim Murren at that time, and he gets a lot of credit for smartening us up. We had a year or so to understand how [legal sports betting in an NHL city] would work.

“We got very involved in our experience before PASPA was overturned, so we understood the landscape a little better than most [leagues],” Bettman said.

The commissioner offered a practical example: He said he and his staff had initial discussions with MGM about having MGM sportsbooks within walking distance of the MGM-owned T-Mobile Arena where the Golden Knights play ban betting on the local team’s games.

“Then we saw that fans could just bet on their phone from their seat in the arena, so it didn’t matter, it turned out,” Bettman said.

The second edge for Bettman was that as an attorney, he saw the same runaway train heading out of the Supreme Court five months ahead of time that former New Jersey Governor Chris Christie — who spoke at G2E a day earlier — also had noticed. The December 2017 oral argument before the nation’s highest court in Washington, D.C. provided a full-blast “spoiler alert” for anyone who was paying attention: PASPA was on its last legs.

(Former state Senator Ray Lesniak, a founding father of the death of PASPA, and Monmouth Park operator Dennis Drazin also saw it coming; they, too, have law degrees.)

Then came May 14, 2018 — and Bettman was fully prepared to change gears, so much so that just a few months later, the league had a partnership in place with FanDuel while teams such as the New Jersey Devils were free to pursue their own deals.

“Whether I thought [the ruling] was a good idea, what it might do to sports — none of that mattered once the Supreme Court ruled,” Bettman said. “The issue was no longer subject to debate. We just had to get with the program.”

And now that the sports betting he didn’t seek is offered in 13 states, with another half dozen or so soon on the way, we asked Bettman, “Have your concerns been erased?”

“These are the early days, but for this stage of development of sports betting, I think we’re all doing okay,” Bettman said. “We can still learn a lot more, but there haven’t been any major problems where any of us has sat back and had to say, ‘Whoa, we didn’t see that coming.'”

Bettman, clearly proud of his league’s pioneering status, said, “Now all the other leagues are saying, ‘Maybe we should go to Las Vegas.’ But if you look back three or four years ago, we certainly had our share of skeptics.”

In a post-panel media session, a reporter tried to ask Bettman about controversial sports officiating calls and how that fits in with leagues seeking “integrity fees.”
Bettman pounced.

“We have never talked about an integrity fee,” Bettman said — correctly. “To the extent we think that we should be compensated, that is a function of the marketplace. We have never questioned the integrity of our personnel.”

Then there was the question about whether the NBA referee Tim Donaghy’s gambling scandal provided a “lesson” for Bettman and his league.

“I have nothing to do with the NBA,” Bettman said. “We focus on our own personnel.”

And when pressed on whether sportsbook operators might be able to confer with league executives over officiating — given what’s at stake for the books — Bettman again wasn’t having it.

“We don’t have any issues with the integrity of our officials, and we don’t need outside assistance,” he said. “There are lots of judgment calls and non-calls, and if a sportsbook isn’t comfortable with us, they shouldn’t permit betting on our games. But overwhelmingly they do.”

There has been much talk about the NHL’s “puck and player tracking,” and Bettman said that the technology is likely to be tried in the All-Star Game at midseason -—and that it should be ready to be implemented in time for the playoffs next spring.

Bettman said that while he hasn’t asked sports betting operators to pay a fee yet, he said that the tens of millions of dollars the technology costs, and the millions per year more to operate, means that the idea that “we’re just going to give it away — I don’t think so.”

The tech creates 200 data points per second per player — and 10 times as much from the puck.

“The only way to access it will be through us,” he said.

But will fans and gamblers really want to risk money predicting who will have the game’s fastest slap shot or skating speed?

William Hill US CEO Joe Asher, who was on the G2E panel with Bettman, isn’t sure.

“It’s certainly useful from a scouting perspective, but time will tell,” Asher said. “Obviously you don’t want to be the guy who is the slowest skater on the roster. That will get mentioned when your contract is up.”

Since there are 17 NJ mobile betting apps and a similar number of the latter, it might be time to check “official data” to see which number is higher.

Asher, FanDuel CEO Matt King, and Rush Street CEO Greg Carlin all said on the panel that contrary to what industry outsiders might believe, exclusivity is not important to sports betting operators, because the bigger focus is on raising consumer awareness and putting on a united front.

When Asher met with Golden Knights executives for the first time after the NHL green-lighted gaming partnerships two years ago, he said he cut short an explanation of why the team wanted multiple deals.

“I said, ‘That’s fine, we’re not worried about that,'” said Asher. “That’s very much in the culture of Las Vegas. So the arena has [signage for] William Hill, Wynn, Caesars, Cosmopolitan — all in together.”

Said King: “The sad part, for all this talk of sports betting, is that most people in America still think sports betting is not legal. It’s incumbent on all of us, including the leagues and media companies, to make clear what’s legal and what’s not. We have to differentiate it for the consumer, and a united voice is the best way.”

A local reporter asked King if FanDuel Sportsbook is interested in coming to Las Vegas.

“Absolutely,” King replied. “We have a lot of customers who travel here, and we want to go where our customers are. And a lot of our target audience lives here.”

But King said the company had not yet applied for a license, and “there are a few other states in the queue.”

King, Asher, and Carlin said that the barrage of new partnerships among leagues, teams, arenas, and gaming operators all will take time to sort out.

As an example, Carlin noted that while his firm has a good relationship with Wells Fargo Arena in Philadelphia, the recent first game with the new deal in place left him “frankly, a little disappointed with the amount of signage we had.”

Other Rush Street news: Carlin said his company is “close with three leagues in signing deals.”

Judging from Bettman’s teasing Wednesday, the NHL definitely is one of them.

Casinos Are Warned Of The Peril Of Ignoring The Younger Generation