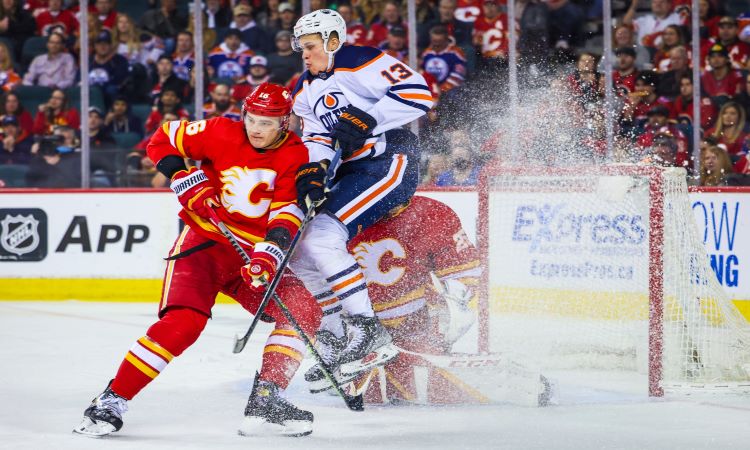 The first round of the Stanley Cup Playoffs concluded Sunday night with the Calgary Flames outlasting the Dallas Stars in a do-or-die Game 7, by a score of 3-2 in overtime.

Five of the eight best-of-seven series required the whole seven games to be decided, and all four division winners advanced. Additionally, only two lower-seeded teams advanced beyond the first round (Tampa Bay Lightning and St. Louis Blues).

Round 2, which begins Tuesday night, will feature a pair of regional battles: Tampa Bay will square off with the Florida Panthers while the Edmonton Oilers take on Calgary up in Canada. Also, the New York Rangers will do battle with the Carolina Hurricanes, and the St. Louis Blues have drawn the Colorado Avalanche.

Here’s a look at the Stanley Cup outright odds after the first round (all odds in this article courtesy theScore Bet):

The analytics community has given the Avalanche an overwhelming 40% chance of winning the Stanley Cup heading into the second round of the playoffs.

Head to-head: The two teams split the four-game regular season series 2-2. However, Calgary has taken the last two meetings by a combined score of 12-6. Both teams won all of their games on home ice in the season series. Calgary will have home-ice advantage in this best-of-seven series as the No. 1 seed in the Pacific Division.

Canadian sports bettors and hockey fans are getting the matchup they had hoped to see at some point, with the Battle of Alberta set to get underway on Wednesday. It’s the first time since 1991 the provincial rivals have met in the playoffs. The teams have met five previous times in the postseason, with Edmonton taking four of the five series.

Both teams went the distance in their opening round series, but will be getting a couple of days off before the start of the next series in Calgary, which should help with fatigue.

Johnny Gaudreau leads the Flames with eight playoff points (two goals, six assists), including the overtime winner against the Stars in Game 7.

Calgary goaltender Jacob Markstrom, a nominee for the Vezina Trophy as the league’s top goalie this year, has started all seven playoff games and allowed only 11 goals (.943 save percentage).

Jacob Markstrom sets the #Flames franchise record for the highest save percentage in a playoff series pic.twitter.com/5xUzFE1LQO

Key betting trend: The home team is 5-0 in the last five meetings between the teams.

Head-to-head: The two teams split the regular-season series 2-2. The last two meetings between the teams were complete blowouts: Tampa won 8-4 on April 24; Florida earned a 9-3 victory on Dec. 30. Florida will have home advantage in this series after claiming an NHL-best 122 points during the regular season.

The Panthers will be looking for revenge in their Sunshine State rivalry with the Lightning, who bounced them in six games in the opening round of the playoffs last year en route to their second straight Stanley Cup. The teams combined for 41 goals in that series a year ago, and the goal-scoring trend should spill over into this year’s playoff showdown.

Florida is loaded with elite talent, but forward Carter Verhaeghe stole the show in the opening round, collecting six goals and 12 points in six games against the Washington Capitals. Even more impressively, he notched the game-winning goals in each of the last three games of the series.

Tampa’s chances of advancing in this series will hinge on the performance of goaltender Andrei Vasilevskiy, who has played every minute of every playoff game for Tampa Bay during its run of nine consecutive series victories. The netminder struggled at times against Toronto’s high-powered attack in round one, but he stood on his head in Tampa’s 2-1 series-clinching win in Game 7, making 30 saves.

A major question mark heading into the next round for the Lightning will be the health of forward Brayden Point, who suffered a nasty leg injury in Game 7 against Toronto. Point, who collected 58 points in 66 games during the regular season for Tampa, is always relied upon to match up against the opposition’s top offensive players. He’s considered doubtful for Game 1, and it will be a huge loss for the Lightning if he can’t return at some point during the series.

Key betting trend: The over is 20-9-1 in the last 30 meetings between the teams.

Head-to-head: The Avalanche took two of the three regular-season meetings between the clubs. The teams most recently played on April 26, with Colorado claiming a 5-3 victory on home ice. The Avalanche will have home advantage in the series as the top team in the Western Conference.

One season ago, the Avalanche swept the Blues in the first round of the playoffs. This year, the Blues find themselves as huge underdogs once again against the top-scoring team in the NHL.

St. Louis boasts an impressive amount of scoring depth, with nine different skaters producing 20 or more goals during the regular season. Forward David Perron leads the team with nine points (five goals and four assists) in the postseason, and former Avalanche forward Ryan O’Reilly and winger Vladimir Tarasenko also have five goals apiece in the playoffs to this point.

Special teams have been a strength for the Blues all season. They finished with the second-highest power play at 27% and the fifth-ranked penalty-killing unit at 84.1%. These specialty units will have to continue to be spectacular in order for the Blues to make it a series.

Colorado’s offense averaged an incredible 5.25 goals per game in the opening series and 16 of their 19 skaters recorded at least one point. Cale Makar leads the team with 10 points (three goals, seven assists), which is the most in NHL history by a defenseman through four games in a postseason.

After 3 points on Monday, Cale Makar is up to 42 points in 39 career playoff games.

Makar's 1.05 points per playoff game are the 2nd-most by a defenseman in Stanley Cup Playoff history behind Bobby Orr's 1.24 (minimum of 30 games played) pic.twitter.com/3Xwyx1AdTK

Key betting stat: The over is 6-0 in the last six meetings.

Head-to-head: The Hurricanes took three of the four meetings with the Rangers during the regular season, outscoring them by a 14-10 margin. All three of Carolina’s wins in the season series played over the posted totals. Carolina will have home advantage in this playoff series.

The Rangers stormed back from a 3-1 series deficit to defeat the Pittsburgh Penguins in seven games. This is nothing new for the never-say-die Rangers, though. The team recorded an amazing 27 come-from-behind victories during the 82-game regular season, an important note for in-game bettors.

Goaltending has been the backbone of the Rangers’ surprising breakout 2021-22 season, but Igor Shesterkin was shaky in the first round. The Russian netminder, who is the frontrunner for the Vezina Trophy after his strong regular season, owns a 3.66 GAA and .911 save percentage through the first seven playoff games, which is way off his regular season marks of 2.07 and .935. He also posted awful numbers (3.63 GAA, .883 sSV%) in two appearances against the Hurricanes this year.

But the Hurricanes also have questions in goal. No. 1 goalie Frederik Andersen suffered a lower-body injury late in the season and missed the entire first round against the Boston Bruins. His status is unknown for Round 2, so Antti Raanta, who won three of the four games in the series with the Bruins, and rookie Pyotr Kochetkov may be part of a goaltender carousel.

Key betting stat: The road team is 4-1 in the last five meetings, and the Rangers have played over the total in seven straight games.