The Colorado Avalanche are the Cup favorites, while 50-50 first-round series abound in the East 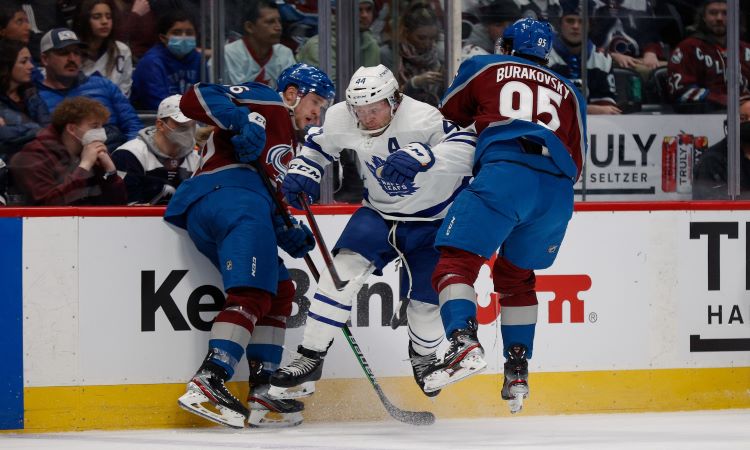 It’s the most exciting time of the year for hockey fans and puck bettors, as the Stanley Cup playoffs get underway Monday night.

Sixteen teams are ready to do battle for hockey supremacy, with the Colorado Avalanche boasting the shortest odds to claim Lord Stanley’s jug. But hockey can provide some of the highest variance among the major sports, giving value to many underdogs.

Here’s a look at the latest outright odds (all odds cited in this article are courtesy of FanDuel):

Colorado and Florida enter as heavy favourites to win it all.https://t.co/EwqAmu8sf3 pic.twitter.com/o94UHwm9Vs

The Rangers are built from the net out and boast the league’s top goaltender, and likely Vezina Trophy winner, Igor Shesterkin. Having an elite goaltender can carry any team deep into the playoffs, but Shesterkin has never played in the postseason before. If he can deal with the increased pressure, New York can be one of the surprise teams of this year’s playoffs.

This is likely one of the last playoff runs for a talented core of Penguins. Evgeni Malkin and Kris Letang are both free agents this summer, potentially leaving Sidney Crosby as the only bonafide superstar on the roster moving forward. All three players have won multiple Stanley Cups with the Penguins, who will be looking to capitalize on one last ride together. One major issue heading into this series is a lower-body injury to starting goaltender Tristan Jarry, who will miss at least the first two games of the best-of-seven series.

88% of the bets (95% of the handle) are on the Rangers to win the series over the Penguins 😳 pic.twitter.com/TwEcwHw5p4

Carolina owned Boston during the regular season, outscoring the Bruins by a whopping 19-1. However, the health of Hurricanes goaltender Frederik Andersen is a concern heading into this series. Andersen is still dealing with a lower-body injury and has been ruled out for Game 1, which means either either Antti Raanta or Pyotr Kochetkov will get the nod in net. Even with the question marks in goal, the Hurricanes finished the regular season on a six-game winning streak, so it’s no wonder they’re slightly favored in the series.

Boston may be at a psychological disadvantage in the series having played poorly against Carolina this year, but the Bruins have posted an impressive 25-10-2 record since the last meeting against Carolina on Feb. 10. The budding confidence of goaltender Linus Ullmark, who posted a 9-1-0 record with a .945 save percentage and 1.50 goals-against average since March 15, could tilt the matchup in Boston’s favor.

The Panthers are the first team since the 1995-96 Penguins to average over four goals per game (4.11). They won 58 games during the regular season and the Presidents’ Trophy for having the NHL’s best record. Additionally, they took two of the three regular-season meetings with the Capitals. Their only concern could be the postseason pedigree of starting goaltender Sergei Bobrovsky. The two-time Vezina winner has posted mediocre numbers in 41 career playoff games, turning in a 3.24 GAA and .899 save percentage. He’s never won the Stanley Cup.

An upper-body injury forced Alexander Ovechkin to miss the last three games of the regular season, and the health of the 50-goal man is a major question mark heading into the series. Ovechkin is back practicing with the team and has declared himself ready to return to action, but is he at 100%?

The Maple Leafs find themselves as favorites against the defending Stanley Cup champions despite losing seven straight playoff series. There are major psychological hurdles for this team to overcome in order to advance, and their disgruntled fans will turn their backs on the club quickly if they have a subpar showing at home in the first two games. Still, this Leafs team is stacked with talent and can certainly knock out the playoff-proven Lightning, especially if Auston Matthews continues to shoot the lights out and build on his 60-goal total this season.

With all of the pressure on Toronto, the Lightning find themselves with the rare opportunity to three-peat as Stanley Cup champions, which hasn’t been done since the New York Islanders captured four straight titles from 1980-1983. One major advantage Tampa has in this series is in goal. Andrei Vasilevskiy has been spectacular during the team’s last two postseason runs, posting identical 1.90 GAA marks while recording save percentages of .927 and .937, respectively.

Fans of the Toronto Maple Leafs are sick and tired of losing in the first round of the playoffs. Oh, what an opening series it should be! Good preview here from @CANSportbetting: https://t.co/ZrCZOpOzLr

The Avalanche have lost in the second round of the Stanley Cup playoffs in each of the past three seasons, and in the Predators, they’re squaring off against the only team that defeated them three times in the regular season. Oddsmakers don’t seem worried about the high-powered Avs, though, as evidenced by the series odds. Colorado is the odds-on favorite to win the Cup for a reason, and anything short of a deep run will be a major disappointment.

A potential issue for the Predators is that goalie Juuse Saros’ status is uncertain after he left a 5-4 overtime loss to the Calgary Flames on Tuesday with a lower-body injury. Entering Sunday, Saros led the NHL in starts with 67 and posted an impressive  2-0-0 record with a 2.94 GAA and .914 save percentage against the Avalanche. Nashville, which had the 18th-ranked penalty kill (79.2%) in the league during the regular season, spent over 455 minutes shorthanded this year. If the Predators can’t stay out of the penalty box, Colorado’s seventh-ranked power play (24%) will end this series quickly.

Calgary may be Canada‘s best chance of claiming the country’s first Stanley Cup since 1993. The 50-game winners have a trio of 40-goal scorers (Johnny Gaudreau, Matthew Tkachuk, and Elias Lindholm) making up their top line and a goalie, Jacob Markstrom, who will likely qualify as a Vezina finalist. The Flames took two of the three regular-season matchups with the Stars and have a relatively clean bill of health heading into the series.

The Stars’ top line of Roope Hintz, Joe Pavelski, and Jason Robertson has scored over 45% of the team’s goals this season. Getting some secondary scoring will be crucial if Dallas hopes to contend in this series. The series will mark just the fourth best-of-seven series in the past 21 years to feature four players with 40 goals in the regular season. Whoever can get more secondary scoring in the series should prevail.

Both of these teams had up-and-down seasons, and the Oilers took three of the four regular-season matchups. Connor McDavid, who enjoyed a personal-best 123-point season, became the seventh player in NHL history to win at least four scoring titles (Wayne Gretzky, Mario Lemieux, Gordie Howe, Phil Esposito, Jaromir Jagr, and Stan Mikita are the others). The 25-year-old phenom and BetMGM ambassador is also proficient at scoring in the postseason, collecting 22 points (11 goals, 11 assists) in 21 career playoff games.

The Oilers will enter the playoffs with a 19-4-2 record over their last 25, the second-best record in the NHL over that span.

The Kings will continue to rely on their defensive style to contain Edmonton’s potent attack. That strategy, of course, is contingent upon strong goaltending, and Jonathan Quick has no shortage of playoff experience. The 36-year-old has won two Stanley Cups with the Kings (2012, 2014) and will attempt to turn back time and regain his elite ability when it matters most. Quick is 46-39 with a 2.23 GAA and a .922 save percentage in 85 career playoff games. He’s also recorded nine career shutouts in the postseason.

This series has the potential to be be the most competitive and entertaining of the first round, and the best sweat for bettors. St. Louis has won 12 of the 14 meetings between the clubs since the start of the 2019-20 season, but five of those victories came in overtime and two more were tightly contested one-goal games.

The Wild have a crucial decision to make in goal: Marc-Andre Fleury or Cam Talbot? Dean Evason could go with Talbot, who outplayed Fleury down the stretch by posting a 13-0-3 run to end the season, or he could give the net to Fleury, a proven playoff performer who boasts three Stanley Cups and owns the fourth-most playoff wins in NHL history. Either way, expect whoever takes the net in Game 1 to have an extremely short leash.