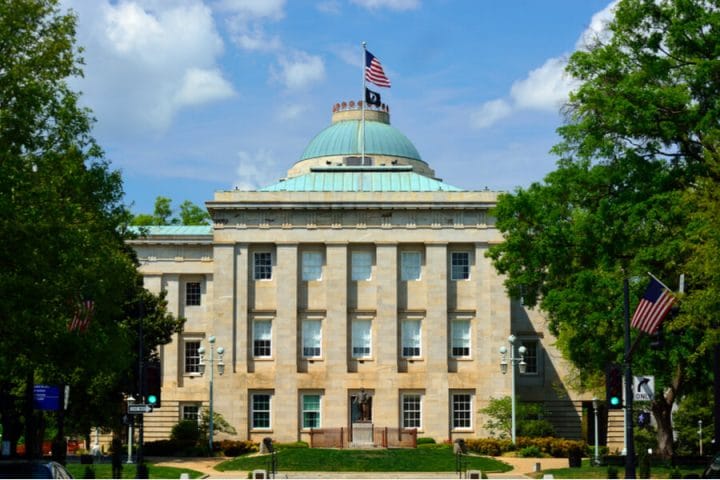 The latest state to join the U.S. sports betting equation is North Carolina, after Democrat Gov. Roy Cooper on Friday put his signature on legislation to allow two tribal casinos to have sportsbooks.

The Eastern Band of Cherokee Indians are expected to open sportsbooks at their pair of casinos in Western North Carolina, both of which are operated by Caesars. The casinos — Harrah’s Cherokee Casino and Harrah’s Cherokee Valley River Casino — have not yet indicated when the new books will open.

Senate Bill 154 cleared the North Carolina Senate on April 9 by a 43-7 vote. It stalled for several months before clearing the House on July 15 by a 90-27 vote.

The short two-page bill was presented to Cooper on July 17, and he took nine days to sign it. It’s fair to call the bill just slightly more than one page in length, which would make it the shortest sports betting bill to pass in the roughly 14 months post-PASPA. The bill simply added sports betting to the list of approved Class III gaming under the state-tribal compact, with no additional regulation coming from the state. Tribal gaming is regulated by the federal government.

The legislation is in effect, so the tribal casinos could open books in time for the upcoming NFL season. Unfortunately for the upcoming books, the Carolina Panthers, based in Charlotte, aren’t expected to have a strong year. New Jersey sportsbooks have the team as +5000 to win the Super Bowl. Their over/under win total is a modest 7.5 games.

Mobile/online in the cards?

According to a report from The News & Observer, the tribal sports betting legislation is expected to generate between $1 mm and $1.5 mm in additional annual revenue for state coffers. That’s not a ton of money, and it pales in comparison to the tens of millions of dollars potentially on the table under statewide adoption. Under state-of-the-art online/mobile, the state has the potential to see about $7 billion in annual sports betting handle, according to a 2017 study from Oxford Economics.

Much more attractive for the state would be the implementation of full-fledged online/mobile wagering, potentially through commercial operators like a FanDuel or DraftKings.

There’s a separate bill on the table still being debated that would create a North Carolina Gaming Commission, which would be tasked with conducting a study on statewide sports wagering. North Carolina has long been wary of gambling, so it’s no surprise the state would go the study route.

The gambling study would be conducted relatively expeditiously. The North Carolina Gaming Commission would be required to report its findings, including any proposed legislation, to the Joint Legislative Oversight Committee on the State Lottery on or before Feb. 15, 2020.

North Carolina is the seventh state to pass a sports betting bill in 2019. It joins:

There are currently 10 states with active sports wagering, with the most recent launch coming in upstate New York. Only half of the active states have allowed online/mobile betting.

If you include North Carolina, there could be 15 states by year’s end with sports betting in some form, as Indiana, Iowa, New Hampshire, and Montana are expected to take bets in a retail setting this fall.

Oregon and Washington D.C. are also on the radar, but it’s unclear when they will launch their respective markets. Maine lawmakers delivered a bill to the governor last month, but it wasn’t signed and is now stuck in limbo pending further legislative action.

The states with time on the clock still left in 2019 are Michigan, Ohio, and Massachusetts.