His Kentucky Derby drug case is still pending, but two racetrack operators have sought to suspend him 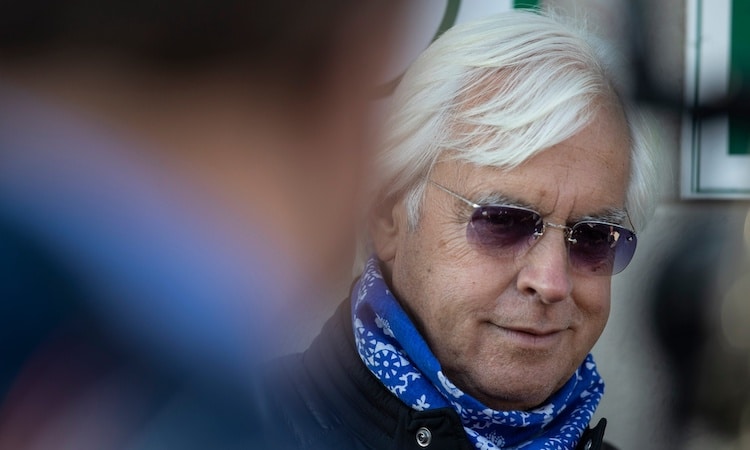 The ongoing saga of Bob Baffert’s battle with segments of the horse racing industry progressed ever so slightly Monday, when the New York Racing Association held its first hearing to assess whether the trainer should be suspended from racing and training at its racetracks.

Before testimony began on the minutiae of seven different drug positives for Baffert-trained horses from 2019-2021, the opening statements featured incendiary accusations and borderline posturing.

NYRA’s lawyer, Henry Greenberg, referenced the list of drug positives in his opening statement but stressed the impact of Baffert’s comments and excuses in response to those tests.

“This man … took a wrecking ball, over a two-year period, to the integrity of the sport that was so good to him for so many years,” Greenburg said. “He sullied and soiled, in one year — 365 days — three of the great races in America: the Arkansas Derby, the Kentucky Oaks, and the Kentucky Derby. Throughout that period, not once, not once, did he take responsibility for his actions, did he express contrition. Time and again, again and again — six times — he would blame others to try to avoid responsibility for his own action.

“This rampage of doping violations … in a 14-month period by regulators in Arkansas, Kentucky, and California, in the modern history of thoroughbred racing, we can’t find anyone that can recall anything like it from a prominent trainer.”

In his own opening statement, one of Baffert’s lawyers, Craig Robertson, accused members of NYRA’s board of directors of “a personal vendetta against Mr. Baffert.”

“It’s theater. It’s theater designed to obscure the true motive of what they’re doing, which is to try to ruin this man’s Hall of Fame career, because a few board members have a personal vendetta and want to eliminate a competitor,” Robertson said. The NYRA board features several prominent horse owners and breeders, and Robertson said the “vindictiveness of NYRA has no bounds.”

NYRA suspended Baffert from racing at its tracks (Aqueduct, Belmont Park, and Saratoga) May 17, shortly after one of the horses he trained, Medina Spirit, tested positive for a the drug betamethasone after he won the Kentucky Derby. Betamethasone, a corticosteroid, is not allowed in a thoroughbred racehorse’s system on race day in Kentucky.

A statement announcing the trainer’s suspension indicated the decision was made in the “best interests of thoroughbred racing.” Baffert is arguably the most decorated trainer in the history of the sport. He has seven Kentucky Derby wins and two of his horses won the Triple Crown — American Pharoah in 2015 and Justify in 2018.

Now that they're done arguing about evidence admissibility, here is the first slide of NYRA's opening presentation. pic.twitter.com/UtEXoL2yVe

In July, a federal judge ruled NYRA’s suspension was unconstitutional, citing the absence of a hearing and due process, which led NYRA to create procedures for hearings to address such cases. O. Peter Sherwood, a retired Supreme Court Justice in New York, is the hearing officer in the Baffert case.

Churchill Downs Inc. has also suspended Baffert from racing at its properties, but there are indications that decision will be contested in court ahead of this year’s Kentucky Derby.

The horse at the center of the controversy, Medina Spirit, died Dec. 6 during training, and his death is being investigated by the California Horse Racing Board. Meanwhile, the Kentucky Horse Racing Commission has yet to schedule a hearing for Medina Spirit’s positive test from the 2021 Kentucky Derby, which was run May 1. Medina Spirit has not been disqualified from his Kentucky Derby win, although he might eventually be, and the case has not been adjudicated, nearly nine months after the race.

Integrity of the sport and Baffert is an issue

One of the planks of NYRA’s case appears to be not only the Baffert drug positives, but their impact on public perception and public trust in the sport, along with the trainer’s reactions and comments about those drug test results.

During hours of questioning of former New York State Gaming Commission lawyer Rick Goodell, Greenberg gave examples and played videos of Baffert denying Medina Spirit was administered betamethasone in the immediate aftermath of the positive test. Baffert’s lawyers frequently and emphatically objected to the evidence presented by Greenberg, especially the videos, and were often overruled by Sherwood.

NYRA’s tactic is similar to that deployed by Churchill Downs, whose CEO, ​​Bill Carstanjen, recently told The New York Times that Baffert has a “well-worn playbook of obfuscating the facts, inventing excuses to explain positive drug tests, and attempting to blame others to avoid responsibility for his own actions.”

In past cases, Baffert has claimed positives were triggered by stable employees eating poppy-seed bagels, contamination from his assistant trainer using a Salonpas patch, and from a horse eating hay that had been urinated on by a groom who had taken cough syrup. One of the cases emphasized in the complaint from NYRA cited a California racing board report that said, “Baffert stated he thinks someone is intentionally giving [phenylbutazone] to his horses and mentioned that he would be offering a reward to help solve the case.”

NYRA’s representatives also have tried to make the case that Baffert’s actions have harmed the credibility and public perception of the sport. Greenberg even attempted to enter into evidence content critical of Baffert, including tweets, TikTok videos, and a segment on Saturday Night Live. Those efforts were denied by Sherwood.

After the opening statements and arguments over the admissibility of evidence, the vast majority of the hearing was spent in questioning of Goodell, the former gaming commission lawyer. Greenburg, through hours of questioning, reiterated nearly every detail of every Baffert drug positive from 2019-2021 and occasionally asked how those types of infractions would have been treated in New York, although none of them occurred in New York.

Robertson, during his opening statement earlier, said Baffert has never been accused of breaking the racing rules in New York during the 30 years he has raced horses there, although his horses primarily race in California.

The crux of the case, however, may simply be whether NYRA has legal authority to suspend a trainer, as opposed to the gaming commission, which is the agency tasked with regulation of horse racing in the state.

NYRA has argued that it should be allowed to make those decisions if it deems actions are “detrimental to the best interests of racing.”

“The evidence will show NYRA had an obligation to act. It had an obligation to protect the sport of thoroughbred racing and its integrity,” Greenberg said. “Institutions like NYRA, Churchill Downs, and other operators of racetracks have a social license, between them and the public, which holds [accountable] those people who use animals or horses for wagering opportunities.”

The Baffert contingent contends, however, that suspensions and discipline should be handled by the state gaming commission, and since the trainer has never run afoul of it, sanctions should not be applied. The trainer’s lawyers have also made various cases to diminish the significance of the positive drug tests, including labeling them as “minor overages.” That tactic appeared to work in Arkansas, where the state racing commission both overturned both Baffert’s suspension and two disqualifications at Oaklawn Park.

“The actions taken by NYRA here are unprecedented,” Robertson said. “They’ve never done this before. … They just now created rules and procedures that they’re trying to apply to Mr. Baffert. They created them three months ago, after they first tried to suspend Mr. Baffert and a federal judge said ‘no.’ …

“The regulatory body that governs horse racing in New York, and that controls all medication violations and rulings and suspensions, is the [gaming commission]. It’s not NYRA,” Robertson said. “The [commission] knows there is no legal basis to suspend Mr. Baffert.”

The hearing is scheduled to continue Tuesday morning and is expected to last at least several more days. After Greenberg completed his questioning of Goodell, Baffert attorney Clark Brewster was still cross-examining when the hearing was halted just after 5 p.m. ET. A complete statement of NYRA’s charges against Baffert can be found at this link.